Honeymoons and one winged hawks

So I just came back from my honeymoon. Ok, so it's technically not your honeymoon if you go eleven years and one month after you get married but still, when you spend the weekend in a honeymoon suite you can pretend, right?! :)

Every summer my mom hosts "cousins camp" at her house. She invites all the grand kids to come spend a few days making crafts, making a mess, and running wild through her house so the parents can spend a few days NOT having to make crafts, clean up messes and telling their kids to stop running wild through the house. It's glorious. :) My kids look forward to it all year. This year they even got to go to a rodeo, which Josh was fascinated by. It's a good opportunity for them to spend some time with the cousins that they don't get to see very often and it's a great opportunity for me and Shawn to run for the hills!!


Every year we always to find something fun to do for those few days without the kids. This year we decided to rent the honeymoon suite at a fancy hotel in Salt Lake City and go on our honeymoon. :) We had a really great honeymoon when we got married, but sometimes it's fun to drop your kids off and go on another one. Who says you only get to have one?!


So I've been looking forward to this trip all month. Shawn has been so many working 60+ hour weeks lately that I've practically forgotten what he looks like, so it was nice to just drop everything and get out of town for a few days.


Unfortunately the trip hit a few bumps along the way! Last Thursday morning when we dropped the kids off at my moms house, we were all prepared to hit the road and head to Salt Lake. and then halfway to the interstate the brakes on our van started making a horrible grinding noise. Faaabulous. So instead of getting to Salt Lake by noon like we'd planned, we spent the entire morning waiting to get our brakes fixed, and by the time we were on the road we'd kind of wasted most of day one of our adventure. That's OK though. Shawn and I can turn anything into a good time. We amused ourselves by looking at National Geographic photos in the lobby of the repair shop. Fun times. :) And on an unrelated note, I'm insanely jealous of National Geographic photographers. Can you imaging what an amazing job that must be?!


Anyway, we did eventually make it to Salt Lake with fixed brakes and had a wonderful trip. We stayed in a beautiful hotel and enjoyed spending some time seeing the sites in Salt Lake. I grew up three hours from Salt Lake, so we used to go all the time when I was young, but I don't get the chance to go there nearly as often anymore, so it was nice to go see what was new and visit some old places that I've always enjoyed.


One of my favorites (of course!) is the zoo! I love to go to the zoo in Salt Lake, and I love to go to the zoo without the kids because no one ever wants to sit and look at the animals for as long as I do! Shawn is a saint, he pretty much spent the day waiting while I took a zillion photos and then sitting on the bench watching the monkeys with me, which is my favorite part of the zoo! Seriously, I don't think anyone enjoys going to the zoo as much as I do. Anyone who goes with me gets bored waaay before I do. Shawn's a good sport.


After that we found the greatest thing in Salt Lake that I never knew exsisted. The Tracy Aviary. How have I been to Salt Lake so many times and never known about this little gem?! It's basically like a whole other little zoo, but it's just full of birds. Heaven! It's such a nice place and they have a lot of really cool birds. They have several there that they've rescued that can no longer live in the wild. They have a hawk there that was injured in the wild and lost a wing. It was rescued and now lives in the aviary and it's a really beautiful bird. I'm glad that there are places that will take in injured animals like that and let them live out their lives in a safe environment. Anyway, I took all sorts of photos of the hawk, but I haven't had a chance to go through them all yet, so I just have this one to share: 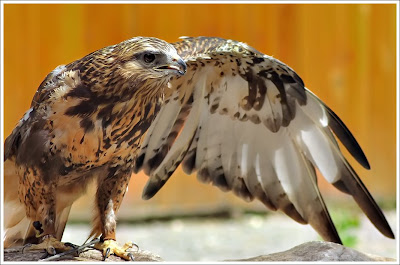 Oh! And we saw a California Condor, which was fun since you don't really see them very often. I think they're the funniest looking birds, so of course I got out the camera again. 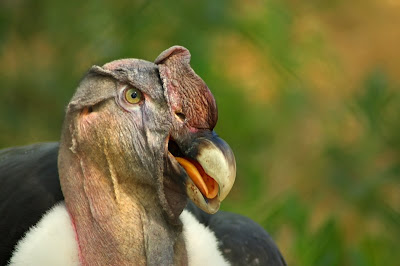 Now that is a face that only a mother (and Wendy the crazy bird lady) could love. :)

I took a TON of pictures, but I haven't had a chance to go through them all yet. I got some really beautiful ones of an owl and a type of Cardinal and several other interesting animals. I was actually waiting to make this post until I'd had a chance to go through them so that I could post them all here, but life has gotten in the way, so I figured that if I waited until I had the photos organized it might be weeks before you heard from me.

So all in all it was a really fun trip. I have some more stories to tell you from the trip, but I think I might save them until tomorrow. I have an interesting Clarissa story to tell that might just deserve it's own post.

For now I have to go finish reading Breaking Dawn before I have to pick up Josh from a birthday party in an hour. I'd better get to work! :)

wow...so happy to find a pic of a one winged hawk....so sad tho. I had a dream of a one winged hawk last night....my daughter,age 30,loveslovesloves hawks,and she is going thru some very difficult times...so i am assuming the dream was about her. In the dream the hawk was still flying,but crying.
Thanks, Susan (CA)
ps your family sounds wonderful!

Hahaha, you're not fooling anyone, you never put hat camera away, LOL! :) Are you on facebook, that's where I put most of my photo's that don't make it to my blog, I'd love to see some more of yours if you'd like to share.

Yay for a fun hubby wifey trip, how did the boys do? I hear you about the photos taking forever sometimes... I think sometimes people that don't shoot in RAW wonder why we always sit on our photos, like there's no more work involved once you upload them...

Tracy Aviary is awesome! They have events for every holiday, too. The Easter Egg hunt is alyways fantastic... there are always peacocks wandering around the fields as you search for eggs. We have had yearly passes before, because its just that much fun.