She lived in righteousness and died a saint

I said that I had a Clarissa story to tell, and I do, but this is not a story about our Clarissa, it's the story of Clarissa's namesake. Before I begin, I thought I'd mention that this is a story that includes some history of the LDS church. If religious history and stories aren't really your thing, you can't say I didn't warn you before you started reading. :)

Before I get to the reason I'm telling this story, let me tell you a little bit about the life of Clarissa Reed White.

Clarissa was born in New Hampshire in 1814. She moved with her family to Ohio when she was young and her family joined the LDS church less than a year after it was organized by Joseph Smith.

She became Joseph Smith's housekeeper and he introduced her to a man named Levi Ward Hancock, whom she later married. Clarissa and Levi eventually moved their family to Far West, Missouri, where unfortunately the LDS church was not well accepted by the people in that area. We have a pretty good history of Clarissa's life and one part that always stands out to me is a part where it's explains how she gave birth to her fourth child while mobs stood outside and threatened to kill every LDS member they could find. What a scary time that must have been for their family.

They endured a lot while in Far West, and Clarissa was so strong during that time. She helped make rifle bullets, nurse the wounded and even defend her home. In Far West when the weapons were taken from the LDS people, she told a group of women "We can do as the Carthege women did when the Romans took the arms off their husbands. We can pull the hair our of our heads so the men folks can make bowstrings." What a tough woman she was. Clarissa is someone who I would love to have known.

In 1839 they were forced from their home in Far West and had to leave their farm and home behind to find a safer place for their family in Navoo, Illinois. In 1847 when it became clear that the LDS people were no longer safe in Illinois they started the trek on foot to the Utah valley with many other LDS pioneers. In the end 70,000 members of the LDS church made the 1,300 mile journey in covered wagons and on foot from Illinois to the Salt Lake Valley. I can't imagine how hard that must have been for those people.

When the reached the Salt Lake valley, Clarissa's husband Levi decided to continue on to Southern Utah, where they were settling more colonies. After already making a very long journey Clarissa had decided that she'd had enough. Levi and Clarissa divorced and he went on to Southern Utah alone.

Clarissa eventually met and married Thomas Jones White, who was from England and had traveled to the Salt Lake Valley alone.

They settled in Salt Lake and that's where Clarissa spent the rest of her life. She died in 1860 from pneumonia, leaving behind several children, including a young baby.

I wish that I had the time and space to tell you more about Clarissa because she was truly an amazing woman. We are lucky to have a pretty good life history of her and I've enjoyed learning about her life. While going through family history one day we came across her story and there was no doubt in our minds that we wanted to name our daughter after this courageous woman.

So now I get to the point of my story.

While we were in Utah last week we realized that Clarissa is buried in Salt Lake and we thought it would be neat to go visit her grave. It was a really amazing experience and I thought I'd share a little of it here.

Clarissa is buried in the Salt Lake Cemetery, which is a pretty big place and we had no idea where she was buried. We drove into the cemetery and realized that we were looking for a needle in a haystack. We didn't really know how to find her so we just started driving, hoping we'd figure it out. So we drove up the first path and took a left. We drove a little more, took another guess and took another left. We drove halfway down that path, stopped....and there she was! We literally drove into that cemetery and drove directly to her grave like someone had given us exact directions. It was an interesting experience that left us with goosebumps.

Clarissa's grave is very neat to see. The original headstone is still standing, although you can no longer read it. It looks like it's made out of clay, and it has worn down over time, but at some point descendants of Clarissa have added two more modern markers to her grave site.

Here are some photos, although I wish that we had been there when the lighting was better. The sun was really bright and it was hard to get good photos.

The tall headstone is the original stone that was placed when she died. You can make out a few small words on it, but for the most part you can't tell what was originally on it. 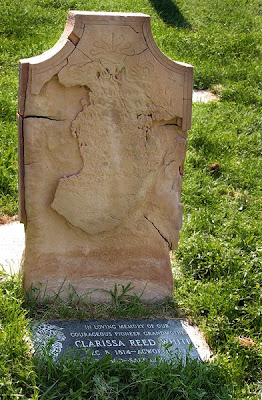 Here's a close up and you can make out a few words. From what I can tell it probably said "Wife of Thomas Jones White". 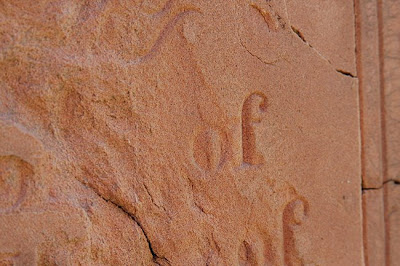 These are the two markers that have been placed later. The first one is easy enough to read. 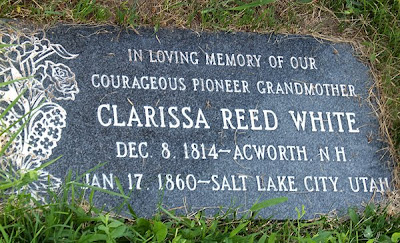 This second one appears to be older, although I have no idea how old. 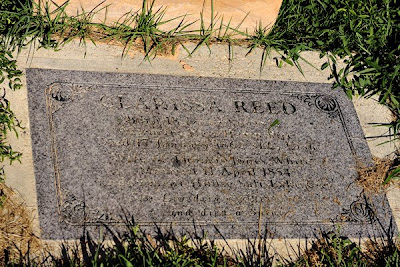 You can't read the words on it here, but it says:

That last line is really powerful to me. What a wonderful tribute to Clarissa. I'm grateful to her for all that she endured in her life, that she came across the plains to Utah so that she could continue on in the LDS church, raise her children to follow in her path and pass that down several generations later to my husband. I hope that we can raise our Clarissa to know the great woman she was named after, and I hope that she uses Clarissa as an example of strength and courage in her life.

So there you go, the story of Clarissa. I know that it was long, but I hope you enjoyed taking the little journey with me. We're going back to Utah in a few weeks, so we may be visiting Clarissa again, this time with our kids so that they can learn a little more about their special ancestor as well. I can't wait for the day that we can take our own little Clarissa there to visit and to learn more about the amazing woman she was named after.
Posted by Wendy at 5:13 PM

Stories like that just give me chills. That is awesome. I have 6 pioneer ancestors (3 couples) who came to Utah from Europe, pre railroad. I just love stories like this.

Wendy, can you send me your email address! I have a lot to talk to you about! I used to be on the way old BBC August 03 board, and occasionally visited the LDS board too! I recently found your blog off of one of your posts and bookmarked it! I just got on here tonight and still can not believe what I read! My maiden name is Hancock and Levi and Clarissa are my great-great-great grandparents! I got the chills reading your story! tayvak@yahoo.com

That was an awesome story and your little girl will be such a little pioneer of her own. I got tears in my eyes reading the last line of her stone. How wonderful would it be to have someone thing that about you? Then I came here and read Tayva comments and got total chills. Who says everything doesn't happen for a reason? I believe it does!

That's really cool, I totally teared up when you spoke of taking little Clarissa to see Grandma Clarissa's grave, not that she's there, but that it kinda brings the story full circle. Makes me wanna go digging through my family history a bit more. :)

Wow. I hope someday someone says that about me.

I am a convert, so no pioneer ancestors here! But my husband has some. :)

That is amazing! I am a descendant of Clarrisa and Thomas and never knew that history! I would love to know more if you have it, please email me if you do: johnwil AT byu DOT net

Thank you for the story. I am also a descendant of Clarissa Reed and Levi Ward Hancock. I don't know much about her life, only about Levi her first husband. I would love to have a history of her in her own words. Do you have one?

Wendy, I was so happy to "stumble on your blog. I, too, am a great great grandaughter of Clarissa Reed White. My grandmother was Mary Layman White, whose father was Thomas Reed White, whose mother was Clarissa Reed White. I would love to share stories with you about some of our wonderful ancesters. May I use your pictures of her tombstones? My cousins, Betty Poulson and her sisters and brothers placed one of the tomestones at Grandma Clarissa grave a few years ago. Please email me. Thanks, Maxine

I am related to Clarissa through Thomas Jones White. I have a much clearer picture of the second head stone if you would like it. I don't know how to get it to you.

My Grandfather is Floyd Bird. His mother is Lydia Davis White. Her father is Hyrum Reed White. And his parents are Thomas Jones White and Clarissa Reed White

My husband descends from Levi Ward Hancock, Clarissa's first husband, and one of his other wives, Ann Tew. His fraternal grandmother was Edith Emily Hancock. There is a rich history of faithfulness in this family. It has been fun to learn about them recently.

I am also a descendant of Levi and Clarissa and I would love to have the stories that you have gathered. I am going to the cemetery this weekend and so happy that I have found your blog.

I am also a descendant of Levi and Clarissa and I would love to have the stories that you have gathered. I am going to the cemetery this weekend and so happy that I have found your blog.

Teri, send an e-mail to my husband at Shawn15@aol.com and he can get you the info we have! :) I'm glad you found my blog!

I sent your husband an email and just wanted him to check to make sure it didn't go in his junk mail. Thanks

I am a descendent of Levi Ward Hancock and Clarissa Reed. I would love to see the stories you have gathered.

Melissa, email my husband at Shawn15@aol.com and he can forward you the info! :)

Anyone else who reads this is welcome to do the same. I'm happy that my blog post has brought us all together! :)

Wendy. My great great grandfather was the brother to Carissa..
Have you seen the book. 500 wagons stood still that gives a pretty good description of Clarissa's life.