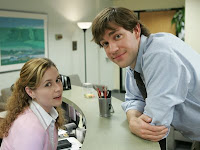 If you don't want to hear about what happened on the season premier of The Office last night, move along now, there's nothing to see here! :)

And for the rest of you, did you LOVE it?!! Ahhh, finally the Pam and Jim moment that we've all been waiting for, and it couldn't have been more romantic. I totally didn't see it coming, which is actually better than it would have been at the parking lot party when we were all expecting it. The rain and the rest stop...SOOO freakin' perfect.

And what's up with Angela?! Here's what I've never understood about her. She was always SO secretive about Dwight and she never wanted anyone to know about her personal business, but she's always been very open about Andy. If she loves Dwight (and we all know she does!!) then why doesn't she just get back together with him already?! Why is she so insistent on keeping that relationship a secret and why in the world is she going along with this whole wedding thing? It's more than obvious that she doesn't want to marry Andy. Poor Andy, it's totally going to break his heart when the whole thing blows up, and we all know that it's going to!

And how great is it that Ryan is the temp again?! Classic. Everyone in the Office hates his guts.

And Michael and the new HR lady?! They've totally got to get together. Michael has met his perfect woman. She's a total dork like he is, but at least she seems to have a little more common sense. He needs her.

Ah, I love that show. I've seen every episode a million times. We have all the DVD's and I've practically worn them all out. The whole Jim and Pam saga is the best love story on TV EVER! My two favorite episodes of all time that I can watch a million times and never get tired of, are the Booze Cruise, where Jim almost tells Pam that he loves her, and Casino Night, with the big moment at the end. So perfect.

So if you watched the show last night, let me know how you liked it! I've already watched it twice and I think I'm going to watch it again today!

On a completely unrelated note, we got to go to Josh's school this morning because he won a special citizenship award! Yay! I was SO proud of him and I could really tell how proud he was of himself. They had a little ceremony before school started for all the kids getting awards and it was fun to see him go up there and get his certificate and be congratulated by the principal. The school got a new principal at the end of the school year last year and he's SO fantastic. This awards ceremony thing is something that he came up with. I think they're going to be doing one every month to honor kids that the teachers think have gone the extra mile that month. I've always really loved that school, but ever since he became the principal I love it even more. I can tell that he's working hard on coming up with new ideas and fun things for the kids. We're lucky to have our kids in such a fantastic school.

So I guess that's all I have to talk about today! I think I'm going to go watch the Office again! I haven't had enough of the proposal in the rain yet! :)
Posted by Wendy at 10:05 AM

Seriously, how great was that whole proposal thing?! LOVE IT! You should check out this clip: http://www.hulu.com/watch/36721/the-office-angela-answers-back#s-p1-st-i0 Probably have to cut and paste. Hope it works. And way to go for Josh! What a kid!