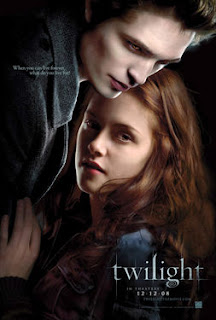 I've been waiting for this weekend for quite a while; it was the opening weekend of the movie Twilight!

We trade date night babysitting with some friends of ours, so we arranged to have the kids go play at their house for a while today so that we could go see the movie. We got there an hour early and there was already a line forming! I love the excitement at the theater when big movies open. We've waited in line on opening weekend for all the Harry Potter movies, the Star Wars movies and a few others. It's fun to be in the theater with all the really die hard fans. There was actually a preview for the new Harry Potter movie at the beginning of Twilight and apparently the Twilight crowd is also the Harry Potter crowd because everyone clapped and cheered at the preview. I love that. It's fun to feel like everyone in the theater is all in on the excitement together.

So anyway, the movie was awesome and I already can't wait to see it again. I really applaud Stephanie Meyer for writing a story that is so clean. It's nice to see a movie that isn't full of language and sex. Movies like that are unfortunately becoming harder to find these days. I think the fact that Edward and Bella can't really be together is way more romantic and exciting that if it had just gone like most movies and there were in bed in the first hour.

I thought they did a great job with the casting! When I first heard that they were making a movie from the book I thought that there was no way that they were going to find anyone who could play Edward and be as stunning and perfect as they described in the book. I was wrooong, they found a perfect Edward! Is it wrong to be 33 years old and have a crush on Edward Cullen?? :)

So that was our fun afternoon at the movies. When we came out of the theater it was raining and by the time we got home it was snowing! Now that we've hit November I'm totally ready for the snow. I love it when we're home on the weekend and it's all cold and snowy outside. I'll take any excuse I can to turn the fireplace on and curl up in a blanket. I'm thinking that today might be a good day to start rereading the Twilight books!
Posted by Wendy at 4:31 PM

I JUST bought the first book! (I'm a little late getting on the bandwagon..lol!). I'm looking forward to reading it even more now that everyone is talking about the movie! :)

Well if it's wrong to have a crush on Edward, then so be it, because I am in LOVE with him too. And I am 31! I just read all 4 books in like a week and saw the movie last night. Like you said...well cast and good! I am excited to see what they do with the next movies. Can you imagine the 4th book as a movie? It's gonna be good! Oh, I guess I should mention that I have been following for awhile now through the Bargain Hunters. Love your blog!

visit Stefanie Meyer's website where she's started writing Twilight from Edward's point of view! It's not finished (and it may not ever be....the site explains) but it puts an amazing spin on things...

Don't worry Wendy, I am in love with Edward too...and I am 32! It was a fabulous movie (I went at midnight) and I can't WAIT to see it again!