Recently I discovered Facebook. I didn't think that I was a Myspace/Facebook kind of person, so it's never really been my thing. But then a couple of months ago someone invited me to be their Facebook friend so I decided that I would set something up over there, and then suddenly I started finding all sort of people who I haven't heard from in years! I'm incredibly nostalgic about the past and I hate losing touch with people, so Facebook has been awesome. I'm loving catching up with people and hearing what old friends are up to.

Last night on Facebook I discovered one of the kids I used to nanny for. When I was 19, I moved from Idaho to New Jersey for a year to be a live in nanny. For some reason when I was young I was obsessed with living in New York City. I'd never been anywhere NEAR New York City, but for some reason it seemed like the coolest place to live. I wanted to be a writer when I grew up (unless you count this blog, that never happened!), and for some reason I had the idea in my head that I needed to live in New York City if I was going to be a writer. I had that plan in my head from the time I was about 12.

So then when I was 19 I kind of hit a crossroads in my life. After I graduated from High School I went to a year of college and hated everything about it. Not that I necessarily hated college, I just wasn't taking any classes that interested me, I lived in a tiny apartment with five other girls, which really wasn't my thing, and the whole year I just kind of felt lost. You go through your whole first 18 years of life with everything planned out for you and then suddenly you find yourself out in the world by yourself, expected to figure it all out, and that year I hadn't really figured it out yet.

That's when I got the idea back in my head to move to New York City. I was young, free, and I knew that it was going to be my only chance to really take an adventure like that. So I found a family in New Jersey who lived less than a half hour outside of New York City who needed a nanny and I packed up and moved across the country for a year. 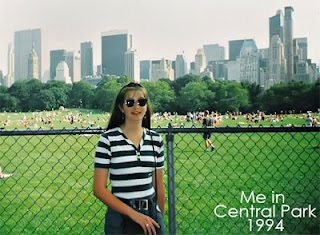 That was an amazing, crazy adventure of a year, that's for sure! I was the nanny to four absolutely gorgeous little girls. The lived in a beautiful town in a beautiful house and it was really kind of an interesting experience to live with someone elses family for a while. Living with a wealthy family outside of New York City is really different than growing up in a small town in Idaho. It was a culture adjustment at first, more than I thought it would be. It was good for me though and a chance to step outside of the little bubble I'd been living in. I'd barely been out of Idaho before then and suddenly I was getting to visit all sorts of great places. Suddenly I could just get on a bus and be in New York City in 20 minutes. On my days off I would go there and just wander the streets, taking it all in and just loving the fact that it was just me, on my own, doing what I'd always wanted to do. I absolutely loved New York City.

During that year I also took my own little excursions to Boston, Washington DC, Philadelphia, and I even got to go to Florida with their family, where I took a little day trip through the Everglades. Pretty exciting for a naive kid from Idaho who'd never been anywhere before!

That was a really tough year for me too though. It was really the year that I had to do some serious thinking about where my life was going to go, and a lot of things were changing. It was the year I found out that my dad was dying of cancer, it was the year that the boy I loved was out of the country and not exactly keeping in touch and it was the year that I realized that life doesn't always work out the way that you plan. I look back on that year at one of the best and one of the most difficult of my life.

But being a nanny was fun. I loved those girls, I loved the town I lived in, I loved the opportunities to travel and I loved the feeling of freedom. I was truly on my own that year, and I liked it. I learned a lot about the world that year.

Life changed when I left New Jersey. The boy came home and broke my heart, my dad died, I couldn't make up my mind about going back to college and things were in an upheaval for a while. Thank goodness that I met Shawn during that time. I actually met Shawn less than a month after I got home. I decided to get a job for a while while I figured out what to do next, and he was one of the very first people I met on my first day of work. Without him to lean on, the next year of my life would have been a lot harder.

I don't remember why I'm even telling that story. I think Facebook is making me nostalgic! I think my point was that the sweet little girl I nannied for, who I watched go off to her first day of Kindergarten, is now turning 20 and is going to college at Duke. She's the age that I was when I was her nanny. She could be MY nanny now.

Life goes by really fast. I'm glad that I took that year when I was young and free to travel, spend some time learning about life and opening my mind a little. As hard as that time in my life was, I look back on it and smile. I have good memories of those kids, and my adventures in New York City will always be in my heart. I haven't been back there in 15 years, but one of these days I'm going to go back again. I want to show Shawn and the kids all the places I loved.

So I'm a little obsessed with Facebook right now. I've loved catching up with old high school friends and others who I haven't seen or heard from in a long time. The people who were special to me 15 years ago are still special to me now and it's been fun getting to revisit some old memories. It turns out that I really am a Facebook kind of person after all.
Posted by Wendy at 8:28 AM

I am a FB addict too. I have come in contact with so many people I went to school with and grew up with. It is so neat!

What a fabulous story Wendy! I swear you and your family are always doing the most interesting things! I too am loving on the Facebook and I am not at all a MySpace kind of person and balked at my first few Facebook invitations LoL