So much to talk about today!

A few nights ago Matthew's voice started to sound kind of hoarse and raspy. He said he felt fine and he didn't have any other symptoms of being sick. That night we let the boys sleep in the basement together.

At about 4am Josh came into our room and woke us up, saying that Matthew sounded funny. Matthew came in to our room behind him, sounding like he could barely breathe, pretty much unable to talk with a barky cough. He sounded terrible! Shawn took one look at him and decided to talke him to the ER.

I tend to freak out when these things happen. Not in front of the kids of course, but I have a mental freakout. My anxiety kicks in. I'm always convinced that everyone has some horrible disease. I haven't always been this way, but I think I can pin it down to two reasons. First of all, my dad went in for normal gallbladder removal day surgery and when they removed it it was covered in cancer and he died the next year. They said if he hadn't had his gallbladder removed they wouldn't have known he had cancer until the very end. Now I'm conviced that I have some terrible disease lurking in my body that no one knows about, lol. I had to gave my gallbladder removed a couple of years ago. It wasn't pretty.

Second, I used to do volunteer work for the Leukemia and Lymphoma society after an internet friend of mine lost her baby to Leukemia. I'm proud of the work I did, but after a year or two of hearing story after story of children with cancer, you start to feel like everyone has cancer. I know more about childhood diseases that anyone really needs to know. I love to research things but that was one of those cases where ignorance is bliss. I wish I could unlearn some of the things I know.

So now when my kids have a headache I'm sure it's a tumor, when they get a bruise it's Leukemia, and when they come into my room at 4 in the morning unable to breathe, I don't know what it is, but it's got to be something bad. Shawn, fortunately, isn't nearly as neurotic as I am. He knows what's going on in my head when these things happen and he's always the voice of reason. That poor guy has to live with me every day. Can you imagine?!

So he packed Matthew up and took him to the hospital. The doctor took one look at him declared it croup. He said it was the third case he'd had that night. They gave Mattew a breathing treatment, some steroids, a popcicle and some stickers and sent him home. Matthew thought that eating popcicles at 4 in the morning was way cool, and any time someone gives him stickers he's made a friend for life, so it was all one big adventure for him!

So we've stayed home for the past few days and it's been pretty low key and boring around here. Thank goodness the kids have Christmas toys to keep them busy. Matthew seems to be feeling fine. His voice is still a little raspy, but otherwise he's doing much better. Life will continue. :)

So that brings me to topic #2! Since we've been home doing absolutely nothing for the past few days, I've had some time to start planning Clarisssa's bedroom. Yay!

The first thing I decided was that I'm not going to do a baby's room. We're not going to put a crib in there. One thing I learned recently is that babies in Korea don't sleep in cribs, they sleep on the floor. Long ago, before good home heating systems, Korean homes were heated with hot stones underneath the floors. Since that's where the heat was, they slept on mats on the floor because that was the best way to stay warm. Even now that there are modern heating options available, most Korean homes are still heated with heated floors, although they're not longer stones, now they're modern heated pipes or something, and it's still common to sleep on the floor. According to people I've talked to who have slept that way, it's much more comfortable than it sounds.

So while babies are with their foster parents, they usually sleep on the floor next to the foster mother. I love that, actually. It makes me happy to know that Clarissa is probably sleeping snuggled up next to her foster mother. But from what I've heard, a lot of Korean babies refuse to sleep in a crib when they come to their American homes. For bonding purposes it's better to sleep next to them for at least the first few months, and it almost seems mean to make them sleep in a little box by themselves after being used to sleeping in a more open space with their moms. So no crib. By the time Clarissa gets here she's going to be close to a year old anyway, and if she sleeps with us for a while the crib would be pointless. I don't want to put a baby's room together and then have to switch it to a bed later if the crib isn't even going to be used much.

So my solution is a trundle bed. I always wanted a trundle bed growing up! I figure that by the time we're ready to put Clarissa in her own room to sleep, she'll be old enough to sleep in the trundle part of the bed just fine. She'll be used to sleeping near the floor anyway. Then when we decide that we're comfortable with her sleeping on a regular bed, we'll just move her up to the top part of the bed.

Let me just say that I'm not a girly person at all! I've always been kind of a tomboy. When I was little I didn't play with dolls, I caught frogs and snakes in the canals by our house and made forts in the fields. I don't know anything about cute little girl things. I don't like pink ruffly things and I like really simple, clean decor. So it's been kind of hard for me to come up with a little girls room that is cute and girly, but still my style. I'm much better with boys rooms!

I knew that I was going to be decorating around this art print:

I can't even begin to tell you how crazy in love I am with that artists work. It's totally my style, the little girls look Asian and I knew that I just had to decorate around her art. She's the same woman that I had draw Clarissa's dress. She's incredible.

Anyway, to make a long story shorter (you know I don't tell short stories!), after consulting with my brilliant internet friends yesterday, we came up with this: 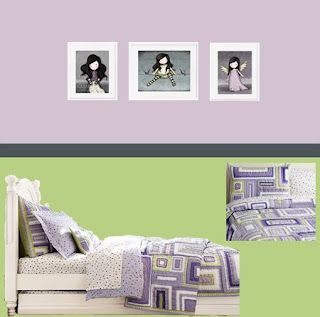 It's finally starting to feel real. I'm decorating an actual bedroom for an actual child. The closer we get to the finish line the more real it is to me and the more excited I get. Waiting through a nine month pregnancy to finally get to meet my babies was hard, but waiting twice that is torture! We're almost there!!!
Posted by Wendy at 9:27 AM

Wendy, Did you/do you follow Jenny and Allie? It never ceases to amaze me how many people she has touched! I'm a lot like you, I mentally freak out every time my kids are sick.

I love the bedroom theme you've chosen. It looks great.

It is adorable! Love it!

Hope Matthew is feeling better soon. My oldest had croup several times and it's so scary to hear that barking cough.

I'm so sorry to hear about Matthew's scary trip to the ER. You are as neurotic as I am, so I can most definitely feel your panic. Nothing is a simple ailment for me -- everything is catastrophic.

The bedroom is beautiful. I love the colors! It's going to be absolutely perfect for Clarissa.

OK - so now that I read one of your posts I want to read them ALL so here's the deal...maybe, by the time you are no longer #7 I will have read most of them...what's your e-mail address, I'll invite you to my blog - nothing as entertaining as yours BUT it is what it is...hugs, MIchele

I read your blog every now and again. I noticed you haven't wrote in awhile. Just thought I would come and check to see if things were okay.