I know that we're still months away from actually getting Clarissa home and even when she gets home it's going to be a while after that before she's sleeping in her room, but lately getting her room together has been my obsession!

I think because waiting for a referral and knowing that we have no control over when it's going to happen is such a helpless feeling it makes me feel better to be able to work on something that I can actually control. When you're pregnant you get to go to the doctor every month, hear the heartbeat, see an ultrasound and feel the baby kick. But when you're waiting for an adoption you have no physical reminders of your baby unless you create them.

So I know that I'm jumping the gun on the bedroom, but having a place to go that is actually a phyisical reminder that there is a baby coming makes me feel better. It makes it feel real.

So having said that, we're now one step closer to having Clarissa's room done!

I've had my eye on this bedroom furniture for a really long time. I've looked at a lot of other bedroom sets, but I can never find anything else that I love as much. We ordered the bed in January, but because we wanted a trundle under it, it was a special order so it took a month and a half to get here. They delivered it yesterday and I couldn't possibly love it more! I'm completely crazy about it!

In the meantime we have been looking at the dressers that match it. I've really been agonizing over this furniture purchase because I'm a huge bargain shopper and there's not really anything about this set that is a bargain! I'm the kind of person who loves to hang out in the clearance section of the furniture store. I decide whatI want and then I wait until it shows up on clearance and then I jump on it. We have great furniture in our house there are very few things that I didn't get some kind of great discount on!


But this bed was a special order and not something I could get a discount on no matter how I tried. (Believe me, I tried!!) So when we went to look at dressers on Saturday I was already feeling guilty enough over the bed purchase and the dressers were also really expensive. I really really wanted the dresser that matched the bed though, so we sucked it up and ordered it. It was due to be delivered today.

Then last night I was cruising Craigslist (one of my favorite bordom killers!) and lo and behold someone was selling the exact same dresser, with a mirror to match and a queen sized version of the bed we just bought (minus the trundle)!!! I won't go into all the numbers, but let's just say that it was the freakin' deal of a lifetime. The bed, the dresser and the mirror together were less than half the price of the dresser by itself at the furniture store. I obviously don't need the bed for Clarisssa's room, but we do need bedroom furniture for the guest room in our basement. We have a queen bed down there but it doesn't have a headboard or anything. We use that room so infrequently that I've never gotten around to buying one.

BUT, it's a solid wood dresser and it will probably cost me 10 bucks to match the paint and repaint the top of it. The whole dresser doesn't need painted, just the top of it. It will be a piece of cake and it will look good as new when I'm done. For that price it was totally worth it.

I'm on a total bargain shopping high today. There's nothing I love more than a really good Craigslist find! :)

So here are the photos of Clarissa's room! I still have some work to do in there, it needs decorations on the wall, some curtains and I haven't put the mirror up yet, but I'm really loving it so far. I could just sit in there for hours.

I wish I was able to get better photos of the room. It looks really small in the photos, but it's bigger in person. It's just hard to get a good picture of the whole room because of the way it's angled. Maybe I'll have Josh and Matthew give another tour of it with the video camera when I'm finished decorating! 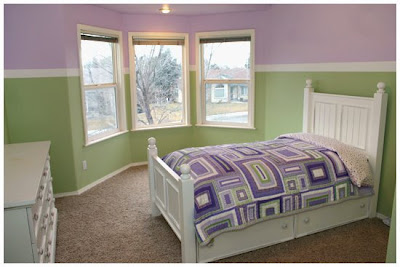 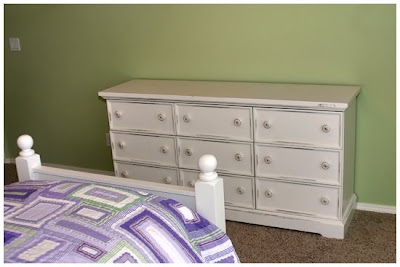 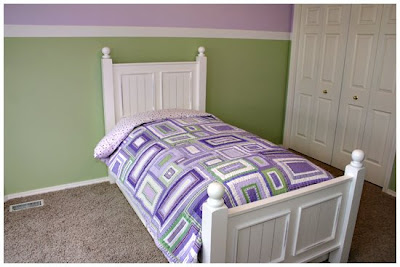 And here's a collage of the whole process so far! I'll update it again once I decorate!

Edited to add: It occurs to me that some people are probably wondering why we put a bed in there instead of a crib. I've explained it before, but in case you're just joining us, here's the explaination:

In Korea babies generally don't sleep in cribs, they sleep on the floor. That sounds horrible, but it's not, lol. In the old days before electric heating, Koreans used to heat their houses with hot stones underneath the house. Because the heat came from the floor, that's where they slept.
Now there is modern heating there but most Korean homes still have heated floors and it's still common to sleep on the floor. Most of the time babies waiting to be adopted sleep on the floor next to their foster mother.

By the time Clarissa gets here she's going to be about 10 months old. For the first few months at least they reccomend having her sleep with us so that she can bond. So by the time she actually needs to use her bedroom she's probably going to be over a year old and she will most likely never have used a crib. I know a lot of people who adopted from Korea who said that their baby absolutely hated being in a crib, so we're not even going to bother.

The bed that we bought is a trundle bed. The bottom part that looks like drawers is actually another bed. So I think when we do finally put her in her room we're just going to have her sleep on the trundle part at first while she gets used to sleeping in a bed by herself. Then when we feel comfortable that she's not going to fall out we'll move her up to the regular bed.

And there's the explaination for why there is no crib in her room. :)

It is gorgeous! The room look fabulous. Good job! That sweet girl will love her new room!

It looks beautiful Wendy. Maybe you could get a night stand to match at the furniture store?

Well, that didn't sound right! Lol. It really is a beautiful room. I love reading your blog and check daily for updates. Clarissa is a very lucky little girl.

They do have a super cute nightstand that matches the set! I think we'll probably buy it, but I'm hoping I'll get lucky and find it on Craigslist!! :)

The room looks FAB!! Love it!! Hope some movement starts to happen!

The room looks fantastic! I love that bed and I love that Craigslist deal even more! I'm forever bargain hunting on Kijiji here and know how good a deal feels on something like that - it was meant to be!

I had no idea that Korean's slept on the floor, that's so interesting, you guys are great it sounds like you really have it all together for Clarissa, she's such a lucky girl!

Looks good; I saw this site with some useful info on Discount Bedroom Furniture. Hope it helps...