Back from the train

We had such a fun day! After I wrote my blog post this morning I decided that we really needed to have a family adventure today, so I went searching for something fun to do.


There is a tiny little town about a half hour from Boise that has a train that does all sorts of fun little day trips. Through the year they have different themed trains. We've done the pumpkin liner in October where you take the train out to the pumpkin patch, we done the Polar Express train in December where you take the train out to Santas Workshop, and we've done a few little other excursions over the years.


I thought that might be a fun activity to celebrate the first really great weather of the year, so I checked their schedule and found out that they were doing a Wild West ride today. They have a theater company that comes and does a performance while you take the train ride. It's a 3 hour ride through the beautiful Idaho mountains and the audience becomes part of the show.


They had people dressed as people from the old West and they were taking the train to an area where they both had a claim for some gold and they both wanted to be the first ones to get to it. They went through the train cars and interacted with everyone on the train and there was a whole story line that was really cute. When we boarded the train they gave everyone fake money and during the ride we were all robbed after their tied up the sherriff. It was really fun.


The kids had a ball, the weather was absolutely beautiful and it was a really fun day. It's been a pretty rainy spring here, so we haven't really been able to enjoy very many sunny days yet this year. It's been mostly in the 60's and kind of cloudy lately. Today it was 80 degrees and sunny. I think everyone in town was outside today!


So we had a really great day on the train and now we're all home and ready for a movie night. I absolutely love Saturdays like this when we spend the whole day together doing something fun. I love my family and I love spending time with them.


Here's a picture of Josh and Matthew with two of the train robbers. Don't they look scary?! ;) 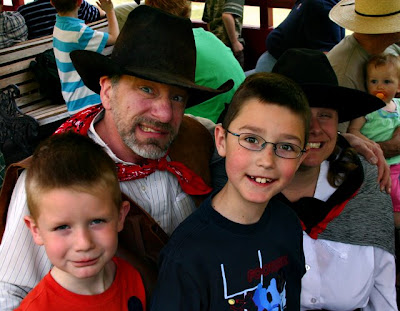 That sounds so fun!! Though at this point, dd would just constantly be saying, mama what happened, what happened and not stop! lol what is that man doing? Why did he take my money? lol I'm glad you all had such a great day!!