It's Friday again. I've developed a love/hate relationship with Friday these days. I'm always a little bummed when Friday comes along and I realize that another week has gone by with no referral. But on the other hand, that means we're one week closer, right?

Oh, and I wanted to clear up a misconception that I think some people have. Friday isn't the only day we can get a referral, it's just the day that the agency sends us an e-mail to let us know what has happened that week. We can get a referral any day of the week, it's just Fridays that they send out their mass e-mail to keep us up to date on what's new. It occured to me recently that I think some people were under the impression that referrals only happen on Friday, and I can see why that would be since Fridays have always been the day when I wait to hear if any referrals have come. I think I probably made it sound like all the referrals come on Friday. They don't, that's just when I hear about them. So a referral COULD come today, but it's no more likely than any other day of the week. I'll definitely update later today if there's anything exciting to report, but if there's nothing new I may not report on the Friday update right away.

Ok, so I didn't go back the the pet store to buy the kitten yesterday. I wanted to SO bad and I thought about it all day, but I managed to talk myself out of it. As much as I want another cat, this isn't the time for us to get another pet. The funny thing was that when I told Shawn I was thinking about getting another kitten I thought he would put his foot down and say absolutely not, but after I told him about it I think I totally could have talked him into it! He keeps saying that he doesn't want another pet because he doesn't like cleaning up after them (He's the litter box cleaner in this house), but we're all a bunch of softies around here when it comes to animals. I'm pretty sure that sooner or later another pet is going to make its way into our lives!

Someone commented yesterday that I should post photos of our two cats, so here are a few. I don't have any recent photos on my computer and I'm having camera issues at the moment, so I dug up a few old ones. 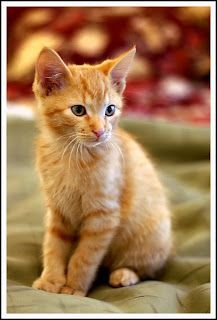 Here's Max as a kitten. If you look in my header at the top of this page, Max is actually in the picture with us. That's a newer picture of him, but it's one I cut out of a picture with other stuff in it, so it wasn't a good one to post.

Max is a sweet cat. For some reason he's decided that I'm his favorite person in the family and he follows me everywhere I go.

Max likes to go off into quiet corners to sleep during the day sometimes, like most cats do, and a few weeks ago I was looking for him one afternoon and couldn't find him anywhere. I looked in all his usual sleeping places and he was nowhere to be found.

Then I happened to walk past Matthews bedroom and peeked in and there was Max, sound asleep on Matthews bed. Which wouldn't be weird except that Matthew has a loft bed, which is basically the top half of a bunk bed and it's super high up! Way too high for Max to jump up there. I couldn't figure how in the world he got up there. When the kids got home from school I asked them if they had put him up there and they hadn't, so we decided to figure it out. Max wasn't on the bed anymore so the boys and I all climbed up onto Matthews bed and started calling for Max, who likes to be in the middle of whatever is going on. We were hoping that he would come up to sit by us and then we could see how he got there. Sure enough, a few minutes later Max came in to Matthews room, saw us on Matthews bed and climbed right up the ladder to get to us! He climbed the loft bed ladder like it was no big deal. I've never seen a cat do that before! That's been his preferred sleeping place ever since. 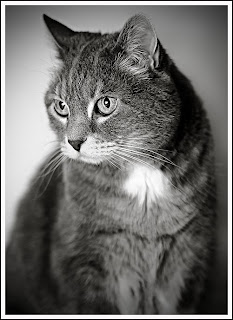 This is Daisy. Daisy was a stray barn kitten who go dropped off at a pet store and had never really gotten used to people. It took her a little bit to adapt to me and Shawn when we got her and twelve years later Shawn and I are the only two people she tolerates. She's sweet as pie to us. She snuggles with us and purrs loves to be petted, but she's not a fan of anyone else. She doesn't let other people pet her and when people come over she prefers to hide until they're gone. If people do get too close to her she's been known to hiss and growl. Cranky is probably a kind word for her temperment. :)

She tolerates the kids when she has to, she doesn't hiss or growl at them, but she's happy to be left alone. She spends most of her day sleeping in a corner somewhere.

She was so spunky when she was a kitten and she even used to play fetch with me and Shawn, but as she's gotten older she's lost that spunk. She has arthritis in her hips now, so running is a thing of the past and sleeping has become her favorite pasttime. She's getting old and I know that one of these days we're going to have to say goodbye to her, which will be hard. She's been a member of our family almost as long as we've BEEN a family.

And speaking of family, I have a couple of photos that I've been meaning to post for the past week or so. We had a photo shoot with my photography teacher a few weeks ago and here are a couple of the results. It occured to me as he was taking them that it's been a LOOONG time since we had anyone besides me take a family picture of us! I have a remote for my camera, so normally I just set us all up and do the photos myself, but that's a huge pain in the neck. It was so nice to let someone else do all the work! I'm happy with the results, but I can't wait to have more pictures taken later this year when our family is complete! 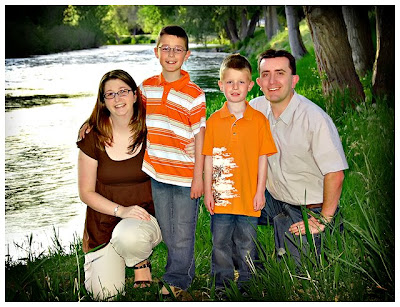 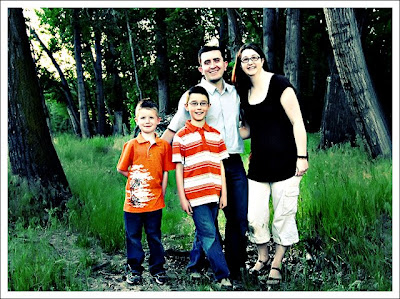 Love the photo by the water. You have such a great looking family. I love reading your blog and hearing about the adoption. I'm hoping that you get your referral very soon, and look forward to seeing your beautiful daughter.

Oh my! Our cats names are Max and Maisy!! : )
I love the pictures. Did you get the email I sent you through babycenter?

I'm so sorry, I didn't see the BBC message until now! I just read it and replied. Thank you SO MUCH!!! :)

I love the first family photo. It's terrific. Oh, and thanks for sharing pics of your cats. They are so sweet.

So when are we going to see some more of your latest photography?