I don't have a lot of time, but I thought I'd give a quick update about our fun day! This morning a tour guide picked us up at our hotel and took us on a siteseeing trip. We went to an absolutely AMAZING ancient palace. It was another one of those times on this trip that I've almost had to pinch myself to believe that I'm really here! I never thought I'd be touring a palace in Seoul, Korea!! The palace is over 600 years old and so beautiful. Seoul is such an interesting mixture of old and new. It's a very modern city with big skyscrapers and then right in the middle of them there will be a palace that is hundreds of years old. It's amazing to see.

After we visited the palace we went to lunch with our tour guide and had the best Korean food EVER, and then went shopping in Insadong, which is a really cool part of the city full of all sorts of neat traditional Korean shops. It's an awesome place to buy souvineers! We picked up a few things for the kids and we'll be going back there in a few days because it's right down the street from the hotel we're switching to on Monday.

Here's a photo of Shawn and I at the palace having a great time! 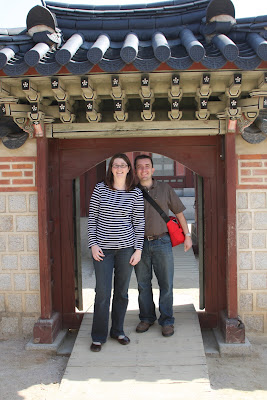