Happy 2010! I can see that we're in for a very busy but extremely fun start to the new year! We are having an absolute ball with Melissa. I am so grateful for this awesome opportunity, it's really working out well and the whole family adores Melissa. Josh and Matthew are loving it because we've been doing a lot more activities than we would normally do in an average week. It's just been one big party around here the past few days!

Last night we let the kids have a campout in the basement, which they always love to do. They ate pizza and had a Wii tournament and watched movies until they finally passed out. They tried to make it to midnight, but they didn't suceeed. :)

This morning we went outside and played in the snow, but it had rained a little this morning so it was kind of slushy out there. It was perfect snowman snow though, so Josh and Melissa made the cutest snowman ever. Melissa did the face and I absolutely love it. Here's a photo that I'm including since you can see her face. 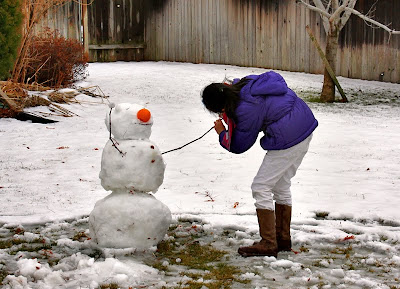 After we played in the snow we packed the kids up and went over to a big arcade they have in Boise. It has lasertag and a roller coaster simulator and a restaurant and all sorts of fun things to do. We ate lunch and let the kids play for a while and they had a ball. We bought a bunch of tokens for the kids to play the arcade games and when we were just about out of them I gave Josh and Melissa the last couple that I had in my pocket. Melissa took the last token and went over to a game that looks kind of like the wheel on the Price is Right and she put the token in and spinned it...and won ONE THOUSAND tickets! You should have seen the look on her face, it was awesome! Everyone standing near her watched her collecting the tickets that came out of the machine. It took forever for it to stop spitting out tickets!!

She took her tickets and picked out some fun prizes and she was really proud of herself. I think she'll be telling that story a lot when she gets back to Korea. :)

We came home and the kids have been happily playing together all evening. They all play together really well and it's been fun to watch. I felt really bad for her when she first got here because there isn't a girl here for her to play with, but she gets along great with the boys. I hope they continue to get along as well as they have the past few days!

Tomorrow we're going to find something else exciting to do and then Sunday I think we'll be more than ready for a day of rest. Monday school starts back up so that will be taking up most of their days for a while. I'm a little relieved by that because as much fun as the past few days have been, I'm pretty sure that I couldn't keep it up all month! We're eventually going to run out of exciting things to do! :)

So that's what's going on around here these days! It's always an adventure at our house! :)

Sounds like you guys are having so much fun with Melissa! I hope her first day at school went well.