We had a pretty busy weekend! It was a good time, I'm glad that we did it. I worried about it being too crazy with four kids in a hotel room, but it wasn't. Well, it was a LITTLE crazy, but still survivable. :)

Here are some photos we took: 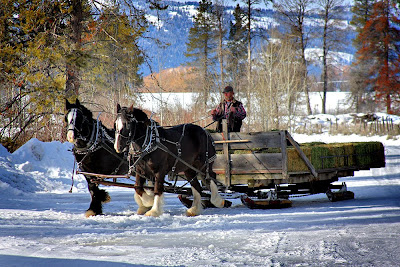 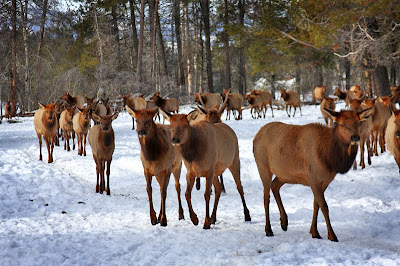 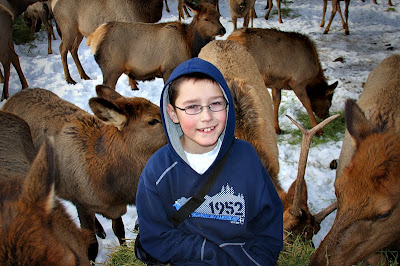 Saturday we took the kids skiing. Growing up in Idaho I've been surrounded by skiers and skiing my whole life, but somehow I've never actually been skiing myself. I remember on Monday mornings in high school you could always tell who had been skiing that weekend because of the goggle shaped sunburns on their faces (or occasionally by a cast and crutches...). Anyway, Shawn and I both commented this weekend that it was weird that we've never been skiing. It was time for us to go check out a ski resort.

The one we went to was in a cute little town called McCall. We've been to McCall in the summer but never in the winter. In the summer there's not a lot going on there, except that there's a beautiful lake there where people go to do some boating, but in the winter the place is packed with skiiers! It was fun to get to see it when it's so busy.

McCall is two hours away from Boise and when we left Boise on Friday there was absolutely no snow on the ground at all and the sun was out, but it was fun to take the drive into the mountains and watch as there was a little snow, and then a little more, and then a little more...and by the time we got to McCall we were looking at FEET of snow on the ground! I haven't seen that much snow in a long time!

We made the winding drive up the mountain to the ski resort and got the kids checked into ski school. They have an awesome program there for kids, I was really impressed with it. We signed them up for a half day class and they had a really great time! It was fun to see them all bundled up in their ski gear. I took a zillion pictures, of course! Here are a few, including a couple with Melissa in them, which I decided I'm OK posting since her ski goggles cover up part of her face. I just always feel weird posting photos of other peoples kids on my blog, since some people aren't comfortable with it. 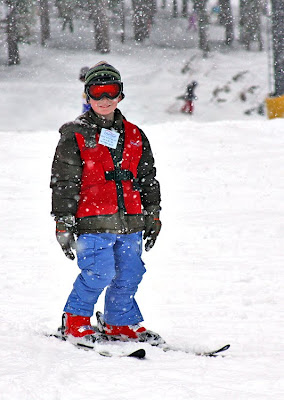 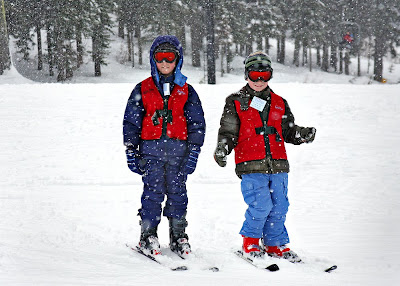 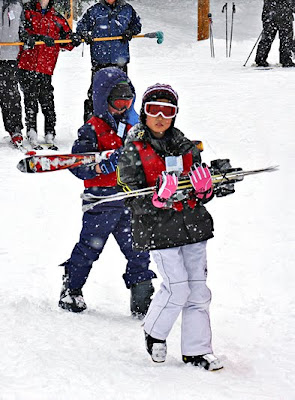 As you can see, it was snowing like crazy! While the kids were skiing we were planning to go back into McCall and wander around the shops for a while, but once we got up there and it was snowing so much we decided that we didn't want to make the trek down the mountain and back up again so we just hung out at the ski lodge with Clarissa for a while. It was fun to sit and watch people skiing out the window. I've never been that interested in learning to ski, but after watching it for a while I think I might have changed my mind! It looks like so much fun! The boys really enjoyed learning to ski, so I think we may just have to give skiing another try one of these days.

The kids got done with their ski class at 1:00 and we made the drive back down the mountain and back to our hotel. We thought the kids would be exhausted, but they weren't so we took them swimming at the hotel pool for a while, which they enjoyed.

Yesterday morning we got our stuff packed up, said goodbye to the snow and drove back to Boise. All in all it was a really fun trip! I was kind of worn out by the end of it, but the kids really had a great time and that was our goal, so I'd say it was a sucess!

Today the kids were out of school for the holiday so we took the kids to the movies. We found a really cool theater in a town near here! It's a theater/restaurant. They have a whole restaurant menu and you order your food when you pay for your movie tickets and then you go into the theater where they've taken out every other row of seats and added tables. So you sit in a theater seat with a table in front of you and when the movie starts they bring your food to your table, so you can eat your meal while you watch the movie. It was actually really fun and different and the movie tickets were only $3, so it was actually cheaper for us to buy movie tickets and lunch there than it is for us to buy movie tickets and popcorn at the fancy theater. We're definitely going to do that again sometime! We saw Planet 51, which was pretty cute.

Tomorrow the kids go back to school and I'm looking forward to a little peace and quiet again! We've spoiled the crap out of the kids this month since Melissa has been here. I think they're going to be sorely dissapointed next month when Melissa goes home and we're not running off on vacations and to movies and arcades every five minutes! This is definitely not normal for us.

It's fun for now though and we've enjoyed having Melissa here. Wednesday is her birthday and we're planning a little party for her. She asked me if I would make her a birthday cake (which I had planned on anyway) and then she asked if she could help me make it, so I think tomorrow night we'll be making a birthday cake. Fun! For her birthday I bought her the game Sorry, which she has loved playing here and the book "Charlie and the Chocolate Factory" because she's asked to watch that movie a million times since she's been here. Hopefully those will be fun reminders of her trip to America that she can enjoy when she goes back to Korea.

So that's pretty much all the news from our house! It's bedtime now and I'm looking forward to getting everyone in bed and enjoying a quiet house for a while. I'm tired!! :)
Posted by Wendy at 6:47 PM

WOW, it looks like you guys are having so much fun!!! I wish we lived close to something like that.

Melissa looks totally adorable! What a nice experience! You kind of get a glimpse what life will be like when Clarissa is older,how neat is that!
Tell Melissa we hope she has a Wonderful birthday tomorrow!

Melissa and I have the same birthday. I am sure she will have a happy one spending it with the Whites! It's been fun keeping up with your adventures.

Miss you on the BHB!