Yesterday Josh and Matthew had their first trial taekwondo class! I think I mentioned before that I met the owner at the Korean market a month or so ago and we signed up for a two week trial to see if they like it.

It's a new studio run by a husband and wife from Korea, who I get the feeling haven't been in the country a super long time. The wife mentioned that she's still working on her English, although I thought it was really good! She's SO nice and everytime I have seen her or talked to her she makes a fuss over Clarissa. She's really sweet.

The place is really nice, I was impressed by it. I loved being there because there is so much Korea there! :) There's a big Korean flag on the wall and some Korean masks and other decor on the walls as well. The kids got their uniforms on and the teacher wrote their names on them in Korean, which the kids thought was really cool!

I was really impressed with the class. The instructor is a really nice guy and I could tell that he knew what he was doing. He was good with the kids, but also very stern, which I think is appropriate for what he's teaching. Plus I liked his heavy Korean accent. :)

I don't have a lot of experience with martial arts, but I liked what I saw there. I think it's something that would be really beneficial for my kids. They talked about focus and concentration and respect and I can see that there is the potential to learn a lot of things besides the obvious self defense training. Plus part of the training involves learning some Korean phrases, which obviously I'm excited about! The more Korean culture I can expose my kids to, the better.

The kids really had a good time. We still have a few more trial classes, but I'm pretty sure we're going to sign them up. It's time consuming, three nights a week, but I think it would be good for the boys. They're really looking forward to going back.

Here are a few photos I took of them. They look so grown up in their uniforms! 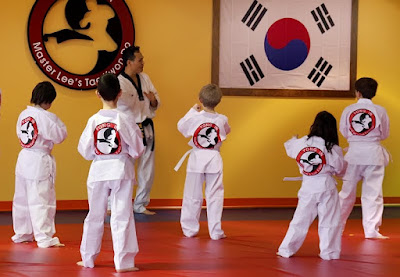 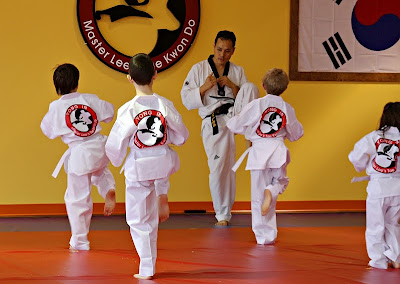 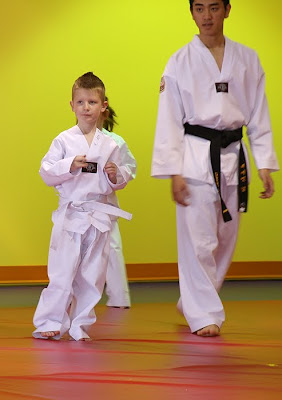 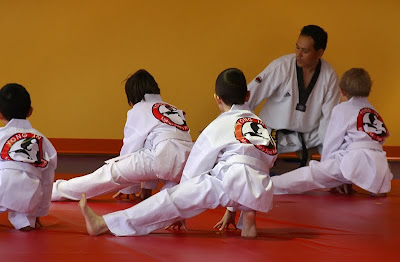 We signed Luke up and he started in January. He LOVES it! I think it's a great sport and a great way to incorporate Korea into our house.

Im Glad you could sign me up for Tae Kwon Do! It has been a great experience for em to learn how to defend from bullys. I love you and I love to read your blog!