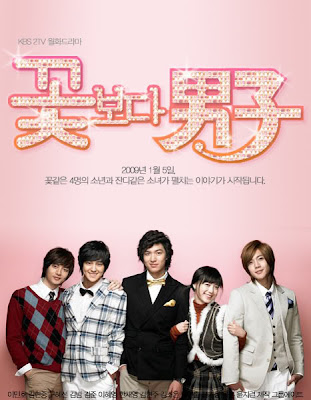 I love Korean dramas. Seriously LOVE them. When we were in Korea we bought some of our favorites on DVD and I love to watch them over and over.

For those of you who weren't here for my previous posts about Korean dramas, they're kind of a cross between a soap opera (only not trashy and cheesy like American soap operas) and a mini series. They have hour long episodes that all revolve around one plot and once they resolve the story, it's over. They're kind of like American TV dramas but they only go for one season.

Koreans know how to tell a story and keep you on the edge of your seat until it's over! American movie and TV writers need to go to Korea and spend some time learning from the masters.

I have been hearing about Boys Over Flowers for a while, but had never gotten around to watching it until this week. It was a gigantic hit in Korea last year. It has 25 hour long episodes and I've pretty much spent the past several days trying to cram episodes in wherever I can. Shawn and I have been staying up super late every night watching as much as we can until our eyes won't stay open anymore! Last night we finally watched the finale and it was really good.

Pretty much every Korean drama I've seen has the same basic plot line-Cinderella story with a love triangle. The sweet girl from the wrong side of the tracks meets a rich, handsome guy and complications ensue. You'd think that the same story would get old after a while, but somehow they manage to retell it a hundred different ways and it never gets old.

Boys Over Flowers follows that same story line. A girl from a poor family gets a scholarship to the most prestigious, fancy high school in the city and meets four very rich and powerful boys who pretty much run the school. At first they hate her and then they love her, and well...it just gets complicated after that.

It's sweet and sad and funny and completely addictive. I'm tempted to start over and watch it again!

Anyway, today I was looking on Youtube for videos related to the show and I realized something. When we were in Korea we took the train to the city Clarissa was born in and the day we were there it happened to be the day they were having an international film festival in that city, which I gather is sort of like Sundance or something. All the big movie stars in Korea were there.

Today I did a search on Youtube and came across a video of the main male star of Boys Over Flowers (who has officially replaced Jim Halpert as my new TV boyfriend by the way, lol) and he was there walking the red carpet that night! He was literally across the street from us! It would have been really fun to watch all the excitement that night if we had known who we were looking at.

So anyway, watch Boys Over Flowers. I love Korean culture.

In other news, we were supposed to go out of town to my moms house this weekend for Easter and my birthday, but I'm sick so I don't think we're going. In an effort to stop complaining so much on my blog I've tried not to whine about the fact that I've been sick all month, but I've been sick all month. Our whole family has been sick all month. We just keep passing it around and when someone gets over it someone else gets it and we start all over again. I was feeling OK for a while while everyone else was sick, but now they're all better and I feel crappy again. I can't stop coughing. It seems like everyone I know around here has had the same sickness all month.

So we may just be staying home and taking it easy this weekend, which is kind of OK with me. I enjoy going to my moms house, but right now a quiet weekend at home is sounding kind of nice to me. We can find something fun to do at home.

I'm oddly not all that excited about my birthday this year. Normally I get excited about my birthday, but for some reason this year I'm mopey about it. I'm turning 35. I don't feel 35. Wasn't I just 17 yesterday?? I thought you weren't supposed to start getting mopey about your birthday until you turned 40. I've been having a bout of nostalgia this week. Maybe it didn't help that I've been watching a show about high school all week, lol.

So that's the update from our house. Aside from the annoying cough I have and the even more annoying bout of grumpiness about my birthday, life is going fine around here. Oh, and I'm still on Duck Watch 2010, but nothing yet. I'll keep you posted!
Posted by Wendy at 1:18 PM

I'm gonna fight you for rights to that actor. I love him. :)

I finished watching it today and was not disappointed! I want to go live in Korea and be saved by Gu Jun Pyo!

I found your blog on the Holt BB and I, too, wrote a blog post about Boys Over Flowers! I've been trying to get everyone I know to watch it but they all think I'm weird. So I decided that I'm going to have my book club watch it since reading the sub-titles is kinda like reading a book - LOL.

I LOVE Jun Pyo, but have you watched Shining Inheritance? If not, it's FABULOUS - super great story line, but the boys aren't as cute as F4!!! ;)

Hiii!!!, omg omg omg, I am the BIGGEST BOYS BEFORE FLOWERS and Lee MIN HO fan. I live in USA, and i am so happy to see one of us into Boys before flowers and Korean dramas. You have no idea, how much I have been trying to promote these dramas especially Boys before Flowers among my friends in college, and my family.I know i am late to your blog, and I am really happy to see someone as crazy if not a little less than me..about BOF...:)