We just got back from court and Clarissa is now officially ours forever. Happy day!!
It's been a whirlwind of a day, I think we're all pretty worn out! First of all, Clarissa has been sick for the past couple of days so she really wasn't in the mood to put on a pretty dress and go to court. She's had a fever and a cough for a couple of days and I've been so worried about how she was going to do in court.
We got some medicine in her though and we made it through. We all got dressed up in our red, white and blue outfits and headed to the court house. When we got there we found out that there was a delay in the case before ours so we had to wait for a while. Clarissa really wasn't in a very good mood and the wait didn't help.
But finally it was our turn and we got to go into the courtroom. Let me just say that I've always been kind of fascinated by law and courthouses and courtooms and lawyers and judges and the whole thing, so going to court is kind of fun for me. There's something about being in a courtroom. It's so...official, lol.
We sat down at a table and our lawyer introduced us to the judge and then we started the proceedings. Our adoption agency is located in another state and there's supposed to be a representitive from the agency at the hearing so they did it by phone. They got someone from the agency on speaker phone and they asked her a bunch of questions, like where Clarissa came from and how we came to be involved and some questions about guardianship and all off that. The woman on the phone answered the questions and then her part was over.
Then they moved on to me and the lawyer asked me a bunch of questions, like my name, my birthdate, etc, and then asked questions like if I agreed to be financially responsible for Clarissa, if I loved her, what I wanted her American name to be, etc., and then she asked the same questions to Shawn.
After that there was some legal talk between the lawyer and the judge for a couple of minutes and then the judge said that she was granting the adoption and it was over! The whole thing took about 15-2o minutes.
At the end I asked if we could take a photo with the judge. I had big plans of getting lots of great photos of our special day, but when it came down to it Clarissa just wasn't in the mood. We tried a few before the hearing started but Clarissa was cranky and trying to get her to sit still and smile was kind of a lost cause. We did get a nice one of us with the judge though, and I'm happy about that. That will be a photo that we'll be looking at a lot in the years to come.
Oh! And speaking of photos, I can finally post photos on my blog!! WOOHOO! When we got our referral last year we had to sign an agreement that we wouldn't post photos of her publically until the adoption was finalized and it's been driving me crazy! Over the next week or so I'm going to be posting lots of pictures, just because I can! :)
It's a really great feeling today, knowing that Clarissa is finally legally ours. No one can ever take her away or change their mind. It's quite a load off my shoulders!
But it's made me think a lot today about her birth mother and her foster mother and the circumstances that led us here. This adoption has always been a mix of emotions for me. I feel like with everything we gain, Clarissa loses something. Today she officially lost her Korean name and she loses her Korean citizenship. Part of me feels guilty every time we celebrate an adoption milestone like this one because our happiness comes out of so much loss. What we're taking away we're replacing with love and a happy family and I know that, but still...I thought about it a lot this morning.
So before court I put the necklace on Clarissa that her foster mother gave her and I had Shawn and the boys each put a shell in their pocket that we picked up on the beach the day we visited Clarissa's hometown in Korea. I wanted to go to court with a piece of the foster mother who loves her so much and a piece of her hometown. Today marks a new start for Clarissa and I'm so excited to see what the future holds for her, but I never want to forget where she came from. I have so much love and respect for the beautiful country she came from and for all the loving people there who were part of her story.
Clarissa is lucky to have so much love in her life and we're so lucky to have her in our family. Today marks the end of our adoption journey but the exciting beginning of life as a complete family. There is peace in my heart today and I'm excited to see what tomorow holds. 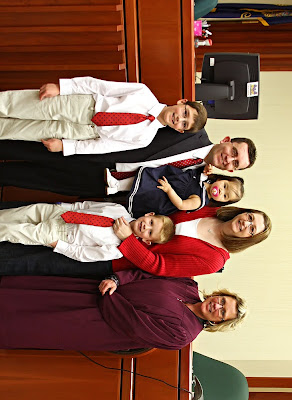 Congratulations! You're family looks beautiful. I have followed your journey since you had a siigy on bbc about wanting to adopt for Korea. I am very happy for you!

Thank you for sharing this with us Wendy. I've been reading your blog for a long time and I am so happy that Clarissa is yours now and forever.

Congratulations. Your family is beautiful! So glad everything went well and Clarissa is your daughter now forever.

Sooo happy for you guys, Wendy! It's amazing how fast the past 6 mos have flown by! Congrats on your beautiful daughter finally being 'yours'!!

Congrats!!! I am so happy for your family. Clarissa is very blessed to have you.

Congratulations. I am so happy for you all that Clarissa is yours forever. :)

Congratulations! So happy for you guys!

What a wonderful day! I'm so excited for you! :) It's been so fun to share in this journey with you.

I cried when I saw the title!! WOOHOO Isnt it awesome!! Such a good feeling to know its all over.. or just starting! CONGRATS!!

I've been stalking your blog all day waiting to hear the news. I'm so happy for you all.

Congratulations! Your journey has been amazing. I can't wait to see what the future brings to your beautiful family.


I'm sure her birth mother and her foster mother have been thinking a lot about her today as well. I love that you brought pieces of her past with her as she welcomed her future.

Congratulations! She is so adorable! I love the picture with the judge too. I am crying reading this post, so happy for you guys, this has been a long process!!!

I thought about you so much yesterday so I thought I would check this morning to see if you posted anything. I immediatly started crying when I saw the title. YEAH!!! CONGRATULATIONS!!! I am so excited and Happy for all of you. The family picture is Beautiful!
Clarissa is FOREVER YOURS!!!! YEAH!!!!

Congrats! I have followed your journey from the beginning and so excited to see the end result. Congrats Clarissa you couldnt have gotten a better family!

Congratulations to your entire family! Such great news!

Hooray! That's a great picture of your family and the judge. Clarissa may not have wanted to take very many pictures, but that's the most important one! I'm so glad you can post pictures of her now. She's so darn cute!

Congratulations on your forever family!

I've been praying for your family and am delighted with the news in this post! Congratulations!!!!!!

I've been following you for awhile and am so excited to hear that the adoption is finally final!! Congratulations!!! We just found out a few days ago that our little girl is coming home to us from Korea on June 4th. So many things to be thankful for!!

This is so awesome!! I've been following you and your journey since the days of old school babycenter bargain board and when your cat climbed the christmas tree ha! I'm so glad to see that everything has worked out for your family :)

Congratulations! I'm seeing this a bit late as we're on vacation, but so glad to see the adoption is finally FINAL!! Yay :) Such a beautiful little girl!

Don't forget to move the ribbon off of her face..or maybe you are going to change the top picture anyway! :)