I bought Clarissa a purse today. She's so funny, she's always been fascinated by purses and bags. Anything with a handle becomes a purse to her and it makes me laugh. So today I was at Walmart (I can hear my friends gasping in shock right now, because they all know how much I hate Walmart) and I found a little purse for five dollars and I decided that Clarissa needed to have it.

I brought it home and gave it to her and she's been carrying it around all day. She put some toys in it, including her fake cellphone, which cracked me up. She carries the purse in the crook of her elbow like such a girly girl. It's been amusing me all afternoon.

Nature has won over nurture in this case because she definitely didn't get her love of purses from me! I hate purses, I don't even own a purse. Actually, that's a lie, I own at least three of them. Every now and then I buy one and try to talk myself into carrying it but it never lasts. It ends up sitting in a closet next to the other purses I tried to talk myself into carrying.

I have a thing about being unencumbered when I'm out. I don't like to hold on to things. I don't even wear a coat in the winter because I know I'm going to have to hold it when I get into the building and holding onto a coat while I'm shopping or whatever drives me crazy.

But I'm seriously getting a kick out of the fact that Clarissa loves purses. She looks so cute carrying it around the house like she's got really important things in it. She's a funny kid, she makes me laugh every day. In between carrying her purse today she was sitting on the floor playing with one of her favorite toys that plays the ABC song. She loves the ABC song and today I noticed that she was trying to sing along, but she's still too little to sing along and she doesn't know the ABC's, so she pretty much just kept singing "D, D, D, D, D," over and over, which was SO cute. Every time the song ended she would start it over and go back to singing the letter D along with the song. Silly kid. :)

Right now she's taking a much needed nap and I'm enjoying some quiet time before the kids come home from school. I want it to hurry up and be dinner time because I made a new chicken marinade today and I'm dying to grill the chicken tonight so I can try it. Not that I'm hungry, I'm sitting here eating frosted graham crackers. Is there anything better than graham crackers and chocolate frosting? Ok, there probably is, but frosted graham crackers are pretty yummy.

Well, that's pretty much all I have to talk about today so now I will leave you with two pictures of Clarissa and her purse. Enjoy. :) 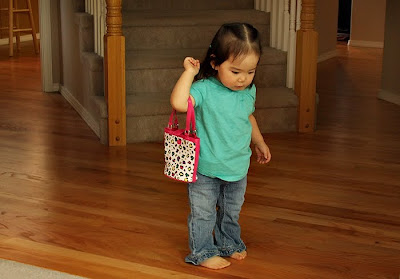 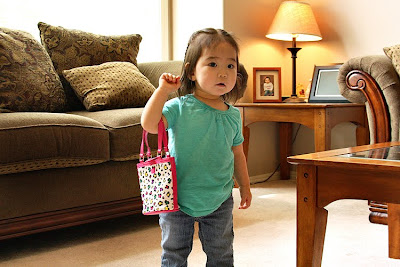 Adorable!!! Love the pics! DD was like that with purses, too! And I HATE to carry them, too. I go thru phases where all I need is a little wallet I can shove into my pocket..Then I decide I need to carry more around, and I always end up back to the wallet shoved in my pocket! Oh and the coat! I hate the coats. What's the point. I can't drive with it on. So I get in the car and take it off..get out of the car, put it on, walk a few feet into wherever and take it off again, just to carry it around. What a waste!!! lol Everyone around here things I'm nuts though...Where's your coat? In the car! At home! Wherever! lol

Soooo cute! That totally looks like a Clarissa purse! I can relate with how you feel about purses. I only carry a small wristlet out of necessity (cell phone, license and credit card).

Can she get any cuter?!? She is so totally precious! When my girls were little they loved purses too. They had so many of them. Just something they loved to collect lol