The many faces of us!

OK, I said earlier that I would talk about the big photo project I was working on when I was finished! I'm finished!

To make a long story short, I won a gift certificate for a ginormous photo display thingy at a webinar for professional photographers. It's actually supposed to be a big advertisement display thing for my photography business, but since I'm sort of on hiatus from the photography business, I have nothing to advertise and nowhere to advertise it so I'm modifying it a bit and it's going to become a mural on the wall in the newly redone playroom. It's ridiculously huge, 72 inches by 53 inches. It's kind of like a big poster but made out of heavy fabric, I think. Honestly, I'm not even sure exactly what it is. All I know is that it's free and I'll take it. :)

I have a big blank wall in the playroom that I wanted to do something fun with. I started out wanting to put a few cute canvases of the kids on the wall, but that didn't seem any different than what I have on the walls in the rest of my house. Then I thought I'd frame some silly candids of the kids and put those down there. That sounded better, but still not super exciting.

Then I won the big display thing and I decided to use it to do a big mural of silly family photos. Over time the idea kept getting sillier and sillier in my head, lol. I decided that I wanted to do something so silly down there that every time the kids went into the playroom it would make them laugh. Who doesn't want a playroom that makes them laugh just by walking in the door, right?! :)

So this afternoon we had a really silly photo shoot, faces were made, giggles were had by all and we came up with quite a silly creation.

Are you ready for this?!:) This is what will be hanging on our playroom wall in the basement as soon as they finish making it! :) Full size it's thirty 8x10's! 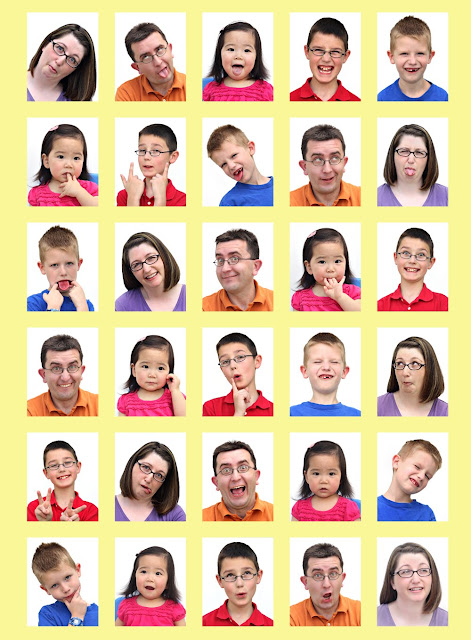 What a great idea!

That is a great idea and it turned out terrific! Love Shawn's face in the fourth row! ha ha

Love the idea and it turned out excellent!

Too cute! Your younger son and husband have some especially good "silly" faces! :)