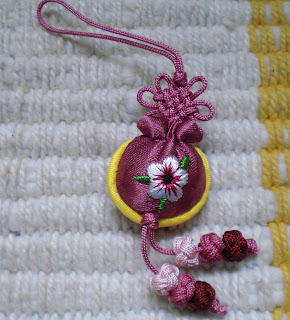 Last weekend when we went to the Korean cultural event I learned a little about Korean knotting. I made a knotted bracelet and I was completely fascinated by it.

The art of Korean knotting is called maedeup. It's an ancient art that you can still find all over the place in Korea. I have a bunch of Korean souvineers that have really cool knots on them, including the kids hanboks. I've been fascinated by the beautiful knots ever since I first saw them but they look really complicated. The picture on the left is a good example of something decorated with Korean knots. (It's not mine, by the way. I found it on the internet as an example.) I've seen them on clothing, jewelry, keychains, hair clips, zipper pulls, etc. I love them! There are all different kinds of amazing knots you can do and lots of really pretty things you can do with them.

Anyway, at the Korean event they taught us how to do the very most basic knot and even that one was tricky at first, but it was so fun that now I'm totally hooked! So yesterday I went and bought a book with instructions on how to do several really cool knots and today I've been driving around town trying to find the right supplies. The cord they suggested is ridiculously difficult to find around here, unfortunately. I've examined every type of string in town in the past 24 hours. I've been to bead stores, craft stores, jewelry stores...no luck. I finally found some stuff that will work for practice and then I found a website where I can order exactly what I need to make jewelry, but I'm going to have to wait for those supplies to arrive.

So today I'm up to my elbows in string and I'm teaching myself the art of Korean maedeup. It's super tricky and I don't follow written directions very well (Shawn laughed that I'm even attempting to read directions, because I don't read the directions for anything) but I'm slowly figuring it out. The book I got has instructions for several gorgeous knots, including a very complicated series of knots that turns into a dragonfly, which I'm truely fascinated by. We'll see if I can actually produce anything that even slightly resembles a dragonfly. :)

If I should happen to sucessfully create anything I'll be sure to take a picture and post it on my blog. If all I end up with is a pile of tangled string and a few tears, we shall never speak of this again. :)
Posted by Wendy at 4:38 PM

You should look for a tutorial on you tube or the like. You may be able to find one that shows you how.

I can't wait to see what you are able to create.

I spent two years living in South Korea learning maedeup. I wrote a book called "Elegant Knotted Jewelry" which introduces 10 knots and 30 projects. Also, if you want real Korean cording, I have a company here in the States who are carrying Korean cording from the same maedeup shop I purchase my supplies: http://www.satincord.com/a_cord_korean.html

It's addictive! I love it!

Becky, I'm so happy you posted on my blog! It was your book that I wanted to buy yesterday! I researched maedeup books on Amazon and yours got great reviews and it looked like it was just what I wanted. I checked Borders online and they said they had it at our store but when I got there they didn't have it so I bought another book instead. The other book is fine but I still really want yours! I think I'm going to have to order it from Amazon.

I'm just thrilled to hear from you because I was talking about your book all day yesterday and satincord.com is actually the website I was looking at today! After looking all over town for the cord with the cotton core with no luck I was thrilled to find a great selection of it on that website. I have an order ready to place!

I'm in awe of your work, maedeup is not an easy skill to master! :) Thank you for commenting!

One more question, do you think I should order 1.5mm or 2mm cord?

HOW MUCH FUN! Vin's uncle is an expert knotter ;) Not sure if it is Korean but he does really fancy things :) I can't wait to see what you make! I am fascinated by everything that you do!!!