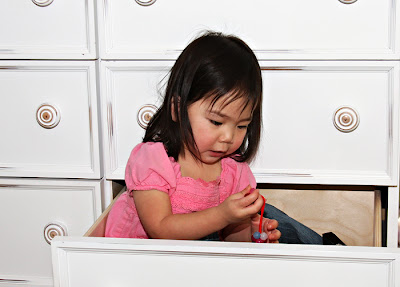 Today I went to get Clarissa up from her nap and when I opened the door I found her sitting in one of her dresser drawers. She had opened the drawer and stood in it to reach a jewelry box sitting on her dresser and was sitting in the drawer sifting through the treasures she found in the box.


We bought her the pretty little box in Korea. I bought it so that she would have a special place to keep adoption related treasures. I will eventually give her the letter from her birth mother, the sea shells we collected from the town she was born in, etc., and she can keep them safe in the box and get them out when she wants to look at them.
At the moment the only thing in the box is some cute hair accessories that her birth mother sent her last year. In case you weren't around for that post, about a month after Clarissa's first birthday last year we got a package in the mail from our agency in Korea. In it was a letter from Clarissa's birth mother, one from her birth mothers sister and a pile of clothes, shoes and other fun things for Clarissa. It's extremely rare to ever hear from Korean birth mothers, so getting that package was really special. Over the past year I've dressed Clarissa in the clothes her birth mother sent, but there are some cute ponytail holders she sent that are too big for her hair so I've saved them in the box on her dresser so that I can give them to her later. I'm kind of glad that they're too big for now because they will be something she can wear when she's old enough to understand who gave them to her.
So that brings us to today. I went in to Clarissa's room and found her sitting in a drawer with her special box from Korea closely examining the ponytail holders. It was a sweet moment and I was lucky enough to have my camera handy to snap a few quick pictures.

She didn't understand what a treasure she was holding in her hands, but I did and I decided to give her a few more minutes to play with them before I put them back in the box, so I sat on her bed for a few minutes and watched her play. And while I sat there I thought of her birth mother.


Clarisssa turns two this Friday. I think that her birthday is always going to be a little bittersweet for me. I'm excited to celebrate the special day with our sweet Clarissa but it's hard not to think of her birth mother and what she's missing. I'm sure she's thinking about Clarissa this week. The hardest part of the adoption for me has always been that our happiness came from someone elses pain. I'm sad for her birth mother. I know that Clarissa was loved and that placing her for adoption was hard on her. As Clarissa's birthday gets closer I think about her birth mother more and more. I'm grateful to her for the sacrifice she made and I'm sad for her that she's far away and not able to celebrate Clarissa's birthday with her. She's missing out on an amazing little girl.
Clarissa eventually got distracted by something outside the drawer and and went off to play. I put the ponytail holders back in their special box and put the box in a safer spot so that the treasures in it won't get lost.
So today I'm grateful for treasures from Korea. The little ones I keep in a beautiful box and the big one who is about to turn two and gets sweeter and cuter every day. 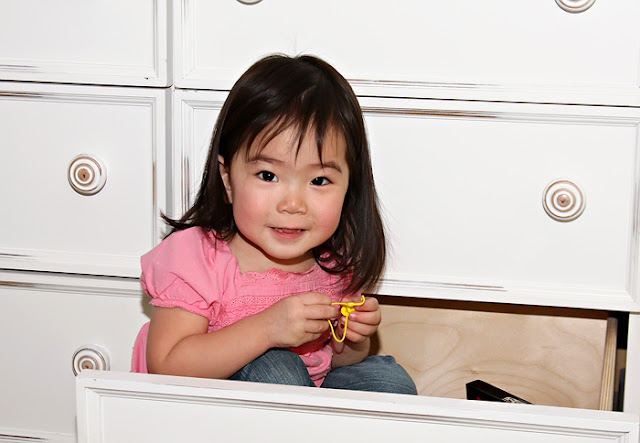 Clarissa is so incredibly cute. Seriously.

That is sooooo sweet! She is adorable!

Oh my goodness that is so sweet.. and I love the story. I have sweet little momentos for Malia thanks to YOU!!!

Can you send the birth mom some pics of Clarissa? It might help make you feel better about her loss if you share with her that she got what she ultimately wanted - a wonderful and loving family for her daughter. :)