Wow, it's been a wild ride around here lately. Today I just have a whole mishmash of stuff to talk about.

First, Happy Easter! Here are some pictures I took of Clarissa in her Easter dress this morning: 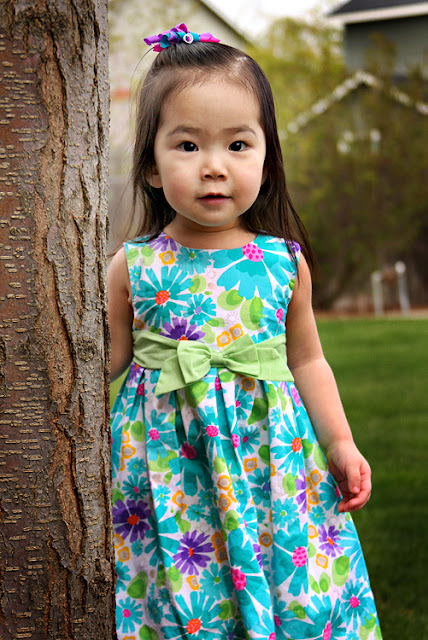 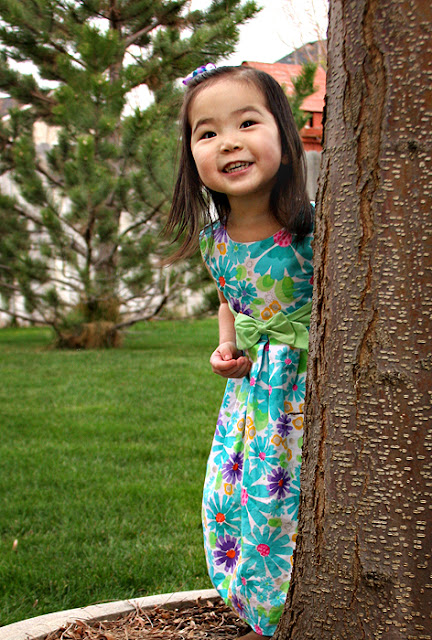 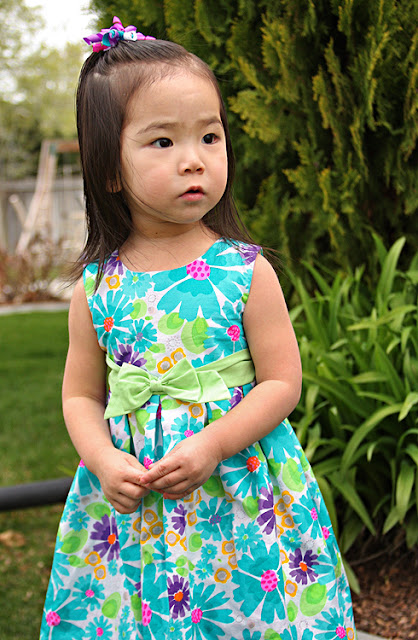 I wanted to get pictures of all three kids together and it didn't happen. Things were just too crazy here this morning. We've had a good Easter. The kids are high on Easter candy, there is Easter basket grass all over ﻿the living room, but it's been a good day and everyone is happy.
Yesterday I took the kids to the grocery store where they were having their annual Easter egg hunt. I think everyone in town was there and it was total chaos but it the kids had fun. They block off an isle for each age group and put candy and plastic eggs all over the floor and when they say go all the kids make a run for it and fill up their baskets. Clarissa didn't quite get it at first so I told her that we needed to clean up the candy and then she went to work! She loves to clean things up, she was tossing candy in her bag like a pro, lol.
The second thing I've been meaning to share for ages and never did was the collages I made for my wall. A couple of years ago I made some cute collages on canvas of Josh and Matthew and put them in our living room. I've fully intended to make new ones and add one of Clarissa since she came home and a year and half later I finally got around to it. Better late than never, I guess!
So here is what is hanging in my living room on 20x20 canvases: 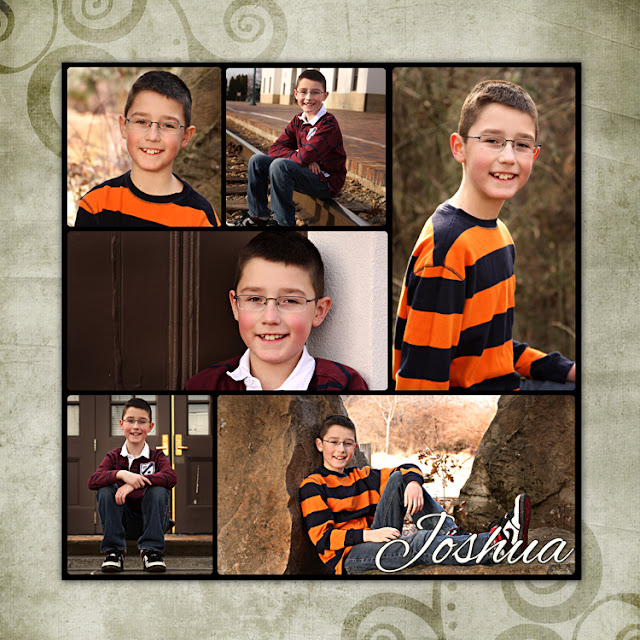 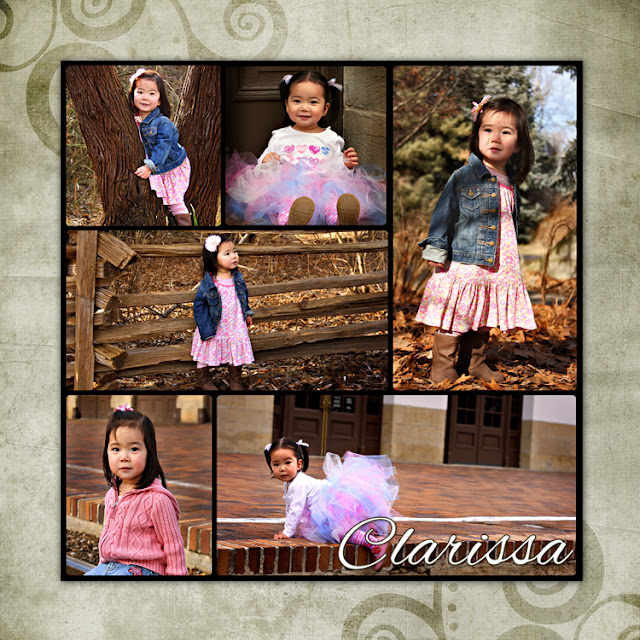 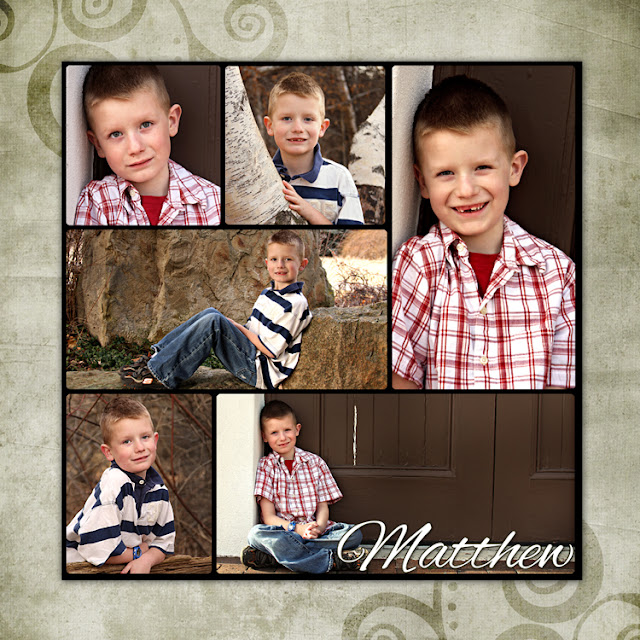 Sorry I've been MIA lately. It's actually been a really bad week. The short version of an extremely long story is that I'm having some weird heart problems that are scaring the crap out of me and I've been in bed most of the week. I went to the doctor yesterday and my heart rate was really high. They did an EKG and it was normal except for it being too fast so tomorrow I'm going to a cardiologist to have a halter monitor put on for 24 hours to see if they can see what's going on.

Today is the first day all week that I've felt somewhat normal, although still not great. I'm sure I'm going to fine it's just been really stressful and my anxiety always makes situations like this worse.

Anyway, today in an attempt to take my mind off of it I managed to get up for a few minutes and take some pictures of Clarissa in a new shirt I just got her. A few years ago for Christmas Josh and Matthew got superhero capes, which they still wear all the time. Clarissa loves to do whatever they're doing and she always wants to wear their capes so I finally bought her one of her own. It's purple satin with a big pink flower on the back of it and she loves it!

A few weeks ago someone from my adoption group announced a fund raiser for their upcoming adoption and they're selling the most awesome shirts EVER!! I took one look at them and knew that Clarissa had to have one. :) My camera was almost out of battery power and the wind was blowing like crazy so I only took a few pictures and I think I'm going to go out and try again this weekend, but I had to share the ones I got. This shirt makes me smile every time I see it (and so does the sweet little girl wearing it!). :) 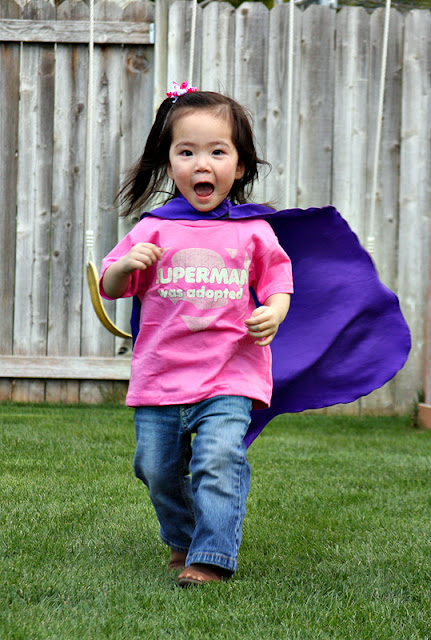 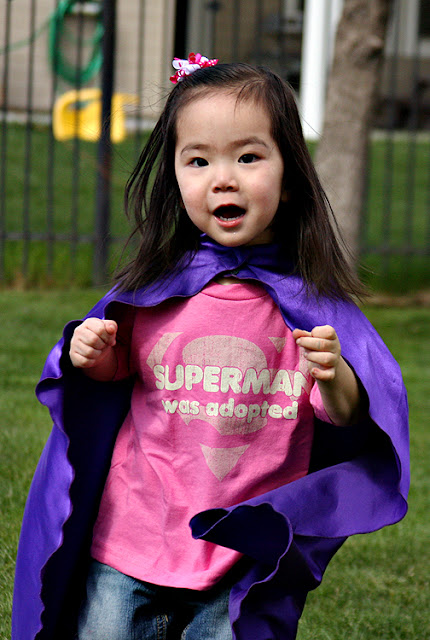 The good, the bad and the painful

Yesterday was my birthday. I turned 36 which means I'm inching closer and closer to 40. The thought of that freaks me out a bit. Actually, the thought of that freaks me out a LOT! I don't feel 36. It was a good birthday though. Shawn always makes a big fuss on my birthday, which is so sweet. He took the whole day off work, got a friend to watch Clarissa for a few hours and took me shopping and out to lunch. He also ordered my favorite cake, which we had with the kids last night. Clarissa is still running around today yelling happy birthday. I think she hopes if she says it enough someone is going to give her more cake. :)

The other good thing going on right now is that I have a new obsession! I had some time to spare last weekend and Clarissa really needed some more clips for her hair so I dug through my craft stash looking for something to make hair clips with. I happened to have a bunch of satin left over from another failed project, so I googled satin hair clips and came up with the directions for the cutest satin flowers ever!! I had a ball making satin flower clips all weekend. Yesterday I even went out and bought satin in more colors so I could make more. I'm going to try to take some pictures and make a seperate blog post about it later this week. They're ridiculously easy to make and SO much fun.

Every time I make clips for Clarissa's hair it reminds me of when we were waiting for her and I made hair clips to pass the time. I remember hot gluing ribbon to alligator clips day after day and wondering what the little girl who would wear them would be like. It turns out that she's more amazing than I could possibly have imagined. I love that little girl so much. :)

The other fun thing happening this week is that Jin-Ha sent me the pictures of Flat Stanley's amazing adventure in Korea! If you remember from my previous post, Matthew's class is doing the Flat Stanley project and we sent ours off to spend some time in Korea. Jin-Ha and her son Do-Kyoung took him all over Seoul and got some really great pictures. He visited two palaces, the Blue House (which is Korea's version of the White House), World Cup Stadium and some other fun places. Here are a few highlights: 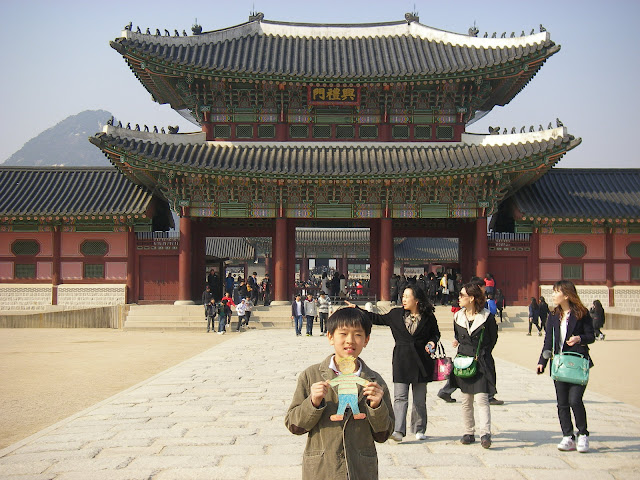 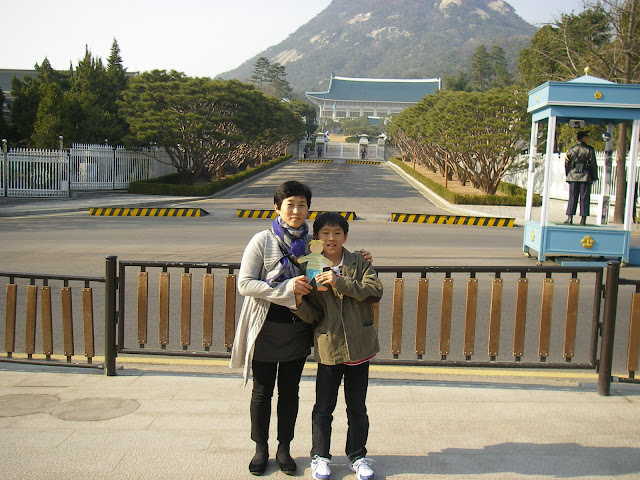 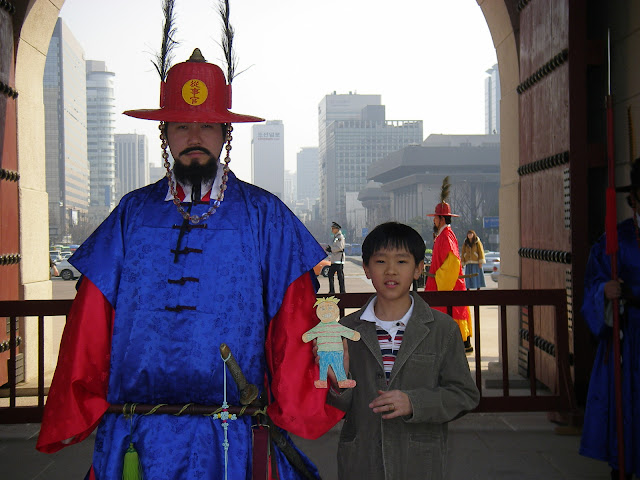 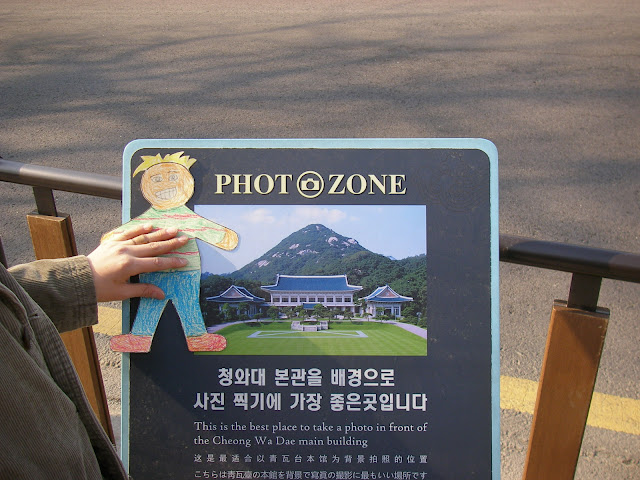 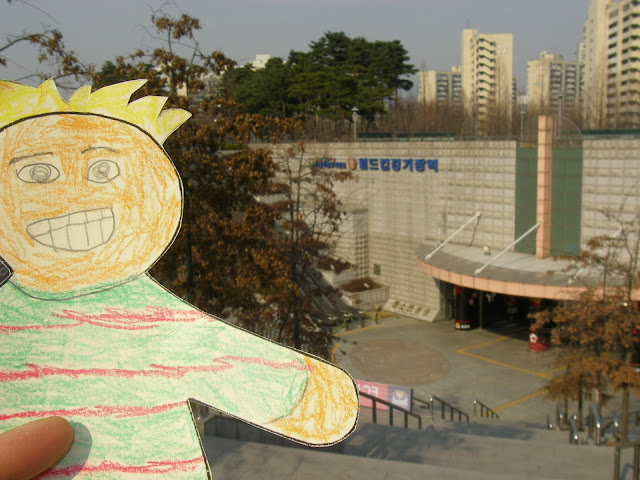 I love looking at those pictures. It reminds me of how much I love Korea and how much I love our wonderful Korean friends. The palace in the first picture is right across the street from the second hotel we stayed in when we were in Korea. It's absolutely beautiful and amazing to see. We didn't have time to visit the Blue House (which is the building with the blue roof in the pictures) but we could see it in the distance from our hotel window. I'm totally jealous of Flat Stanley! The pictures make me want to hop on a plane and go back to Korea right this minute. I miss it and can't wait to go back.

So there are all the good things going on in my life right now. The bad (and the painful) is that I'm having problems with my stupid tooth again! Several months ago I had crown break on a tooth that I've had a million problems with and now it's giving me problems again and I'm super cranky about it. It's had a root canal and two crowns and suddenly it's sensitive to hot and cold and it's been hurting for the past three days. I'm going to have to call the dentist who is probably going to have to pull the crown off AGAIN and I'm not going to be happy about it at all. My insurance doesn't cover a crown less than three years old so every time they take it off and fix it I have to pay for it all out of pocket and it costs a fortune. My dentist is going to be able to retire on my one tooth, lol. I've been trying to ignore it and hope it gets better on its own but that plan isn't working out so well. The last thing in the world I want to do is go back to the dentist for the gazillionth time and have that tooth worked on. I'm grumpy about it.

So I'm off to take some Tylenol and make some more satin flowers. Satin flower pictures will be coming soon! :)
Posted by Wendy at 9:21 PM No comments: