This evening we picked up our Korean exchange student! All the kids in the exchange program choose American names to go by while they're here and he has chosen to go by Michael. He's 12 years old and in Korea he's in the 6th grade but they always move the kids down a grade while they're in the US so he'll be attending 5th grade with Josh while he's here.

We picked him up at the airport around 7:00 this evening and the whole time we were in the car on the way home he kept telling me excitedly that he had presents for our family. As soon as we walked in the door he immediately opened his suitcase and started pulling out gifts. Holy cow, it was like Korean Christmas at our house! I think his mom sent every souvineer in the entire country in his suitcase, lol. He gave the boys really cool t-shirts and socks, some Korean coins, lots of cute pens and other fun school supplies, he gave Clarissa the cutest sandals that fit perfectly, Hello Kitty socks, clips for her hair, he gave Shawn a credit card holder, a keychain, a neat Korean pencil cup...the gifts just kept coming and coming.

Then he gave me an absolutely gorgeous jewelry box, which I was so thrilled to have because I looked at jewelery boxes just like them in Korea and thought about buying one! He also gave me a beautiful necklace, a keychain, some beautiful Korea fans, the absolute cutest fridge magnets that look like Korean food and several other little things that I can't remember at the moment. He just kept pulling more and more things out of his bag! For someone who loves all things Korean as much as I do it was pretty fun, lol. I love anything that comes from Korea. Oh! He also gave me several packages of seaweed, which made me and Shawn giggle because it's the same seaweed that they served us at practically every meal we ate in Korea and it was just too salty for me so I kept sneaking mine on to Shawn's plate when no one was looking, lol. It brought back a fun memory.

Once we got all the gift giving out of the way we showed him around the house and once he realized that we have a Wii he was pretty much feeling right at home, lol. He went right down to the basement to play Wii with the boys and they bonded over that pretty quickly. When we had Melissa here a few years ago it took her some time on the first day to warm up, but it took him about two minutes and he was off playing with the boys like he'd been here for a month.

He's sleeping in Josh's room while he's here and we moved Josh down to the spare room so Josh helped him get unpacked and put his clothes in Josh's closet and then they got ready for bed. I decided that we'll skip church in the morning so that he can sleep in. I'm sure his internal clock is all messed up and he has to be exhausted.

He seems like a really sweet kid, just super busy and energetic like literally every single other Korean person I know, lol. I think we'll have fun with him while he's here. He seems to get along well with the boys, which is great. I hope that continues to be the case!

One thing I thought was really cute was that when we were at the airport the guy that runs the exchange student program gave us the calling card info so that Michael can call home while he's here and said that all the kids needed to call their moms tonight to let them know that they arrived safely. When we got home I mentioned calling his mom and he said that he'd do it later and didn't seem like he was in any hurry to call home. I finally told him that it was time to call and he stopped playing with the kids long enough to make a quick call. I was a little surprised that he didn't seem at all homesick or eager to talk to his mom.

Then when it was time to get ready for bed I got him all settled in Josh's room, told him goodnight, closed the door...and two minutes later he came out and asked if he could call his mom again. He just wanted to tell her goodnight. I think once he slowed down and had a minute to think about it I think he missed his mom more than he thought. He's doing good though, I think he's going to be fine.

Anyway, now it's late and I'm exhausted and I'm going to bed. It looks like we've got a busy month ahead of us! 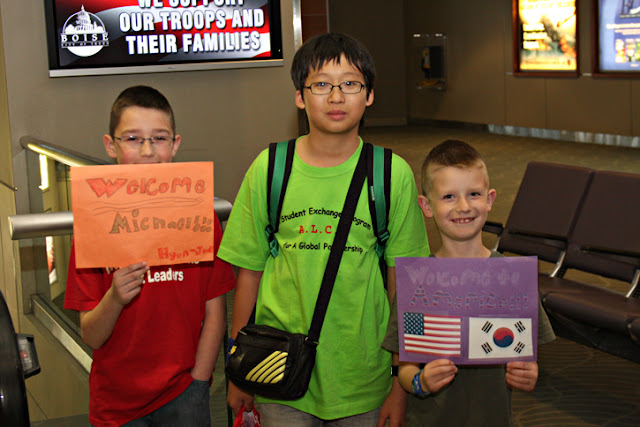