Calgon, take me away

I'm having one of those weeks that every mother is familiar with. You know the one, where you're holding a screaming toddler who is really mad about something you can't seem to descipher while stepping on spilled crackers that someone didn't bother to clean up while arguing with your tween about what he can and can't watch on TV and in your brain you're dreaming of sitting on a white sand beach somewhere in a different zip code than your children with nothing but silence and some lemonade. I love my children dearly. Most days I just want to hug the stuffing out of them. This week....well, a quiet sandy beach sounds awfully nice. :)

Both boys stayed home from school again today because they both still had slight fevers this morning, but by about 10am the fevers were pretty much gone and they were both feeling better and then they were really bored. In the midst of the "I'm really bored and there's nothing to do" whining, Clarissa chose this morning to have a whopper of a toddler meltdown about something I'm still not clear on. After several days of being cooped up in the house I think we were all a little on edge this morning. Poor Shawn called in the midst of the family meltdown to see how my day was going, lol. I may or may not have told him. Loudly. :) He's a trooper, he came home for lunch and picked the kids up and took them through the McDonalds drive-thru and gave me the few minutes of peace and quiet I needed. I took that time to decide that I wasn't going to pack up and find a deserted beach after all and we were all much happier this afternoon. :)

Tomorrow the boys are going back to school, I'm going back to the gym and things should finally go back to normal. It's just been a long week for everyone around here.

So today I'm cheating on the photo again. I'm cheating so bad that this isn't even a photo. It's a scan of a drawing that Clarissa made this morning. I suppose I could have taken a picture of it but you wouldn't have been able to see it as well and this was too cute not to share.

Clarissa absolutely loves to draw and color. Neither of the boys had any interest in coloring when they were two, so I've been surprised at how much Clarissa loves it. We sit down at the table with crayons and paper together and color a lot. I also have a drawing app on my ipad and she loves to sit with me while we draw pictures.

One of the things she always asks me to draw is "happy". That means a simple happy face. I draw each part of the face and we name each feature. Eyes, nose, big smiley mouth, ears and hair. Sometimes she wants me to hold her hand and guide her while she draws it. I draw her a million happy faces a day. Sometimes I throw a sad face in there and it makes her giggle. :)

So today in an attempt to stop the toddler meltdown I asked her if she wanted to color. I got her some paper and some crayons and sat her down at the kitchen table so I could have a moment of peace and quiet. A few minutes later she came over to me and said "look mom! Happy!"

And what do you know-that kid drew a happy face! All by herself! It was just the head and eyes and mouth (which doesn't look all that happy, lol) but I had no idea she could do that all by herself! I was super proud of her. A happy was just what I needed today. :)

So here it is, Clarissa's masterpiece. The bottom is something else, I believe she said it was flowers, which is something else we draw together a lot. I love that little girl. She always knows how to put a smile on my face. :) 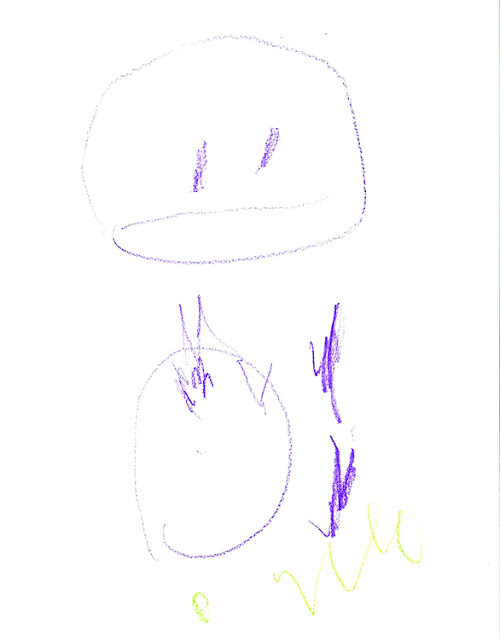