First of all, I have exciting news! We got a call from the exchange student agency that placed Melissa with us a few years ago and they asked us to take another Korean exchange student for four weeks and we accepted!

For those of you who weren't here when Melissa was staying with us, our kids elementary school has a sister school in Korea and there is an agency that sends Korean elementary school students here to experience life in the US for a month. We had a 10 year old girl named Melissa come stay with us a few months after Clarissa got here and we had a good time with her. She went to school with my kids everyday while she was here and pretty much just lived like a member of the family.

They've asked us several times since to host another student but life has been too hectic here and I just really didn't feel up to it. They called us again today though and said that they're trying to place two more boys that are coming in a few weeks and wanted to know if we would take one. I talked it over with Shawn and he was fine with it and then I asked the kids and they literally jumped up and down with excitement and begged me to do it, so I decided to go for it!

The guy at the agency read me the profiles of both boys and let me choose which one we wanted. I asked him if it mentioned if either boy takes taekwondo and it didn't but he's going to find out on Monday and let me know. If one of them is into taekwondo we want that one because I think that will be extra fun for my kids and probably fun for the Korean child. Most boys in Korea take taekwondo so I'll be surprised if neither boy takes it. It would be fun to take him to taekwondo with the boys. The Korean instructors there would be really excited to have a Korean taekwondo student visit!

Both boys are in the fifth grade so whichever one we get will probably be in Josh's class, which will be fun. They try to put the child in the same class as the host child whenever they can.

Whoever we end up with will arrive on May 22nd and leave June 21st. It will be really fun for the kids. It will make life a little more hectic for me, but I think it will be worth it. It's a great cultural experience for the boys. They learned a lot about Korea when Melissa was here.

So with that news out of the way I can move on to my photo of the day. I kind of struggled with motivation today and drug my feet a little because I couldn't think of anything good to take a picture of. I wasn't feeling creative today at all. I finally decided to experiment with a photo I've been wanting to try for a while. Frankly, this photo has been done to death. If you're in to photography at all, chances are you've seen it done. I've seen it a million times and I've seen it done much better than I did it. I''m not super happy with the results and probably wouldn't have even posted it if I didn't need a photo for my challenge, but I guess it turned out fine enough. It looks like a really easy picture to take but it was harder than I thought it was going to be! The pencils kept rolling all over the place and just when I would get them perfect my camera strap would dangle and knock one or my knee would hit the paper and make them roll around and I'd have to reposition them again. I also really struggled with the lighting.

I managed to get one that looks half decent though, so here it is. I might revisit this idea someday and try it again. 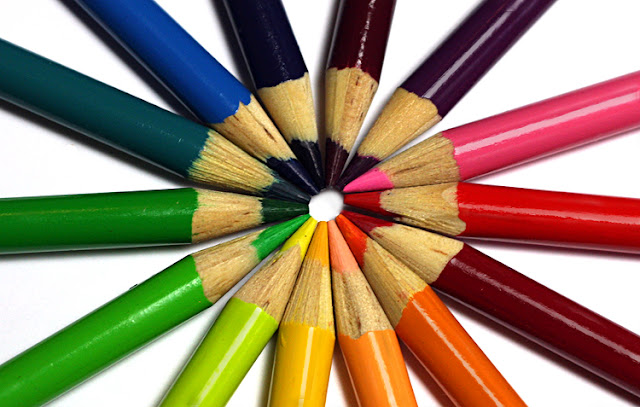