I was digging through my memory box yesterday and I came across the baseball glove my dad bought for me when I was a kid.
My dad was a big sports fan. Actually that's a gross understatement. My dad was the biggest sports fan there ever was. :) He was very athletic, played high school sports, dreamed of being a major league baseball player, coached all our teams as kids and knew more sports trivia than anyone I had ever known. He's the reason the local radio station that used to give out prizes for daily sports trivia questions had to institute a rule that you could only win once every 30 days.

When he and my mom got married he couldn't wait to have kids so he could share his love of sports with them. I'm sure he had dreams of playing catch in the backyard and cheering from the stands as his athletic children dominated the varsity teams. Unfortunately he fathered three of the least athletic people you'll ever meet.

My sister was born first and she was petite and girly and defiintely not going to be sliding through the dirt into home base any time soon.

Then I was born and as a kid I was tall like my dad, more athletically built and a total tomboy. I think he had hopes that I was going to be his sports star. When I was probably about seven he took me to the sporting goods store to buy me my first baseball glove. It was almost 30 years ago and I can still remember every second of it like it was yesterday. He was really excited about it and I remember trying on lots of different gloves looking for the right fit.

We finally found a beautiful blue suede glove that was perfect. I remember that I liked it because it was so soft. We took that glove home and played catch in the backyard many times. Over the next few years he coached my t-ball teams but unfortunately I didn't inherit his baseball talent and I finally asked to quit. I''m sure he was dissapointed.

I never really played sports after that. I was always really tall and people used to asked me constantly if I played basketball and it used to drive me crazy. My dad taught me how to shoot a basketball, of couse, but I was never good at it.

Five years after I was born my dad was finally blessed with a son. There are some really cute pictures of my brother as a baby wearing a little baseball uniform. I'm sure my dad thought that he was finally going to have a child he could play sports with. Unfortunately it didn't happen. My brother has so many amazing talents but sports really isn't one of them. He's incredibly musically gifted and I'm super proud of him. He can play any instrument he picks up, which I'm in awe of. He played t-ball and basketball as a kid and my dad coached his teams but eventually he asked to quit too. There would be no sports stars in our family.

My dad was a good sport (ha!) about it and he always encouraged us to do what we were good at. We had friends of the family who had kids who played high school sports and my dad would always go to the games and cheer for them. He also played on city baseball teams every summer that I can remember.

I never played sports again after a few years of t-ball but I always hung on to the baseball glove my dad bought me. It brought back good memories of playing catch with my dad and even when I was young I knew how much it meant to him to buy it for me.

My dad died when I was 20. I miss him so much. He never got to meet his grandkids. My kids would have loved him. I don't have many tangible reminders of him anymore but I still have that glove and it still makes me smile every time I see it. I always kind of thought that maybe I'd pass it on to one of my kids if they were lucky enough to inherit my dads amazing athletic ability. Unfortunately baseball has never been something my boys have been interested in so the glove stays in my memory box where I can get it out and look at it when I miss my dad. The color has faded and it's not as soft as it once was, but it's a priceless heirloom to me. 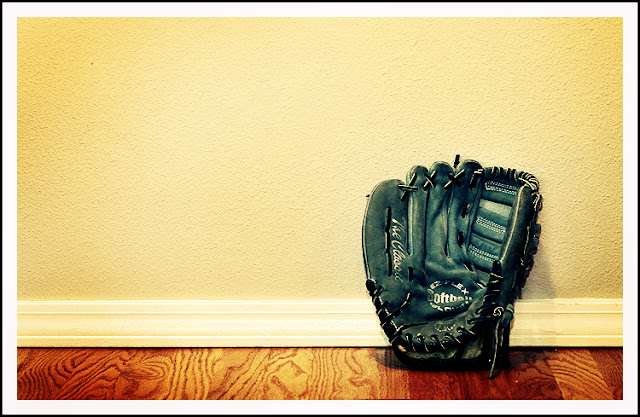