I totally flaked on the picture yesterday. I had plans to go outside and take some yesterday afternoon but it was rainy all day and I just never got around to it. That's a lame excuse. I tend to not be very productive on Sunday afternoons.

This morning I woke up thinking I'd get ready to go to the gym but Clarissa had a fever so we stayed home. I don't know what's up with her, she's acting happy enough, just a little tired and she was pretty warm this morning. We spent the morning cuddled up on the couch watching Sesame Street and reading lots of books.

On another topic, I've spent the past few weeks researching cures for the heartburn and acid reflux I'm still having problems with. I had to go off the medicine I was on because of the heart problems it was causing but when I went off of it all the stomach issues came back. I've tried a bunch of different kinds of antacid medications and I can't take any of them because for some reason I have severe side effects to them. I also don't really WANT to take medicine for it, I want to fix the problem.

I've tried changing my diet, chewing gum, reducing stress, eating lots of apples and about a million other suggestions I found on the internet. Nothing helped. I've been having all sorts of various stomach issues for months and I'm tired of it. I was getting ready to make an appointment to have a bunch of expensive GI tests done.

Then last week I came across some articles on Aloe Vera juice. Aloe Vera is an amazing healing ointment on the outside of your body, so the thinking is that by turning it into a juice and drinking it it can heal the inside of your body as well. There's actually some interesting research on all the things that it can heal. I did a lot of research on it and decided that it was worth a try so I went out and bought a huge jug of it at Walgreens. I drink four ounces of it in the morning and four ounces at night. It doesn't taste great by itself but it's not bad if you mix it with a little juice. After taking it for a few days my stomach issues were noticibly better. Then I added acidophilus and papaya enzyme and for the first time in months my symptoms are almost completely gone. I feel a million times better. I wish I had tried this a long time ago. One of my "30 days to a better me" goals was to figure out what was up with my stomach and fix it. I will definitely be a better me if I'm not in pain all the time!

Halfway into my 30 day experiment things are going really well. I've rediscovered my love of photography, I've reduced the stress in my life, I've gone back to the gym, I fixed my stomach problems, I'm making an effort to step outside my comfort zone and say yes to things I've been saying no to and I'm a lot more enthusiastic about life again. It's good!

Saturday our exchange student gets here (one of the things I've been saying no to and decided to say yes to!) and we're getting excited. We don't know anything about the student we're getting other than it's a boy. We're supposed to have more information by Wednesday. The boys are especially excited about it, I think this is going to be a fun opportunity for them.

OK, so now on to today's photo! I went out and checked on the baby birds this morning and I can't believe how much they've grown! Less than a week ago they were ugly little featherless creatures and now they're getting fat and they have lots of feathers! They almost don't fit in the little nest anymore! It won't be long before the mama bird is teaching them to fly. I'll miss them, I've really enjoyed checking on them every day.

Check back tomorrow for more pictures! 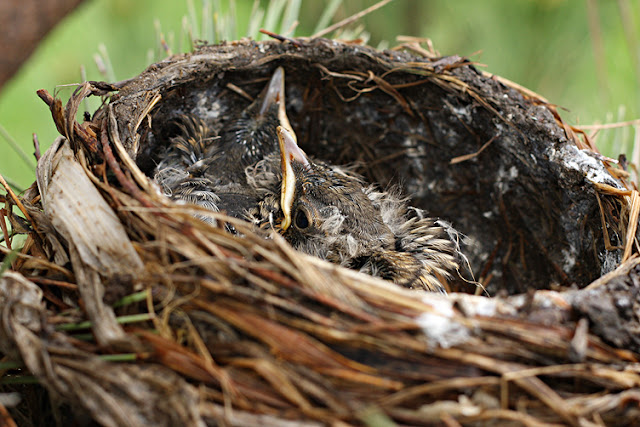 I always hate to do this, BUT I have been reading your blog for quite some time and I LOVE it. I came across it through a friend and have been a silent reader ever since. I am a stay at home mom of 4in the midwest. I too have suffered from heartburn/acid reflux relentlessly and am on a high dose of medicine to keep it under control!! I would LOVE to try something that would help so I could reduce or get rid of the meds all together. I even had to have surgury in January on my vocal cords due to damage done to them caused by the acid. I am certainly going to try the Aloe juice and see what happens. Sorry about the sudden jump in to your comments. I always feel like such a stalker but I really have found some wonerful blogs with wonderful people on them that I enjoy to read! My husband and I are hoping someday when are children are a little older to adopt as well.

Welcome! I'm glad you introduced yourself! I hope something I said helps your reflux. I know how miserable it can be!

Here's the aloe juice I drink. I drink four ounces in the morning and four at night mixed with a little cranberry juice.


Here is the acidophilus I take. I take one a day, although I read of people taking more.

Here is the papaya enzyme I take. I chew two with breakfast and two with dinner. They taste kind of yummy!

I'm obviously not a doctor, so I can't tell you what is safe for you to take, but I researched it and feel good about taking it. It has helped me so much!

Thanks for all the info! I can't wait til I can get these things and try it!