I have two new loves in my life and my blog title says it all. :)

So as I've said before, I've committed to a year or service, and one of the things I decided I wanted to do was learn how to make infant hats that I can donate to NICU's at the hospitals in our city. I talked to one of our neighbors, who is a maternity ward nurse, and she said that they love getting donations of those hats. I've never had a baby in the NICU but I can imagine that if I did a cute, brightly colored hat on my baby might bring a smile to my face for a minute and I hope that I can do that for someone. They also put the hats on the babies that pass away and I especially want to do something nice for those parents. They especially need pretty hats for their beautiful babies.

I'm not even a tiny bit crafty and I can't sew, crochet or knit, so I did a little of research and decided to go the easiest route, which is loom hats. They look basically like a crocheted hat but if you have no crochet skills it's much easier to learn! In case anyone wants to try it, you can buy a set of looms at Walmart next to the yarn. They're not expensive and looming is ridiculously easy to learn! I bought the looms and yarn, watched a 10 minute video on YouTube that showed me how to make a hat and I was in business!

I started out experimenting with different types of yarn and I found that the type of yarn you use makes a huge difference. The cheap bargain Walmart yarn makes kind of scratchy hats. After a lot of experimenting and trips back to yarn department I discovered the PERFECT hat making yarn! It's called Caron Simply Soft. If you're going to make hats, that's the yarn to use. I've tried every type of yarn known to man and the Simply Soft yarn made the cutest hats by far. It's also the easiest on my fingers, which is great, because you have to keep pushing the yarn down on the loom with your thumbs and some of the thicker, scratchier yarn made my thumbs hurt so bad that I had to stop making hats for a few days while my thumbs healed.

I started out making a couple of hats....and then a few more...and then I became obsessed with making hats and now I can't stop! I try to sit down for a couple of hours in the evenings whenever I can, I make them during Clarissa's naptime and any other time during the day that I have a few minutes to sit down. They're extremely easy to make and not terribly time consuming. They're easy to pick up and put down when I need to. I'm having so much fun making them that I keep going to back to Walmart for more yarn. I now have every color of Caron Simply Soft yarn that Walmart sells, except for a fluorescent orange that was a little too wild and crazy for baby hats. It's a sickness, really. Yarn is taking over my house, lol.

Anyway, while I've been sitting around making hats for the past few weeks I decided that I needed a new TV series to watch while I worked. That's where my other new love comes in. :) I bought season one of Gilmore Girls, which I had never seen, to watch while I work. How did I manage to miss out on that show when it was on? I absolutely love it. I plowed through season one and two and I'm now in the middle of season three. There are seven seasons. I wonder how many hats I can make by season seven!

So far I've made almost 40 hats. I counted 36 of them earlier today but I know that there are a couple more of them floating around. Clarissa has taken off with a few of them to put on her dolls. :) I don't really know how many I plan to make. At one point I thought it would be fun to challenge myself to do 365 of them before the end of the year, essentially making one a day, but I don't know if I'm going to hold myself to that. I'm afraid that giving myself a quota will take the fun out of it and at the moment I'm having lots of fun! I've made almost 40 in a month though, so at this rate it's entirely possible that I could make that many if I keep it up!

I'm going to take the first batch over to one of the hospitals in the next week or two. We have three big hospitals in our city. I'm hoping to eventually make a pile for each of them.

So that's what I've been up to lately! I took some pictures of my hats and yarn this morning. Enjoy! I'll be back this weekend to share another big day we have coming up-Clarissa's third birthday! Can you believe she's going to be three?! Check back to see if I can sucessfully manage to get her sit still for a birthday picture! :) 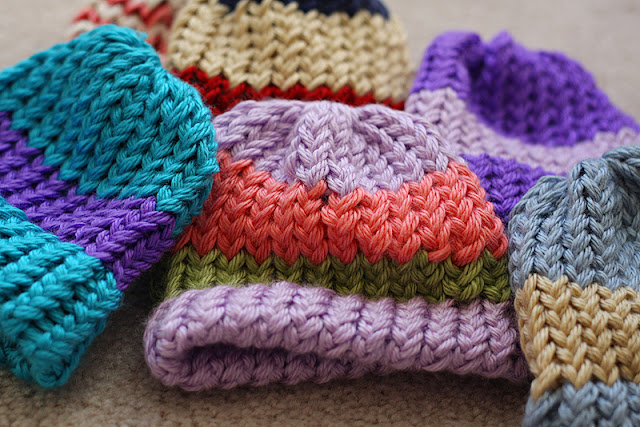 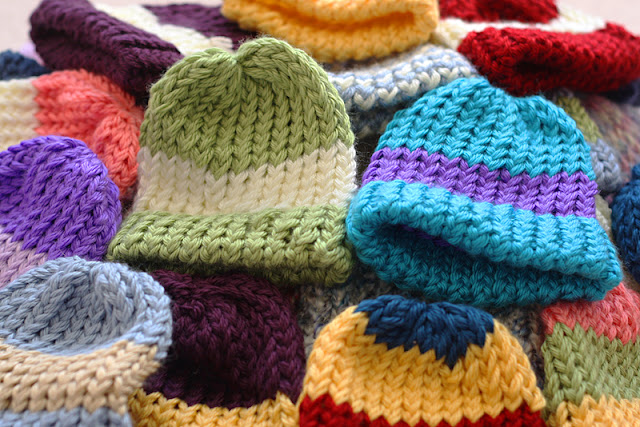 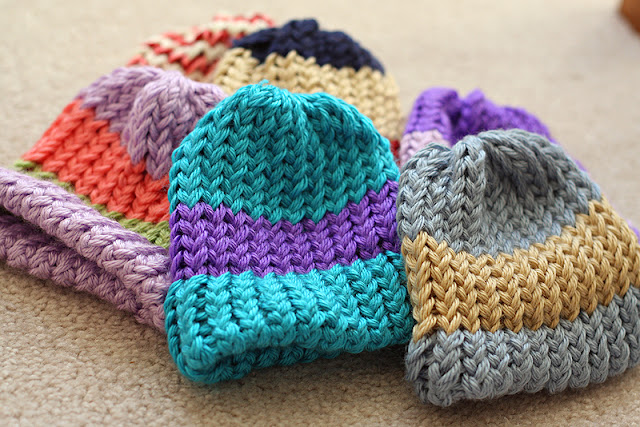 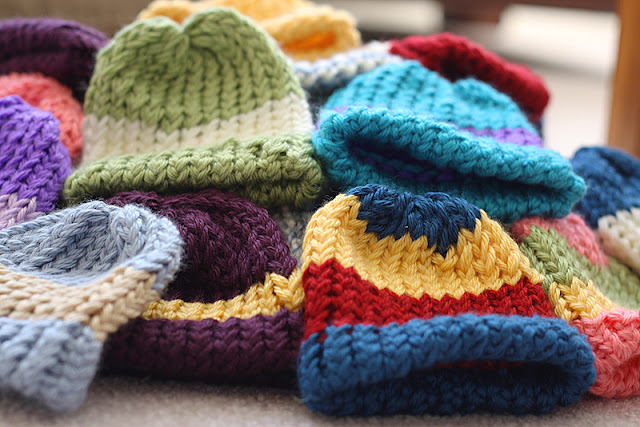 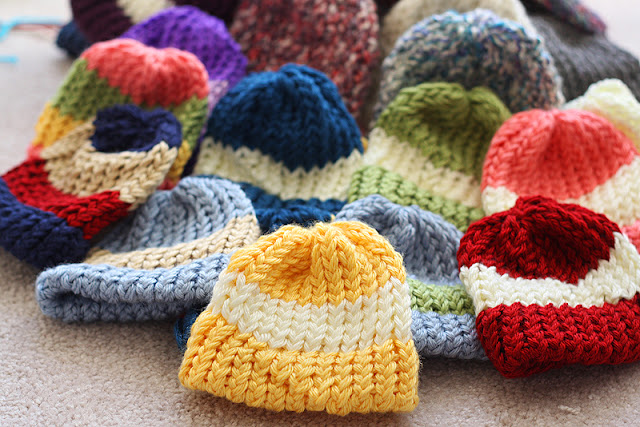 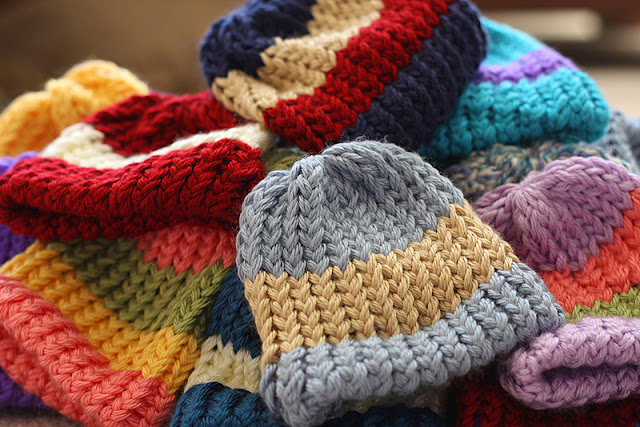 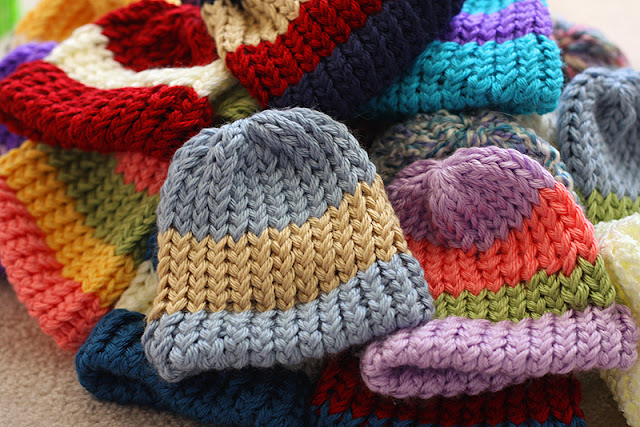 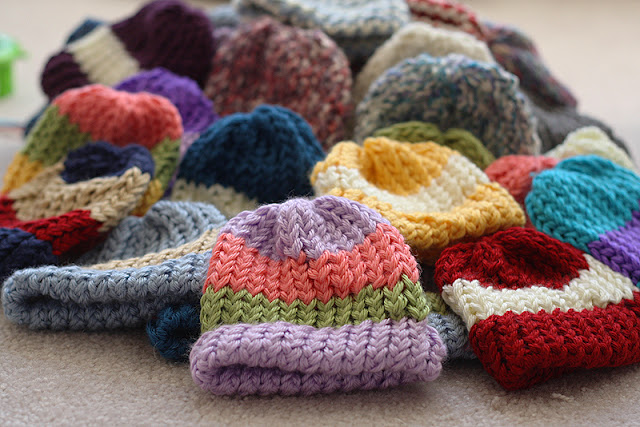 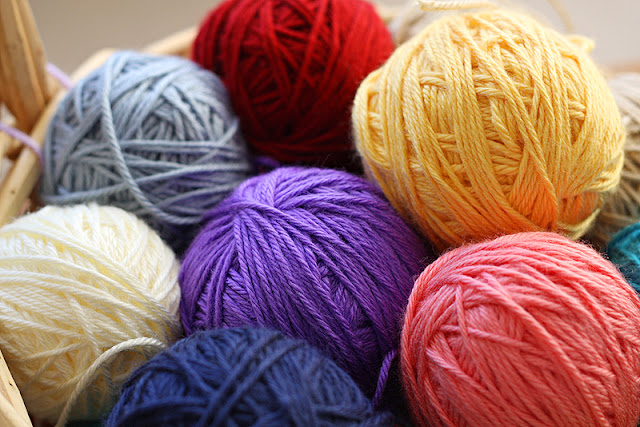 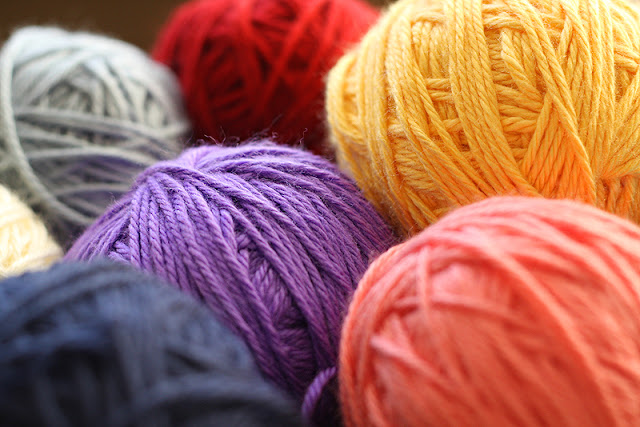 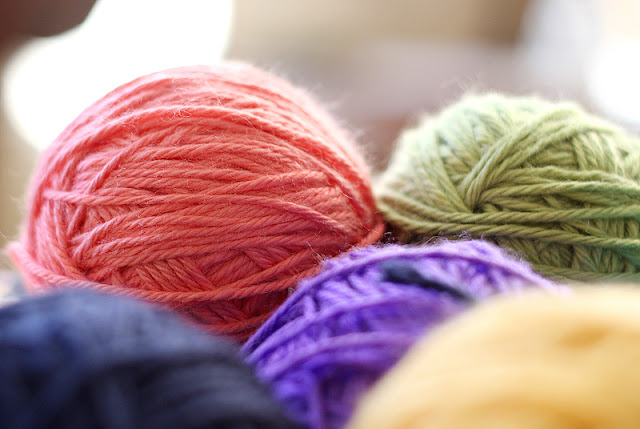 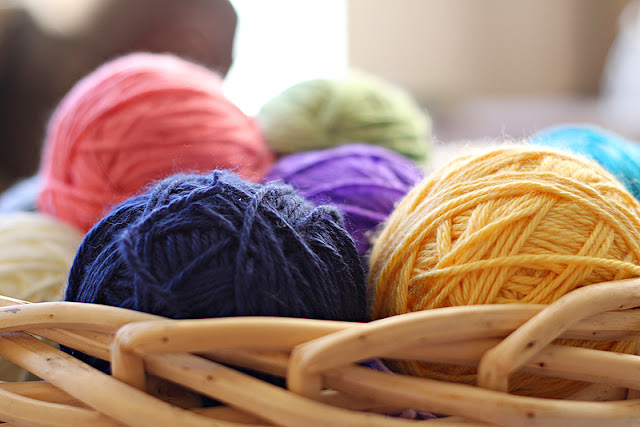 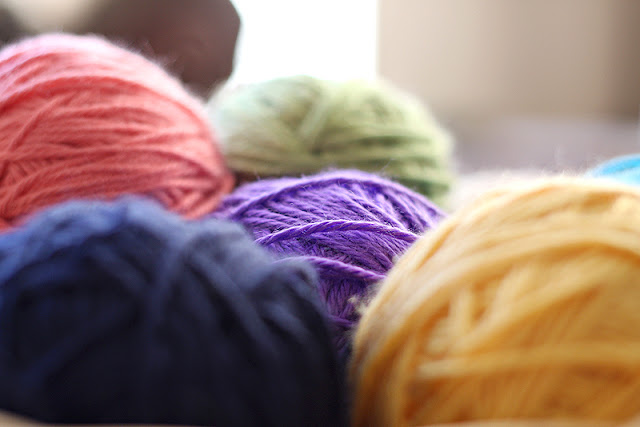 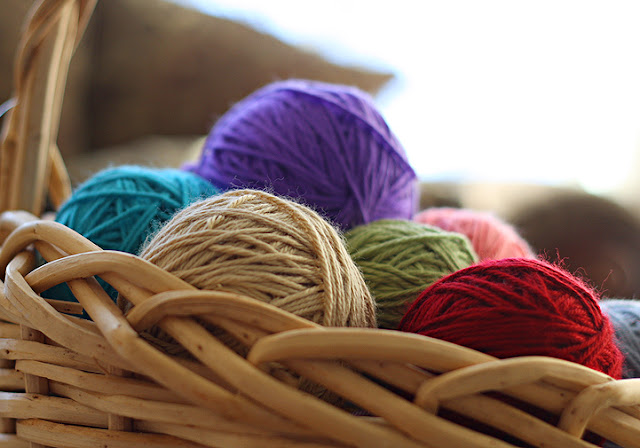 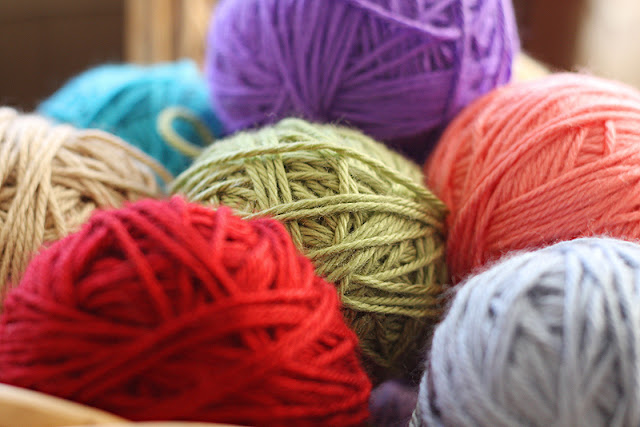 Those at adorable.....and to think of all the good you are doing with them! How long do you think each one takes?

I takes me around an hour or so to make one. It's faster if you do it all one color, but I'm having so much fun playing with the colors and adding stripes that it takes a little longer because you have to stop and swap out the yarn. I think they're cuter that way though!

Those are adorable! What a nice thing to do! You are going to make some mamas very happy.

I too love the Gilmore Girls. Love that show.

Has Clarissa ever worn "the dress"? I remember way back in the Babycenter days, your siggy had "the dress" in it. Did I miss pics of her in the dress?

Looks lovely! Can you direct me to the video that you used. I am interested in making these and I absolutely have no skills :)