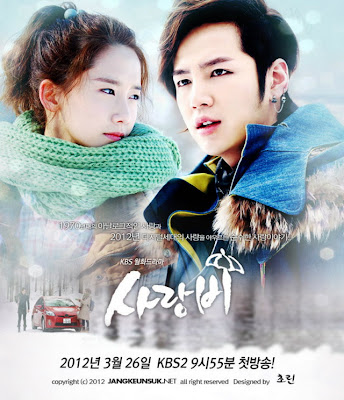 It's Korean drama time! It's been a while since I've watched a Korean drama. It's so time consuming to get through them and so addicting that I can only watch them if I know I have a lot of time to spare because once I start watching it's hard for me to tear myself away until it's over!

We're having a pretty quiet week around here though, and Shawn and the boys are going camping Friday night so I knew that this was a perfect time to engross myself in a new drama.

The drama I'm watching is called Love Rain. I've actually been REALLY excited about this one for a few reasons! It was made by the same guy who did my favorite drama of all time-Spring Waltz. Spring Waltz is absolute perfection. No matter how many dramas I watch, nothing measures up to that one. There hasn't been another one like Spring Waltz in a while but when I heard that the guy behind that one was coming out with a new one, I got super excited!

I got more excited when I read the basic plot and realizes that it sounds a lot like my all-time favorite Korean movie, The Classic. That was one of the first Korean movies I ever watched and I absolutely love it. It was really beautifully done and makes me cry all the way through it no matter how many times I see it!

So I pretty much knew that Love Rain was going to be a drama for me! I've actually been aware that this drama was coming before it even started airing, and I could have watched it weekly as it aired on Dramafever.com, but I forced myself to wait until it was done airing so I could watch the whole thing at once. Korean dramas are so addicting that I hate watching them one episode at a time. They're way more fun when you can stay up until 1am watching episodes back to back until you're too tired to watch one more second!

Love Rain is 20 episodes long and each episode is just over an hour. I started watching it yesterday and I'm now on episode 6. So far it's really good, although the first couple of episodes dragged a bit. It took me a little while to get into it at first, but now I'm completely hooked!

The basic premise of the story is this. The first part takes place in the 1970's. Two college students meet and fall in love instantly, but they're both too shy to really do anything about it. They finally admit their feelings but then things happen and they end up apart.

In episode 5 it fast forwards to present time and they've both moved on with their lives and have had children but have never gotten over that first love. By coincidence their children meet each other and sparks fly, but they're very different people and I'm sure it will be complicated. Korean dramas always are!

So far it's a really sweet story about first loves and it's cute and funny and I really need to stop writing this blog post so I can go back to watching it. I just put Clarissa down for a nap and my drama watching time is limited!

So if you love Korean dramas as much as me, go watch Love Rain! If you've never seen a Korean drama, you seriously should, you're missing out! :)
Posted by Wendy at 2:16 PM