I'm having an awesome Monday morning!

At 5:30 this morning we got Josh off to Scout Camp. I had a hard time letting him go and I'm going to miss him like crazy all week, but he was really excited about it and I think this is going to be a positive experience for him. He's going to have a lot of fun.
Then I weighed myself and I've lost another pound. YAY! That brings it up to a piddly three pounds, but it's a start! At least I know it's working.
Then I checked Facebook and found something fun. I have a super cool cousin who loves to travel and she's been all over the world. She happens to be in Seoul this week, and I couldn't possibly be more jealous!! :) Anyway, a couple of days ago I told her the about the restaurant that Shawn and I loved so much. I had no idea what it's called, I only know that it's down an alley in Insadong and that it has a tree in the middle of it. One of our favorite memories of our trip to Seoul was eating in that restaurant and then spending an entire afternoon searching for it so that we could eat there again.
So this morning when I woke up I found a message on Facebook from her, and she found the restaurant! She ate there and took a picture for me! I was so excited, she even got the name of it. It's called Chon. I can't believe she found it! Now that I know the name of it, I could look it up and it even has a website! http://insadongchon.com. It totally made my day. I found a picture of the restaurant online. Here it is! 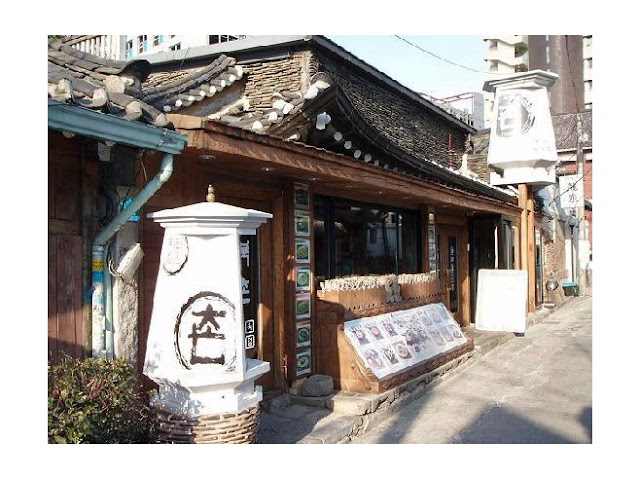 Then I went on my bike ride, which I have to do an hour earlier this week because with Josh at Scout Camp I can't leave Matthew and Clarissa home alone so I have to go before Shawn leaves for work. The fact that I'm happily getting up an hour early to exercise is kind of blowing my mind, lol. Riding my bike has turned me into a whole different person. A person who gets up an hour early to exercise. Crazy. :) In fact, my two good friends walk together every morning and they didn't even bother to ask me if I wanted to do it with them because they knew I wouldn't. This morning I passed them on my bike. Ha, take that, friends who didn't think I'd get up early to exercise. :) Look at me now! lol (p.s. Hi Karen! You looked cute this morning! Thanks for telling me I didn't look stupid in my fat pants!)
When I got home from my bike ride I checked my stats on my Iphone app and I have officially ridden 100 miles on my bike since last month!! ME! I rode 100 miles! The same person who couldn't even make it to the park on the first day and the same person who thought those first three miles were going to kill her has ridden 100 miles! I'm proud of me.
So to recap, Scout camp, 3 pounds, the restaurant with the tree in the middle is called Chon, 100 miles on my bike, ha to my friends who underestimated just how much I ROCK, super good Monday morning.  And now I shall drink a smoothie and take a shower.  :)
Posted by Wendy at 9:11 AM