Remember a few weeks ago when I was posting about my favorite things and I posted about how much I love nail polish, but only for my toes because my fingernails aren't girly?

My fingernails got girly! For the first time in my life I decided to try growing them out and having girly fingernails. I don't know why, I think it's part of this whole reinventing of myself. The new Wendy wakes up early to exercise and paints her fingernails, I guess. :)

I've only been growing them out for a few weeks. I bought this stuff called Rejuvacote, which is like clear nail polish that you apply once a day that is supposed to make your nails strong so they'll grow, and it turns out that it works. My ugly fingernails are starting to get pretty for the first time! It's only been a few weeks, so they're not that long yet, but they look better than they have in years.

So I decided that now that my nails are growing I wanted to start painting them. I have a ton of nail polish because I paint my toes all the time, so I figured I'd jump right in and paint my fingernails. Except that when you've never really painted your fingernails in your life and then you try to paint them fun bright colors, it just looks really weird. I'm not used to it. I've tried to paint them a few times over the past few weeks but it looks weird to me and I take it right back off.

So I decided to start slow and paint them a light, barely there color. I used a color called Best Boy Friend by Essie that is a super light mauve that practically looks like clear polish unless you use three coats. It made my nails shiny and pretty with just a hint of color.

After living with that for a few days I decided to add some gold sparkles to it, so I used another Essie color called Gold as it Gets, which is a really pretty shimmery gold. You almost can't even see it unless you look at it in the right light. I love the effect, it's really pretty.

After living with that for a few days I decided to get really crazy (well, crazy for me, which is really...not) and I painted the tips with a Sally Hansen Gem Crush color that I think is called Big Money. The Gem Crush polish is super fun, but a really weird consistency. It's thick and chunky, so I used it very sparingly and just painted a light coat on the tips of my nails.

For my very first girly nail manicure I think it turned out kind of pretty, here are the results: 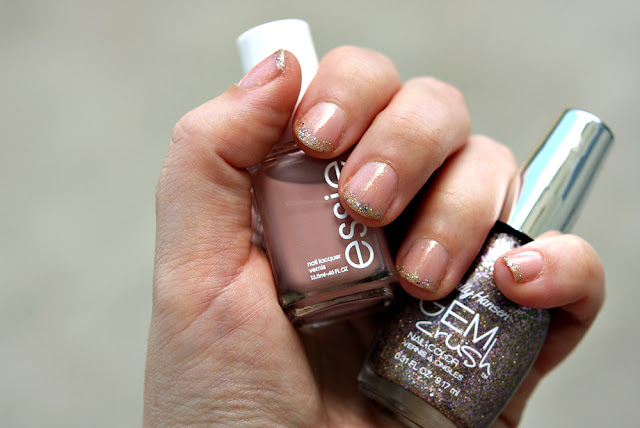 Eventually I'm going to be brave enough to put fun colors on my fingernails and I'm excited for them to grow out a little longer, but this was fun to start out with.

I love nail polish blogs. Even though I've never had pretty fingernails and only painted my toes, I love to look at nail art blogs and look at all the cool designs and neat polish tricks. If I get better at it and do something else fun with my nails I will be sure to report back! :)
Posted by Wendy at 4:27 PM