Our Year Of Adventure: Take a Family Bike Ride

We did it!! After a LOT of work, we finally got the entire family out on a bike ride! It was a short ride, but long enough that I decided to go ahead and count it for the Year of Adventure list. I'm positive that we'll be going on plenty more family rides this year!

This goal took a lot more work and preparation than any of the other goals we've done this year. When I put it on the list I knew that it was going to take some work. I was afraid that I was too out of shape to even do a good family bike ride, Matthew couldn't really ride a bike very well, we didn't have bikes for both boys that fit them, we weren't sure what we were going to do with Clarissa...there were a lot of hurdles to pass before we could pass off this goal.

So I've done a lot of work over the past month, which I obviously won't rehash since I've already shared most of it! We got bikes for the boys, I got in shape enough to go, we got the bike trailer working for Clarissa and Shawn spent some time with Matthew getting him some more practice on his bike.

And FINALLY-we realized this evening that everyone is ready and we decided to take test run around the neighborhood. It didn't go super smoothly at first. Shawn had been practicing with Matthew earlier today and Matthew has a great bike that was working perfectly and as soon as we started off on the family ride, his brakes started making a weird noise and rubbing on the wheel when he rode. Of course that would happen! We've had so many problems with our boys bikes. I'm sure that the brakes just need to be adjusted and it will be fine. We decided that it wasn't a big enough deal to turn around and the bike was still totally rideable for a short ride, so we kept going.

We ended up just making a couple of laps around the block. I don't think we even went a mile. It was mostly just a test run. I want to do a few shorts rides through the neighborhood to make sure that everything is working right and everyone can keep up and ride together before we haul everything over to the green belt for a long ride.

It was a short ride, but we did it and it was fun! Bike riding is most definitely going to be a regular family hobby. Josh and I especially have really developed a love for bike riding over the past few weeks. Both of us just want to keep going and going. Shawn and Matthew are loving it too, but they haven't had a chance to go out as much as we have. Clarissa has just been excited to ride in her "yellow bike", which is what she calls the bike trailer. I'm looking forward to next summer when she'll be old enough to get her own bike!

When I started this year of adventure list, I knew that it would be good for our family but I don't think I realized HOW good it would be. We're learning so much and having so much fun trying new activities. When I put bike riding on the list I hoped that we'd take a few rides sometime during the summer but it's turned into way more than that. It's part of our lives now. We can't wait to get back outside and hop back on our bikes every chance we get!

Here are a few pictures I took before we set off on the big ride! (Don't worry, Shawn and Clarissa put their helmets on before we went.) :) 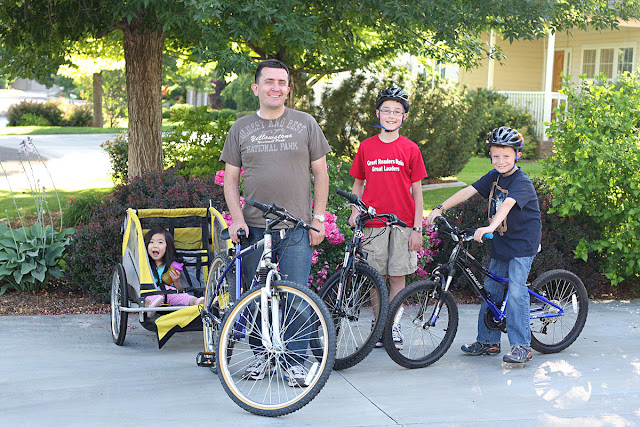 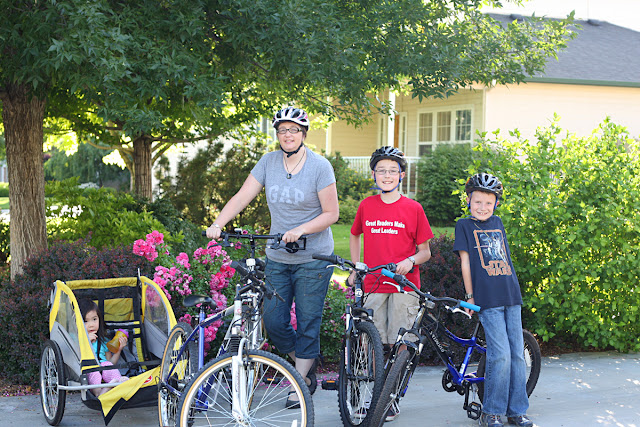 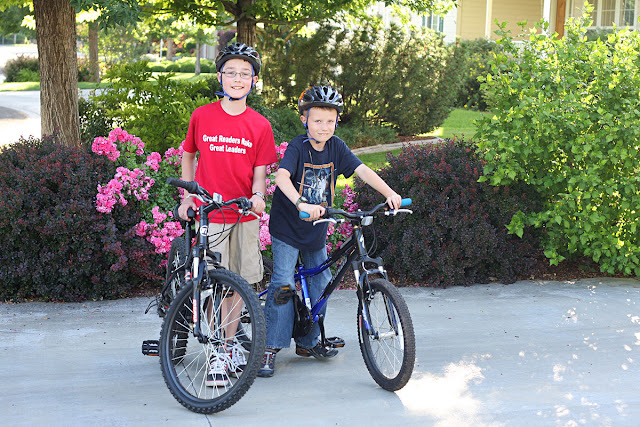