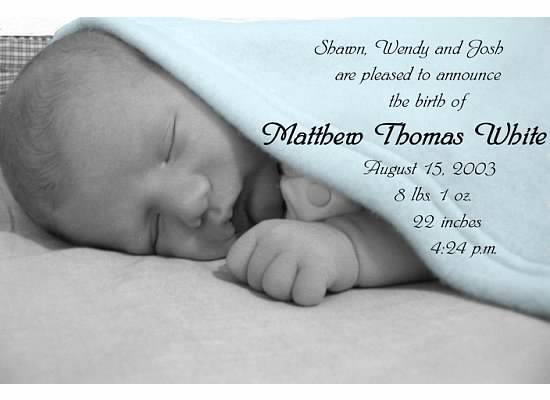 I found Matthew's birth announcement today. It's hard to believe that it's been nine years! Matthew was such a sweet baby and he's just as sweet today.

Matthew's entrance into the world was a scary one. Easily the scariest day of my life. Due to a freak prolapsed cord situation I was rushed into an emergency c-section. They had to knock me out completely and they made Shawn stay out in the hall so neither of us got to witness his birth. Of my three kids, Josh is the only birth we actually got to see! I didn't care though, I was just happy that he was there safe and we had a happy ending to a very scary day.

Matthew has been a happy, mellow kid since the day he was born. He may have given us trouble coming into the world but he sure hasn't given us much trouble since! He's very easy going and adaptable. Whatever we're doing, Matthew is just happy to be along for the ride. He's exactly like Shawn in that way and I admire that trait in both of them. They're not complainers.

Matthew is a very smart kid who taught himself to read at three and has always loved books. A few weeks ago when he was unusually tired during the day he admitted that he stayed up until 2am finishing one of the Harry Potter books. Had I known he was up that late he probably would have been in a bit of trouble, but I have to admit I was a little bit proud of the fact that he couldn't put the book down! I've stayed up many late nights myself finishing a book. It was hard to be too mad at him. I gave him a high five for finishing the book and told him never to stay up that late again, lol.

Matthew absolutely loves school and waits impatiently all summer for school to start back up. He's in the gifted program and loves to learn.

One of the presents we got Matthew for his birthday this year is a bit...different, but something I knew he'd be super excited about. We signed him up for hip hop dance classes! He saw a dance competition on TV recently and was mesmerized by hip hop dance. He's been saying that he wished he could learn how to dance like that. The other day I saw a Groupon for dance classes and knew it would be the perfect gift for him. It's a class just for boys ages 6-12 and it's really close to our house, so it will be perfect. It's just a six week class, but he's really excited about it! We have a dance Wii game and he's surprisingly good at it. It takes the rest of us forever to pick up the steps but he gets it pretty quickly. I'll be interested to see how he does in the dance class. It starts in a few weeks.

Matthew is a funny kid. The other day he told me that his two goals in life are never to break a bone and to never get dentures. I've been chuckling about that all week. I told him that those were good goals and to remember to be careful and remember to floss. :)

For our kids birthdays we let them pick their favorite meal for dinner. Yesterday I told Matthew that he could pick anything he wanted for tonight. I would make him anything he wanted or we could go out somewhere. He thought about it for a while and decided that he wanted to go to Burger King, lol. That would not have been my first choice, but he was in charge, so this evening we packed up and headed over to Burger King. :)

Now he's busy playing the Wii game that he got for his birthday. We don't normally let the kids play Wii on school nights but he's been waiting for this game for ages (Lego Batman 2) and I didn't have the heart to tell him that he had to wait until Saturday to play it. It's good to get a little spoiled on your birthday. :)

Matthew is a great kid and I'm proud to be his mom. I love to watch him learn and grow and I'm proud of the person he is becoming. It's always a little sad to watch your kids get older but I'm excited to see what is ahead for him in his life.

And I truly hope that he never breaks a bone and never needs to get dentures. :)
Posted by Wendy at 7:10 PM

Aaahh. Happy birthday Matthew!
Wendy I read your blog and u don't know me....but I feel like I know you. I started reading when u were on ur adoption journey. My oldest son is about to turn 9 in September. So I can relate to Matthew a lot. My son loved Harry potter too and finished the series last year. But he would also read late into the night...not till 2 am though;). But I can relate.
Love ur blog. And congrats on the weight loss!