I swore I wasn't going to talk about my nails for a few days. Has it been a few days? Close enough. :)

I debated whether or not to post my latest nail creation, because honestly, it's not super great. It's fine but the pattern didn't turn out as perfect as I hoped it would and I'm kind of a perfectionist about it.

The reason that I decided to post it anyway is because I'm so ridiculously crazy about the color that I have to talk about it! We went school shopping last night and I wandered past the nail polish and couldn't resist stopping to look. I'm always on the look out for unique colors. And then I saw this one and literally gasped. The polish is Sally Hansen Pacific Blue. I LOVE this color. I think everything in the world should be this color. I don't know what exactly it is that attracts me to it so much, but just looking at it makes me happy.

I put it on my nails today and fell in love. It's such a great blue and I thought it would look great with bright white flowers. It does but unfortunately the flowers ended up looking slightly smeary and not nearly as crisp as I hoped they would. (the glare from the window in the picture doesn't help. It's not a great picture.) It looks fine I guess, just not as awesome as I hoped it would. I also go the wild idea of putting a little dot of sparkly blue/green polish in the center of the flowers and that was kind of a failed experiment. I saw someone do it once and it looked cool. Not so much when I did it. Story of my life, actually. :)

I considered taking it all off and trying again, but eh, chances are I'm going to take it off in two days and try something else anyway. I'll keep it around for now. The blue is still so pretty to look at that I love it, smeary flowers and all. :) 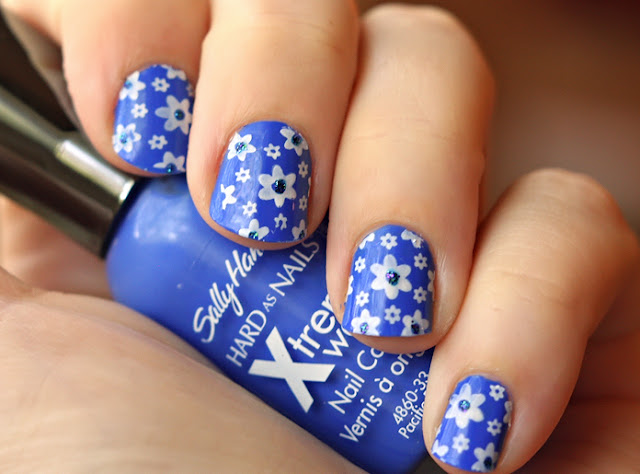 Hi Wendy , What nail art are you using? Could you please post picture.