Shawn and I escaped for a few hours today and ran some errands without the kids. Yay! :)

We got the car stereo installed that I bought him for his birthday and then we went the mall to shop for shoes and nail polish, two things that I'm sure were not super thrilling for Shawn (ok, super boring), but he's an awesome sport. I love shopping with him. He's patient even if I stand there and look at nail polish and try on shoes for an hour. He was on a new car stereo high and we did get the battery in his watch replaced while we were at mall, so it wasn't all for me! :)


I decided I needed new exercise shoes. The shoes I've been wearing for biking and the treadmill all summer aren't super fancy anyway and they have suddenly stopped fitting right and they're starting to give me blisters. I do have a pair of nice Nike running shoes that I bought a few years ago that I have tried really hard to love, but I hate them. They're super cushion-y, which I think is supposed to be a good thing, but they're just so much SHOE on my foot. I feel like my foot is encased in so much foam and...shoe.

I hate wearing shoes in general and I pretty much go barefoot whenever possible. I have been known to walk to the mailbox in the winter barefoot when there is snow on the ground. When I do wear shoes I like slip-ons that don't feel constricting. So really clunky running shoes don't work for me. I hate them and I can't do my daily treadmill workout in my Nikes.

I have been researching barefoot shoes recently. You know those new-fangled shoes that are shaped like feet with the toes? Have you seen those? There is a whole bunch of research out there on how it's better to run in bare feet. It's actually really interesting. Those shoes with the toes in them are called minimal or barefoot shoes. There isn't much to them and it's basically supposed to be as close as you can get to running in bare feet without actually being barefoot.


I actually didn't really want the shoes with the toes in them because, well, they're shoes with toes in them and I just can't get onboard with that. But fortunately there are all sorts of other shoes out there these days that mimic being barefoot that don't have the toe things in them.

I spent the afternoon researching minimal shoes the other day and decided on these:

They're Merrell shoes, the style is Pace. They got really great reviews everywhere I looked and seemed like they'd be just what I needed, so I went to Dillards and tried them on. Not only are they the most comfortable shoes ever to touch my feet, they were 50% off today! Bonus! They seriously feel amazing on my feet. The sole is made by the same people who make the shoes with the toes in them (Vibram), and they still feel like being barefoot, but they look like regular shoes without the toe cutouts that I wasn't so sure about. They're awesome, I'm completely in love with them. They hug my foot without feeling like my foot is encased in five pounds of foam and rubber. I put them on when I got home and ran laps around my kitchen, lol. I have happy feet.

Then while I was at it I saw these shoes and fell in love:

These are Ahnu brand shoes, I believe they come from the makers of Keen. The style name is Karma, in case you love them and want to search for them. I needed some new every day shoes that I could wear with jeans and I tried them on and they are like walking on a cloud. For someone who likes shoes that don't feel like shoes, these are amazing.

I usually don't love shopping for shoes because, well, I don't like shoes, but today was a successful shoe shopping adventure.

While we were waiting for Shawn's watch battery to be replaced and the car stereo to be installed we had some time to spare so we went to Sephora, which is the Holy Grail of all things girly. So much lip gloss and nail polish in one room. :)

I bought a brand of nail polish that I have never tried before. It's called Spartitual and I just could not pass up the interesting colors! I'm a sucker for nail polish in really weird colors. They had two glittery colors that change color in the light (called duochrome) that I just couldn't stop looking at. The first one is called Off The Grid and the second one is called Meditate On This. Off The Grid is an emerald green glitter that shows blue and even a little purple in different light. Meditate on This is a beautiful blue, or purple, depending on the light.  The two colors look amazing together and I knew that they would make a great gradient, so I bought them and decided to give gradients another try.

The result actually came out pretty cool, but all the glitter and color changing made it difficult to photograph. I did my best, but it looks way better in person. 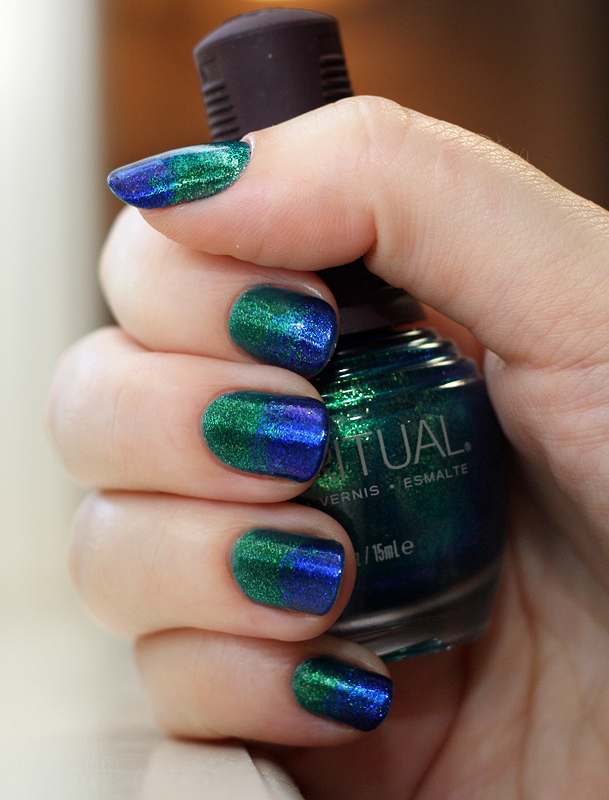 Oh, also, I broke the thumbnail on my other hand a couple of days ago. It was my first broken nail ever. I was super bummed about it. I filed it down and considered filing the rest of my nails down to match it, which I'm sure is probably what you're supposed to do, but I just couldn't bear to do it. It took me so long to grow out my nails that I can't file them down! So I have one sad thumb nail that doesn't match. First world problems.

OK, so now that I've shared my shoes and my nails, I'm going to go watch an episode of Criminal Minds with Shawn (we're finally in season six!) and then figure out what's for dinner. Typical Saturday at our house!

Hey, Wendy... I peeked on your blog to see how you were doing. (Did you get my email?)

I love all your nail polish posts. I'm going to show my 17-year-old daughter. She is really into nails. I've never seen those nail stamp contraptions before.

Dustin's brother doesn't wear shoes at all. He even went to the grocery store without wearing them. I was just waiting for him to get kicked out! He also runs outside barefoot. He does own those strange toe shoes for when he absolutely has to wear shoes though. He's a chiropractor and says going barefoot is best and he encourages his kids to be barefoot as much as possible. Interesting stuff.

Nicely presented information in this post, I prefer to read this kind of stuff. The quality of content is fine and the conclusion is good. Thanks for the post. http://www.bestcrossfitshoe.net/