I took a photo of myself today to compare it to a photo of me before I started my weight loss journey. I never took an official "before" photo so that I could do before and afters, mostly because I hated the before so much that I avoided having my picture taken as much as possible. Shawn took my picture by my bike for one of our Year of Adventure activities though, and it works pretty good as a before photo.

For the record, I super hate the "before" picture. In fact, looking at that photo was one of the things that started the whole weight loss thing. I was kind of shocked when I saw myself in that photo for the first time. Yikes. I cringe every time I look at it. The photo was taken on July 1st, which is within days of starting the diet and about two weeks or so after starting my daily bike rides.

As of today I've lost just under 16 pounds. No one has really mentioned the weight loss and I wasn't sure if it was really noticeable, so I took a photo tonight to compare it to the July photo.

I can definitely tell! It's noticeable, right? I definitely hate the second photo less than the first, anyway! I would say that I'm approximately halfway to my goal. Not quite, but pretty close. I've lost 16ish and I probably want to lose about 18ish more.

I've now been dieting for around 75 days. The progress has been somewhat slow, but seeing the difference in the photos is motivation to keep going. I feel better, I look better and I'm happier. I'm proud of me! :) 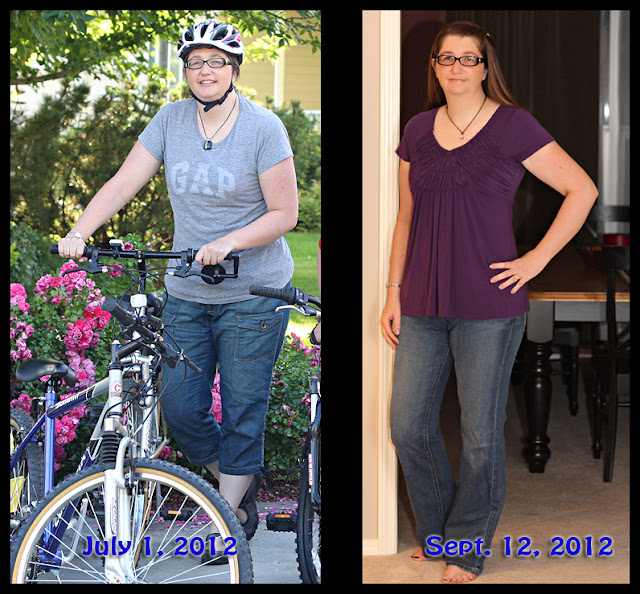 Not sure if I've ever commented before but it's totally noticeable - definitely in your face - great job!

I can totally tell a difference. You look great!

Wendy, the difference is very noticeable! Way to go! Your diet posts are inspiring to me...I need to get off this chair and go take a before picture of my own!