Someone commented that I should post photos of the redecorating projects so I can get some feedback and I think that's a good idea so here you go!

First of all, here is a photo of what our formal living room currently looks like so that you can get a good look at the current carpet. This picture is actually a few years old. The furniture and decor look exactly the same. The carpet looks worse. But as you can see, it's just a very, boring, light greyish color. Nothing interesting, but not terrible. I think it's kind of boring and if you saw it today you would agree that it's definitely showing wear. It's getting ugly. 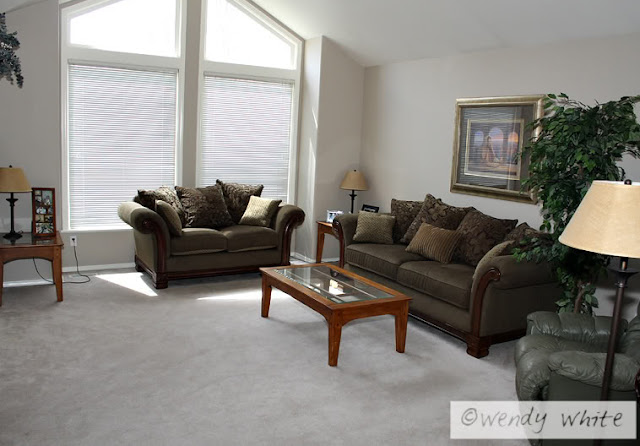 Before I start showing you photos of what I'm planning, let me just say that it's really hard to show accurate photos because the color might look different on your screen than it does on mine or in person. Things like carpet and paint color are really hard to gauge accurately on a computer screen. I'll do my best to show it anyway, but keep that in mind.

Ok, so here is the carpet board that I've been looking at obsessively for the past month and I made a beatiful arrow to direct your attention to the one I'm interested in. :) You can see the difference in color from the current carpet and the new carpet. The new carpet is definitely darker. The walls in most of the house are a taupey greyish brown color so I wanted carpet that had more greyish tones to it than the orangey gold tones that I kept seeing in most of the carpet samples I looked at. The carpet I'm interested in is basically a brown, but it's a bit on the greyish side. Not so gold. It's taupey. 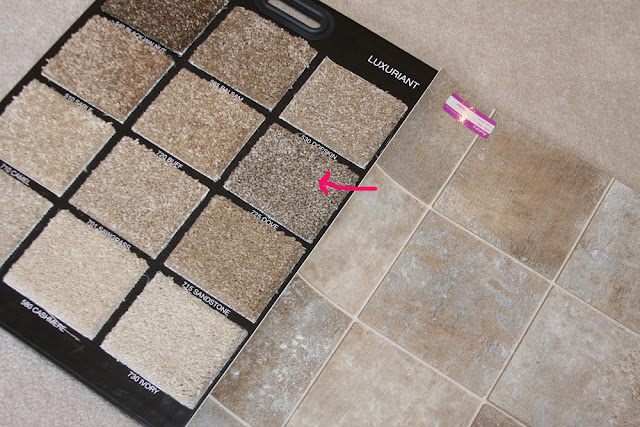 The vinyl sample next to it is the vinyl that will go in the kids bathroom.

Here is a photo I found online of the carpet: 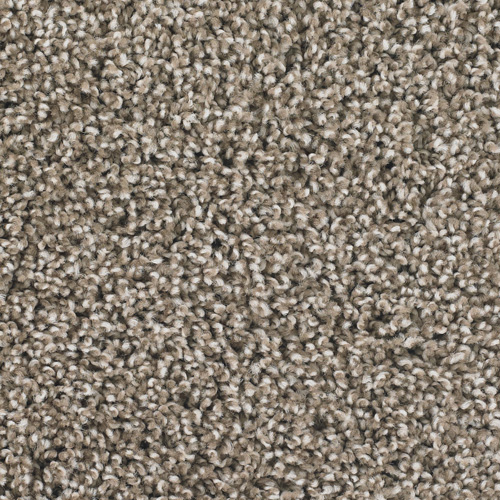 and here is a photo I found online of the vinyl: Again, those pictures may or may not accurately reflect the color. It's pretty close on my monitor but I don't know if it's accurate on yours. The vinyl has more blues and greys in it in person than it looks like in this photo. The counters in the kids bathroom are blue, so in person it actually looks really nice.

So the carpet is going to be a fairly drastic change. It's definitely going to be darker, but I want it to be darker. The carpet that is currently in there is too light for anyone raising children. Every single spot shows like a neon sign. I purposely looked for something a little darker with a twist of a second color in it because I think it will wear better and not show spots as easily. It's also a fairly low pile carpet because I wanted something that wasn't going to mat down and show traffic patterns so quickly. That is especially important to me on the stairs.

Ok, so that's the story of the carpet. Now on to Josh's bedroom.

Taking photos of bedrooms is tricky because it's hard to get the whole room in the shot. I wish I had a fisheye lens for my camera, but I don't. So the photos I did get aren't great and don't really show the whole room. His room is actually pretty big, but it's rectangular. Much longer than it is wide, so it's hard to capture in the photo without a specific type of lens. Also, his room is currently in the middle of renovation, so it looks terrible. He has already taken down most of the things off his wall in preparation for painting and everything is kind of in a state of transition. Also, we have painted some green spots on the wall to test out the paint colors we're considering. So you're going to have to ignore all of that. I know it looks terrible right now. Also, the cat. Whatever.

His walls are currently a light blue. When my kids were little I LOVED that color. Now I'm super tired of it. 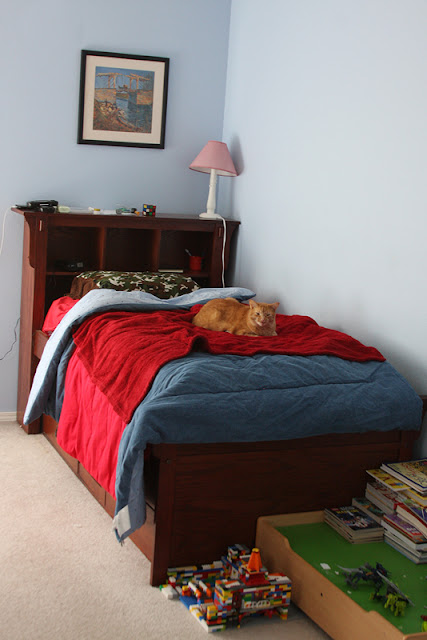 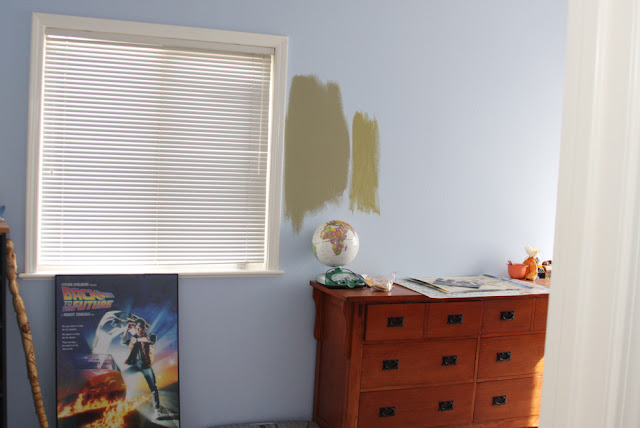 His old bedding is ugly and old. Here is the new bedding he has chosen (the photo is from the Pottery Barn website): 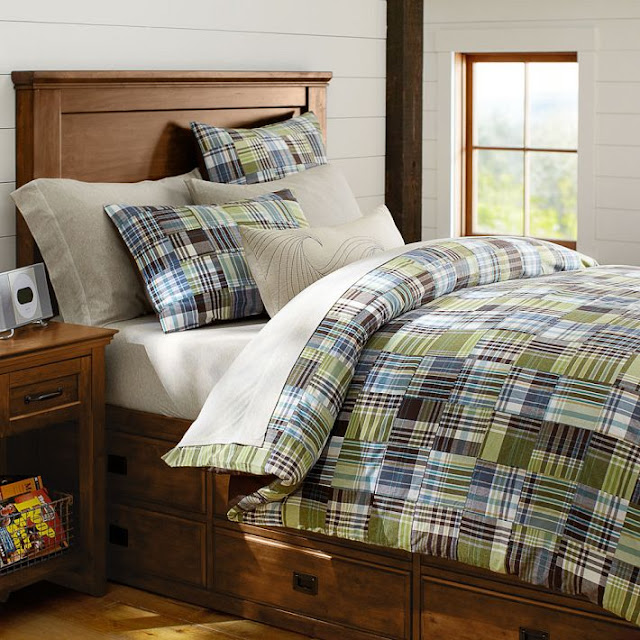 I love it, he did a great job picking it.

He wants the walls to be green. You can see that we have experimented with a few greens. I think he wants to go with the big one next to the window. That color is Valspar Mossy Bench. Here is a swatch I found online, but I think the actual color is a little more on the brown side than the swatch shows. Although the color painted next to it on his wall is super olivey yellow/green, which makes the other color look more brown than it actually is. It might look more green without that SUPER green color next to it. 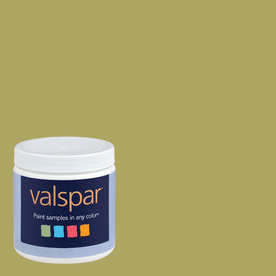 Then we're decorating with vintage film decor and we found some AWESOME things. We bought two movie posters and framed them, one of them is the Back To The Future poster you can see in one of those photos and the other one is this Star Wars poster: 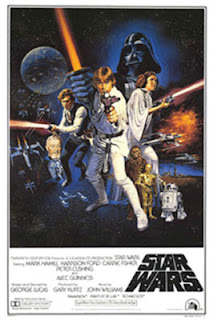 They look really cool framed and I'm excited to hang them after we paint. We also found some really cool metal vintage movie decor at Hobby Lobby. I didn't take photos of what we bought but it looks similar to this sort of thing, but not necessarily exactly: 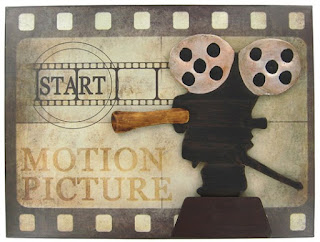 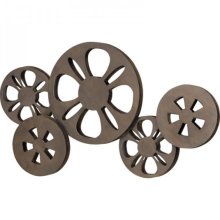 We bought several odds and ends and they're going to look really great when the room is done! I'm really excited to get that project finished. It's going to be fun, I just have to find a time to get to it in the next couple of weeks! I'll take photos when it's done.

Ok, so on to the dining room. So we have this formal dining room in our house that we NEVER eat in. Ever. I think two meals have been eaten in that room in the past 8 years. The kids do homework in there and that big cabinet that is supposed to be filled with fancy dishes and linens actually has art supplies in it. Lots of crayons and construction paper. I'm not fancy, lol. 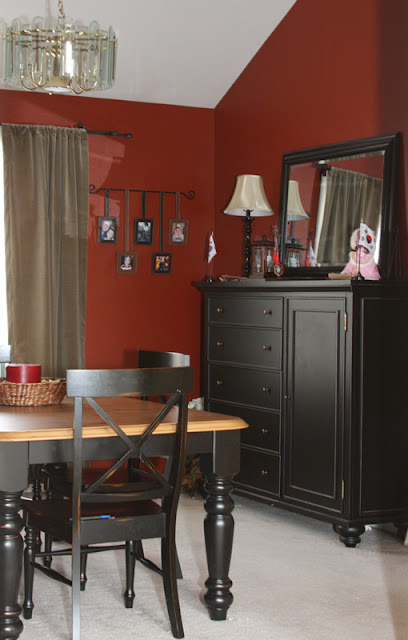 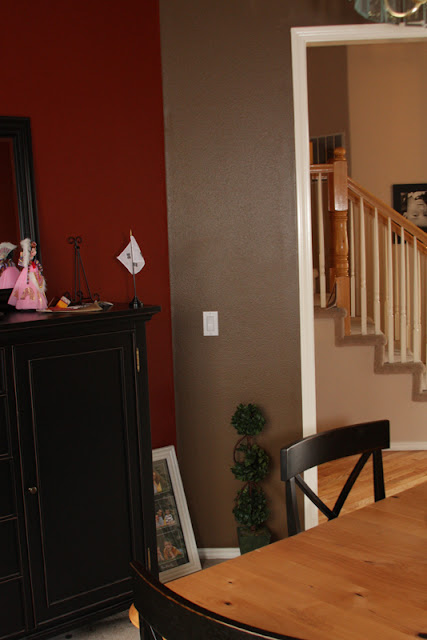 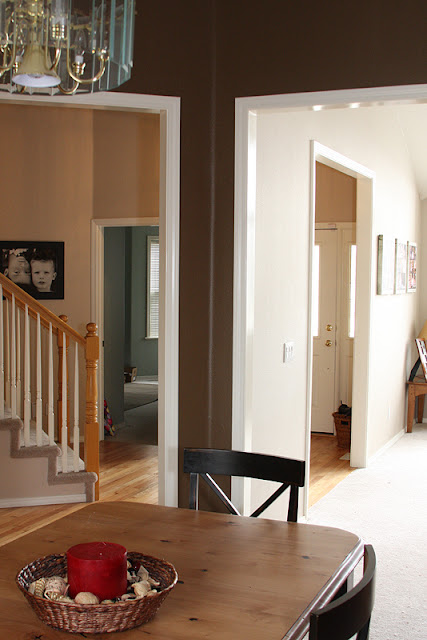 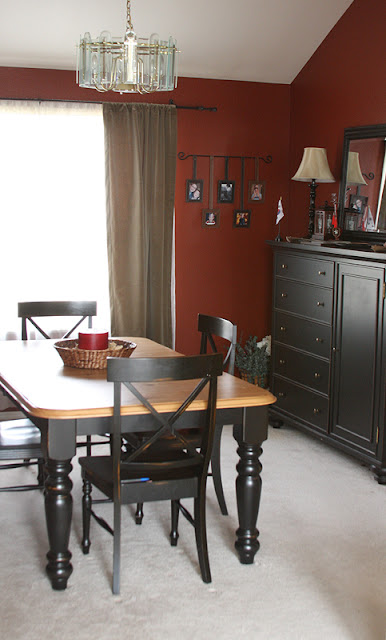 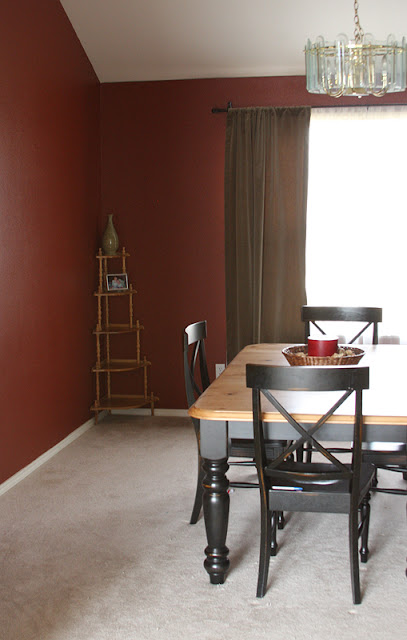 So, as you can see, it's red and brown. I sort of hate it. I kind of got talked into painting it red when we moved here because red was the thing. Eh. It's never really been so much my thing. It's fine, I guess. Formal dining rooms are supposed to be fancy. Again, I'm not fancy. So I've never really known what to do with that room exactly. It's always been kind of a work in progress. As you can see, one side of it is decorated and the other side really isn't. I don't go in there much and mostly I just ignore that room. I have always intended to do something with it, especially because it's near the front of the house and people see it often, but I'm not an amazing decorator and it mostly just sits there and wonders what it's purpose is, lol.

So with that said, I think I'm going to paint it green. It connects to the formal living room, which you saw in the first photo, and the furniture in there is green, so in my uncreative brain, I think the walls should be green to tie it together, right? I don't know, I just made that up.

I was at a friends house today and she just repainted her kitchen with an amazing green color. It's Kelly Moore Wood Moss. It looks absolutely gorgeous in her kitchen and I think that I might just be a copycat and use that color. I tried to find a paint swatch of it, and I'll share what I found, but I don't think the swatch is accurate. Not on my monitor, anyway. It's green with a bit of grey in it. The paint swatch on my monitor looks quite grey. It's not, it's green, and it's beautiful in person! 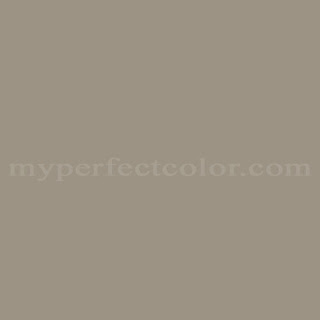 And there you have it! All my redecorating plans. I'm open to comments. Let me have it!
Posted by Wendy at 4:54 PM

Where did you find your dining room furniture, especially the cabinet? I really like them!

I love the PB bedding. Very versatile. I personally would go with a neutral wall to make the bedding & decor pop a bit, but you gotta please your kiddo. :)

My formal dining is a similar green called SW Leatherleaf. I like it, except it makes taking pictures in there very difficult due to the darker tone.

Good luck w all your redecorating!

We bought the furniture at a furniture store called RC Willey. I don't know if they have that store everywhere. Maybe just Idaho and Utah. The cabinet is actually supposed to be for a bedroom but I saw it when we were picking out the table and it matched so perfectly that we decided to get it. I have really liked it, it holds all of our art supplies nicely. :)

I loooove the colors! I can't wait to see the after pictures!! :)