First of all, Josh came home from school today and showed me this photo: 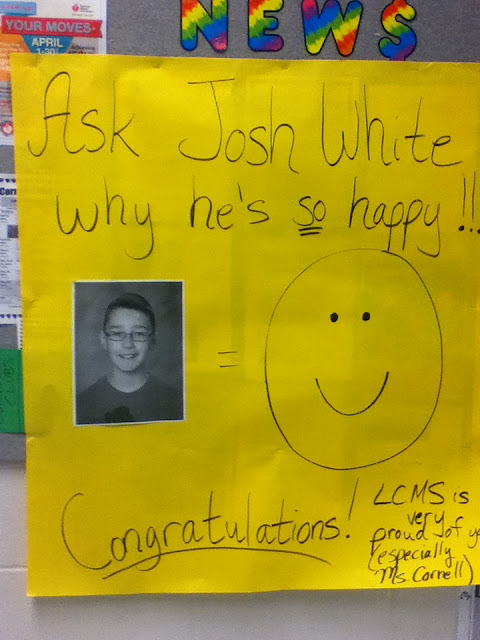 His filmmaking teacher hung it up in the hall this morning to congratulate him for winning the film festival. He said kids came up to him all day to ask him what the deal was with the sign, lol. Josh is kind of a quiet kid at school, so I think it was a good opportunity for him to come out out of his shell and speak up a little bit. Awesome.

So this morning I had my consultation with the periodontist to discuss my upcoming crown lengthening procedure.  Basically he's going to lower the gum line and bone around that tooth so the dentist can deal with the deep crack in my tooth and put a crown on it. It involves stitches and a six week recovery period before I can have the crown done. Ugh. The doctor was super nice and very experienced I feel like I'm in good hands but I am dreading the procedure like the plague. I have to have the procedure, wait a few weeks, go back to have the stitches removed, wait a few weeks, go back and have it checked, then go in to the regular dentist to have the initial crown work done on that tooth and the other tooth that needs to be crowned, wait a few weeks and then go back to the dentist to have the permanent crowns set. That's five appointments it's going to take me to get this thing taken care of. For someone with serious doctor anxiety, that's a lot.

They can't get me in for a few weeks, so at least I can put it off for a little while. My appointment isn't until later in May. That either gives me more time to avoid it or more time to stress out about it. I'm trying not to think about it.

And in more dental news, Clarissa had to have a cavity filled yesterday. There is always serious mom guilt when your child has to have a cavity filled. I feel like I failed her, which is silly because a cavity can happen to anyone. It wasn't a super big deal but they did have to give her gas and numb it with shots, which I was really anxious about. She did great though. The gas relaxed her enough that she didn't really even react to the shots much. She was fine, I was a nervous wreck, lol. She did fine until I got her home and she accidentally bit her lip, which was still numb. It bled a little bit, not a lot, it wasn't a big deal, but then her lip swelled up huge. The swelling has gone down a bit today but she still has a fat lip. Poor kid. It doesn't seem to hurt though.

In Matthew news, he just finished reading the Hobbit and has decided to go for the whole Lord of the Rings series. That's a big undertaking for a nine year old but he really wanted to give it try and so far he seems to like it! He's our Year of the Books champion for sure. He's putting the rest of us to shame. I get so excited seeing him carry a book around with him everywhere he goes. He has always liked to read but this year he has just really taken off with it. As someone who loves books, it's been really fun for me! I have a list a mile long of books I can't wait to introduce him to.

So that's what's going on with us these days. We're keeping busy and I'm trying not to think too much about my upcoming dental work. Let's hope the next few weeks pass slowly! :)
Posted by Wendy at 5:11 PM