In honor of our class reunion, a bunch of us changed our Facebook profiles to our senior picture. Here is mine: 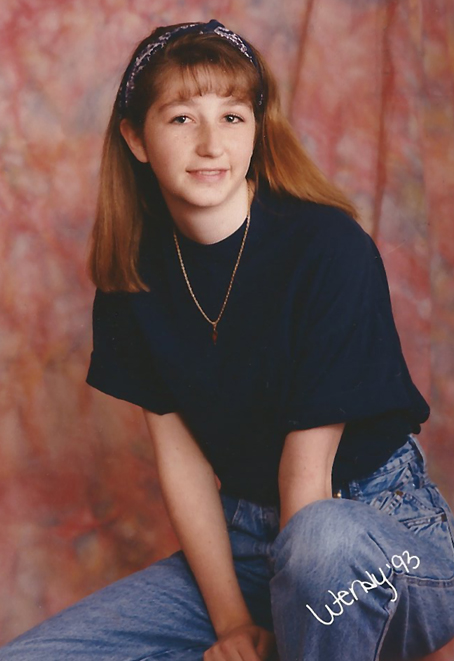 I look so young! Over the years you never really see yourself change that much. In my mind I think I still look pretty much the same as I always have. Then I take a good look at old photos like this one and realize that I've changed a lot more than I think I have!

I remember the day that photo was taken. I remember it like it just happened yesterday. Back then there was one fancy photographer in town and that's where practically everyone went to get their senior pictures taken. As a result we all had the same backgrounds and poses. I was going through some of my friends senior pictures the other day and was laughing that everyone was standing under the same arch with their arms folded or in front of the same fake brick wall. I bet it's nothing like that now. There are tons of choices when it comes to senior photos.

But anyway, this is my senior photo and I found it amusing to look at. That was the brief period in my life when I wore contacts instead of glasses. I have terrible eyesight and I've had glasses since the fourth grade. I only switched to contacts for a fairly brief period in my late teens. I have a lot of allergies and my eyes just don't really like contacts. A few times in my life I've tried to switch to contacts again and always switch back to glasses. They're easier. One of these days I'm going to get brave and get eye surgery but we all know what a baby I am about doctors, so it probably won't happen anytime soon.

This photo was also taken shortly after I straightened my hair and left my big hair days mostly behind forever. I have extremely thick and unruly hair. When I was a kid I had the worst hair ever and my mother was constantly trying to figure out what to do with it. We tried fighting the unruly waves and decided that maybe perms were the answer (tip of the day, perms are never the answer) and then I ended up looking like a poodle for quite some time. I had a lot of bad hairstyles over the years. My hair was a constant source of frustration and self esteem issues in my teens.

Then when I was a senior my mom came up with the brilliant idea to straighten my hair. It was basically a perm but with no curlers. It relaxed all the crazy waves I had been fighting for years and my hair was finally somewhat manageable. I have mostly worn it straight ever since, although it's still naturally wavy in all the wrong places and it takes a lot of work to keep it straight. The invention of the flat iron has made my life much easier.

Also, I was skinny back then. I didn't think I was and I was self conscious of my body like every teenage girl, but I'd kill to have that skinny body back. There wasn't an ounce of fat on my body back in those days. I never had weight issues until I was pregnant the first time. I gained 40 pounds when I was pregnant with Josh and, well, he only weighed 6lbs 9oz, lol. I've been fighting the rest of that weight ever since. That 18 year old Wendy should have appreciated her body more than she did.

But what I think of most when I look at that photo is how happy and naive I was back then. The photo actually makes me a little sad to look at because I know what was going on in my life at the time and I was completely oblivious to how much my life was about to change. I was having the time of my life back then. When this photo was taken I was in love for the first time, I was making big plans for my future and I thought I knew exactly what was ahead of me in life. I didn't know then that the next few years were going to be full of a lot of hard times. I got my heart broken, my dad died, the college experience that I had looked so forward to ended up being a disaster and I abruptly dropped out to move across the country to try to figure out my life and then came home and got my heart re-broken and struggled to find my path for a while.

I struggled after high school. I left high school with big plans and a solid view of my future and every one of those plans changed practically overnight and it took me a long time to come up with a new plan and to be OK with life turning out differently than I thought it would. I can't help but think of that when I look at my senior photo. I want to go back in time and find that 18 year old Wendy and warn her of a few things, but of course that impossible and I feel bad that the girl in that picture had no idea what was ahead of her in the next few years.

But of course, life did turn out fine in the end. I struggled, I spent a few years figuring out who I was and where I was going and then miraculously Shawn showed up and made me smile again. That girl in the photo didn't know of the struggles that were ahead of her but she didn't know the amazing things that were in her future either. She didn't know that she would marry her best friend and have three awesome kids. She had no idea that someday she'd travel halfway around the world and come home with a precious daughter. She had no idea that she would have two amazing boys who would be so smart and funny and amazing.

So maybe life didn't turn out exactly the way the girl in that photo thought it was going to back then but it turned out awesome in the end anyway. I might not fit into the jeans in that photo anymore, and I might have had some bumps along the way, but 20 years later I'm still pushing through, content with where life is taking me and looking forward to new adventures in the years to come.
Posted by Wendy at 12:14 PM