I promised that I would do some photos of our basement project, so here I am with photos!

First, just let me say that I kind of hate taking house photos because it's so tricky to get far enough back to get good photos of the whole room. Without a fisheye lens it's kind of impossible, and I don't have a fisheye lens. So I always have to work really hard to get decent house photos and today I sort of didn't feel like working that hard and the photos are sort of crappy. It will give you an idea of what we're doing down there though and once the project is done I'll work a little harder and take some better photos. :)

So forgive the crappy photos and forgive the fact that my basement looks like crap right now. It did used to have furniture in it, but we gave it away over the weekend and we've started going through the toys and things that need to be moved out, so right now it's just a junky mess. Pretty much 100% of what is down there is going out. It's all either being donated or moved somewhere else. The only thing that is currently in there that is still going to be there when the room is done is Clarissa's play kitchen. Pretty much everything is going to find a new home. It's mostly old toys that our kids have grown out of and junk that needs to be repurposed somewhere else.

So here are the stairs as seen from the main floor. This is next to our kitchen and family room. 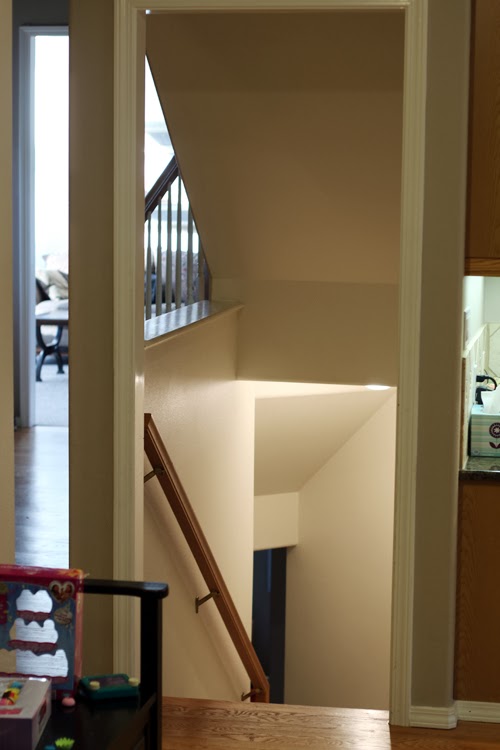 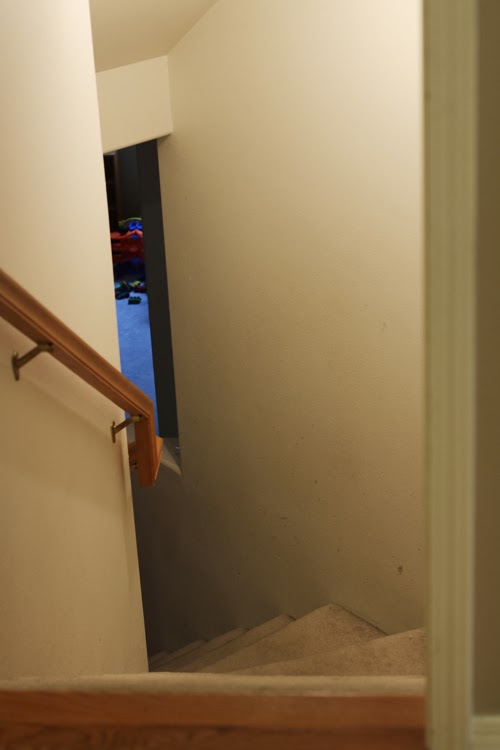 When we moved here, every wall in the house was white. I can't live with white walls, so we had the majority of the house painted before we even moved in. The basement was the one area we never had painted. Because it was always my "later project" I've just kind of ignored it for the past nine years, thinking I would eventually get to it. I did paint the playroom area with some friends a few years ago and we painted the guest room when we did that project recently, but the stairwell, the basement hallway and the bathroom are still white. Everything is being painted in a few weeks. It needs it desperately. We're also repainting the playroom. I'm not sure what color it's going to be yet, but it won't be yellow.

Here is what it looks like at the bottom of the stairs. That room is what we're re-doing, 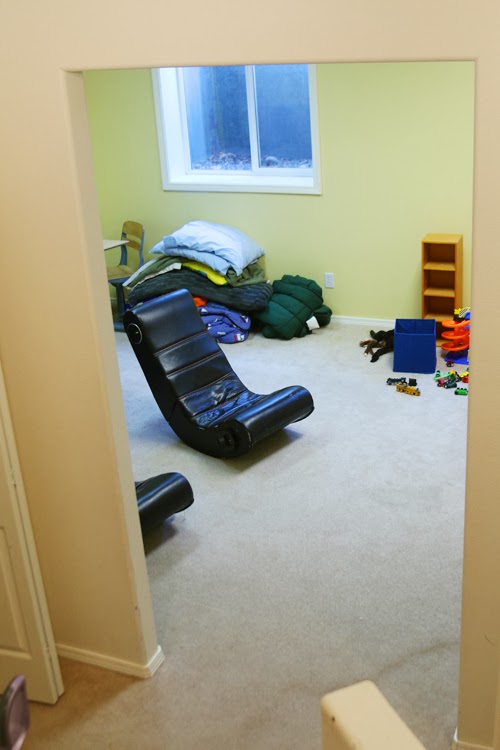 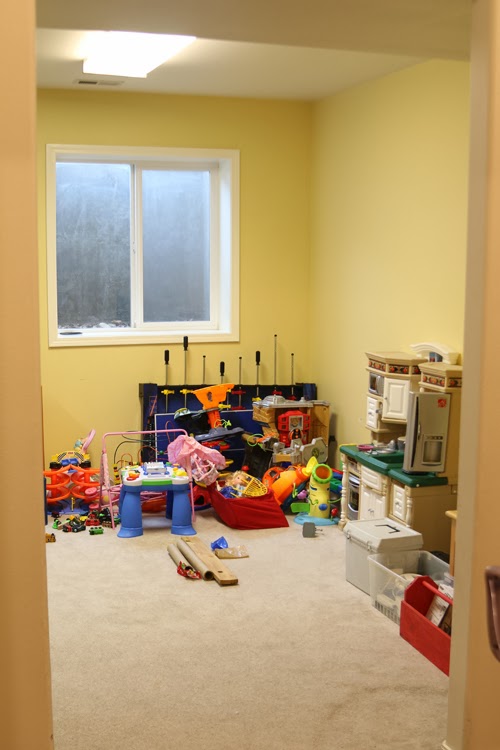 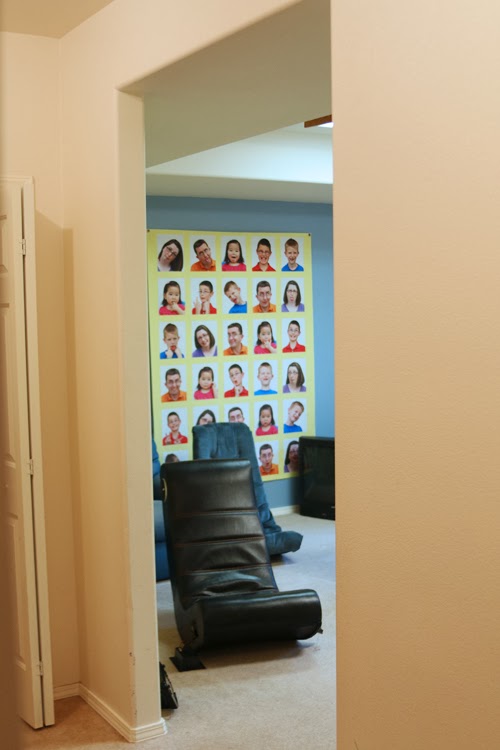 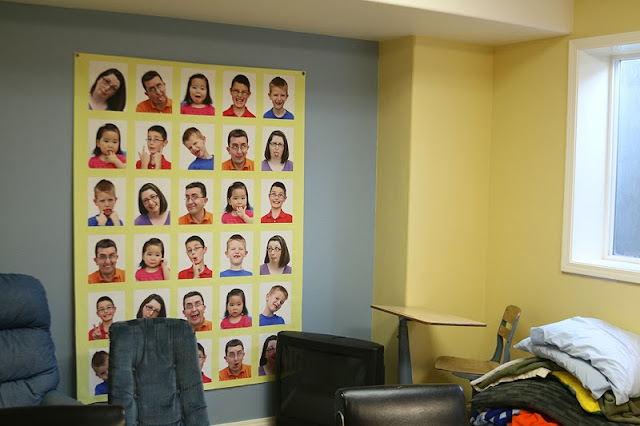 It looks terrible, I know. It has just never been a place where anyone has wanted to hang out and I have put very little effort into it over the years. This project will change that.

So here's what we're doing. The right side of the room where Clarissa's play kitchen and all the toys are currently piled up up is going to have a big leather sectional. It's going to fill that whole side of the room and wrap under that window. We ordered it on Saturday. It's big and brown and smooshy and it has three recliners in it, so we can all snuggle up for movie nights.

That recessed blue wall where those silly family photos are is the opposite side of the room from where the sectional will be and that's where the TV is going to go. We're still trying to decide exactly what we're going to do, but there will be a 60ish inch TV there.  A 60 inch TV would be almost exactly as wide as that silly family picture and will go down the length of about the first three rows of photos. We haven't decided if we're going to mount it to the wall (which we dread, because we've mounted TV's before and it's a gigantic pain) or we're going to find some sort of cabinet to sit it on. It needs something under it to store the Wii and the DVD player and all of that.

That recessed wall space is kind of awkward. It seems like it would be awesome to have custom cabinets built into it, but it's only 13 inches deep. That means that nothing really fits in it. Built ins would be too shallow to be useful, and even a media cabinet is going to stick out. I'm kicking around the idea of something like this: 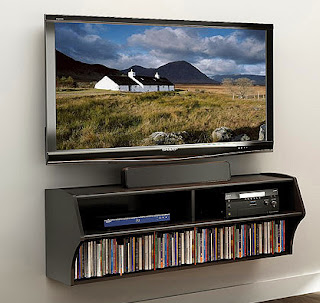 The other room that is going to be painted down there is the bathroom. 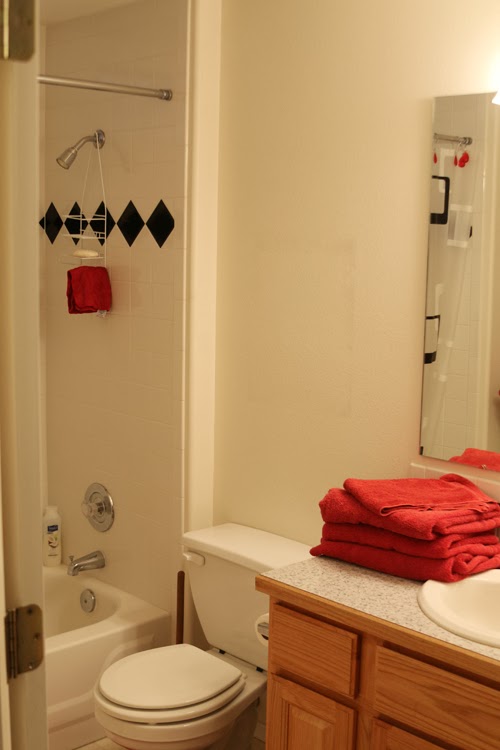 It's not a fancy bathroom. I think I'm going to paint it light grey. That will work with the red and black we already have going on in there. We're also going to put new flooring down when we recarpet. You can't see the flooring in this photo but it's really outdated vinyl. We're going to pick out some nicer vinyl, something that looks like stone or something. They have some cool stuff these days that isn't super expensive. That bathroom doesn't get used a ton, so I'm not willing to put a ton of money into it, but new flooring and paint will be an inexpensive fix that will make a huge difference.

So we'll be recarpeting the whole basement, from the stairs to the guest room, plus new paint in the stairway, the hallway, the new TV room and the bathroom, new furniture and new TV in the new TV room and new bathroom flooring, all before mid December. Whew! It's going to make a gigantic difference down there. I honestly never thought it would have taken us this long to finish the basement projects. When we moved here we thought we'd wait a couple of years or something, but other projects always got in the way. Because it's the basement it's easy to ignore it and deal with it another day, but too many days have gone by and now it's really past due for some TLC.

Having that TV room done is going to be really great for the kids. I'm looking forward to them having friends over to hang out down there and it will be fun for family movie nights and family game tournaments. It will also move all the noise and chaos down to the basement instead of the main floor family room and that will make my life easier! I can keep the main floor clean and organized easier if all the kids are having their fun in the basement.

And because I promised someone in the comments the other day, here are photos of the guest room we re-did.

If you want the truth, the guest room project is only about 90% done, which is why I never posted photos. We got the painting done, which made a HUGE difference, and we got new bedding, put in a little fireplace and TV on the wall, which we've loved, but I never finished decorating. I got two night stands that needed to be assembled and painted. Shawn opened the first box and found out that it literally needed to be assembled from scratch, lol. He dumped the box out and it was literally just a bunch of wood pieces, nails and wood glue. It took him forever to get one done and he has never gotten around to putting the other one together. I'm going to paint them white to match the bed when he assembles the other one. We just have never gotten around to finishing the project. I also never found the perfect wall decor for the room. I need something above the bed. I can't decide if I just want to do something in vinyl up there or buy a big picture or a grouping or smaller pictures, or what. I keep thinking I'll know it when I see it and so far I haven't seen it. Also, it needs new curtains. I'm terrible at accessorizing. I wish I could afford an interior decorator to just come in and tell me what to do, go buy it for me and stick it up there. When it's left to me I sometimes put it off forever.

Anyway, here are some not so great photos. When we finish the TV room project next month maybe I'll spend some more time and take good photos of everything. 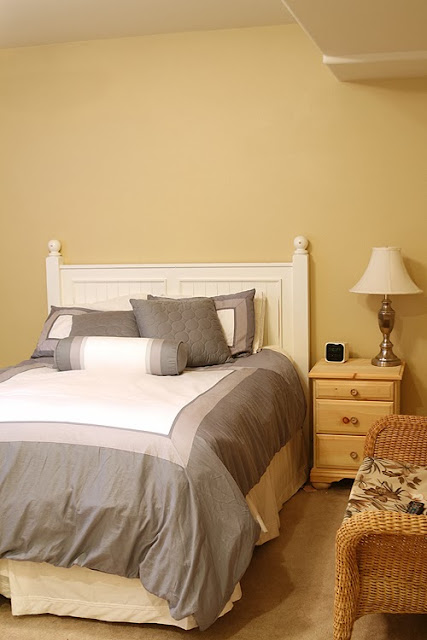 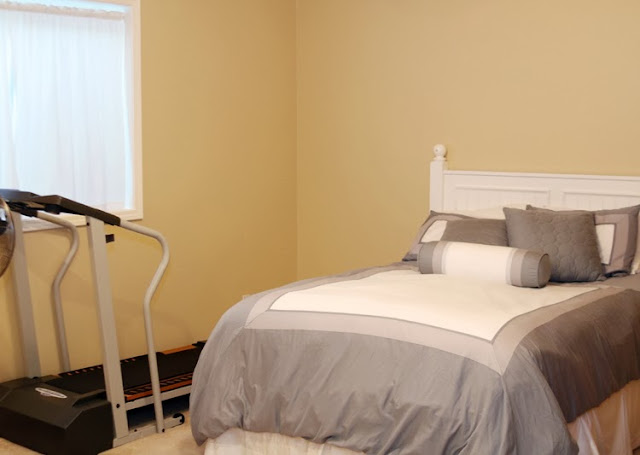 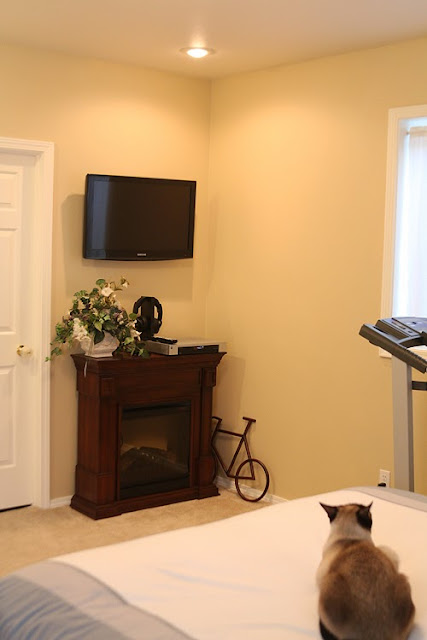 I did find a big picture of a bike to go on one wall though! Because it's a combination guest room and exercise room (you can see the beloved treadmill in there!) I wanted something that tied that together. My bike made me happy last summer. That room needed a big bike on the wall. I also have a metal bike that you can see sitting on the floor by the fireplace. I literally just need to hang that on the wall. It's still sitting there. Lame. :) 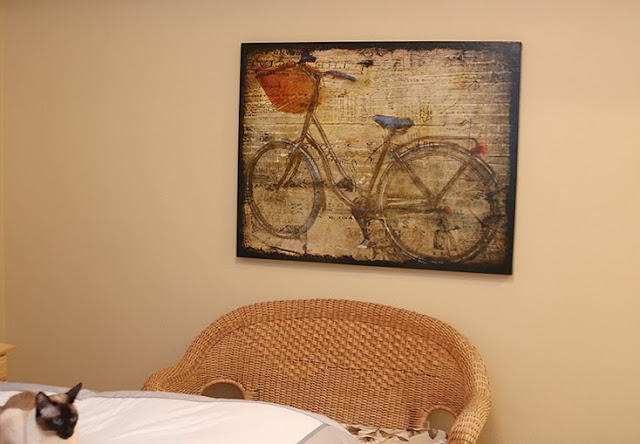 I wish I had before photos of that room, because it might not look that amazing now, but compared to how NOT amazing it was before, it's pretty amazing, lol. We have enjoyed it.

So there you go, some before photos of the soon to be TV room, and some sort of after photos of the guest room. Anyone want to come over and build a night stand? :)
Posted by Wendy at 11:48 AM