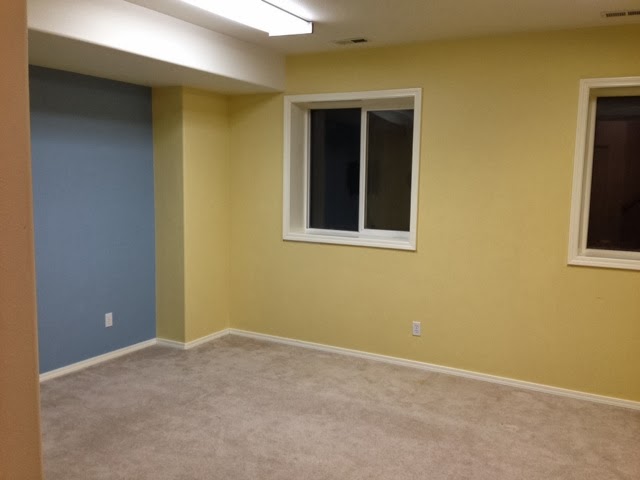 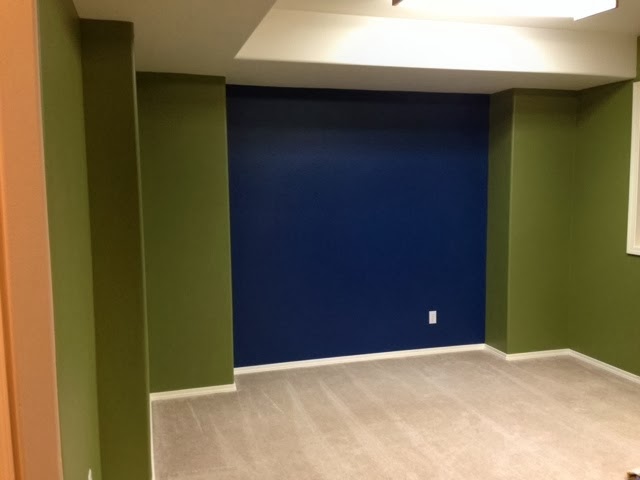 Well, it's definitely green! They got everything done and did a great job. I'm still slightly panicky about the green but I'm getting used to it. On my laptop it actually looks a little brighter in the photo than it actually is in person, so it may not be totally accurate on your monitor. The blue looks more navy in person. I'll get better photos with my good camera later.

It's going to look a lot better when the new carpet is in and we get it furnished. Right now it's just an empty room with a lot of green. Once there is stuff on the wall and furniture to break it up it will all go together.

What I do know is that my boys are going to LOVE it. They don't know what color it is but Josh keeps saying he's hoping it's green. It is definitely green, lol. It's a teenage boy room and those are definitely teenage boy colors.

I love the blue grey in the bathroom. It's a great color. The hallway and stairs are just a subtle beige but it looks way better than the beat up white walls that were there before. The stairwell especially was in desperate need of a paint job. It looks so much better now.

We're keeping the whole thing a secret from the boys. No one is allowed down there until it's done. They know basically what we're doing but they won't get to see it until Christmas morning. I'm not convinced we'll be able to keep it from them until Christmas, but we're going to try!

I'm going to get out my real camera and take good pictures of everything when the whole thing is done. We're still at phase one. It's going to look a million times better when the flooring is done next week and even better when it's furnished, so I'm going to wait to post a lot of photos until then.

So there you have it. It's definitely green! Eek!
Posted by Wendy at 7:50 PM