I've clearly been a blog slacker lately. I was debating doing NaBloPoMo (National Blog Posting Month) again this year and writing every day for 30 days but decided not to. November is a crappy month for me to write every day. I think I'm going to do it but pick a different month.

Anyone who knows me well knows that I kind of hate November. The sun goes away, which starts my winter blah's and Thanksgiving is coming up, which makes me all mopey. Once again I would love to just skip Thanksgiving completely. It's just going to be us at home and my kids don't really like turkey all that much, so it's kind of a non-holiday around here. In my mind, Thanksgiving is supposed to be a big holiday with lots of extended family and cousins running around and everyone sitting down together to a big meal. We don't really have that and it makes me a bit mopey and homesick for a family that doesn't currently exsist in the way that I remember it. it will just be us at home that day and as much as I keep telling myself to just make out own traditions and do it our own way, I struggle with it.

This year I decided to ask the kids what meal they do get the most excited about and the family consensus seems to be Korean bulgogi, so I think we're having a Korean feast for Thanksgiving. We'll eat Korean food and have a Wii tournament. Maybe that will be the new White family Thanksgiving tradition. And maybe I will love it.

Other than my yearly Thanksgiving angst, things are going well around here. Clarissa is on track break so I've enjoyed having her home all month. Then we had a big snow storm, which is rare for Boise, and they closed school for a day, so the boys got an unexpected three day weekend, which they were really excited about! The snow is finally starting to melt, but it was a mess here for several days. I grew up in an area that gets a lot of snow, so I used to be a really good snow driver, but Boise gets so little snow that I'm out of practice, so driving in the snow for a few days was a little scary. They don't plow the roads here very quickly, or at all in some places, so it gets a little tricky to get around in the snow. But we all survived and in the past couple of days it has started to warm back up and things are melting off. Even when we do get snow here it doesn't usually last very long.

One fun thing that has happened recently was that last night Matthew has his first piano recital! The teacher he had over the summer isn't around anymore so we had to find him someone new. I found a lady who lives pretty close to us who is an amazing piano teacher. He's only had two lessons with her, but she's really great and I feel confident that this is who he needs to teach him. He is chomping at the bit to learn and she's really experienced and has been great with him.

When he went for his first lesson a couple of weeks ago she informed him that they were just about to have their winter recital. He didn't have anything prepared and she said that he didn't have to participate since he was just starting, but he really wanted to perform so he decided to do a piece he had worked on with his previous teacher.

So last night he got all dressed up and we took him over to the recital. She rents out a room at a music store for recitals and it's a really nice place. They get to perform on an extremely expensive, fancy grand piano, which is really fun. And they have a camera aimed at the keys that is displayed on a TV screen behind them so you can watch them play, which is pretty cool.

Matthew was pretty nervous but when it was over he said he wished that they did a recital every month! I think he liked being up there performing.

I took video of his performance!

I also took a photo of him when it was over. He looks so grown up! 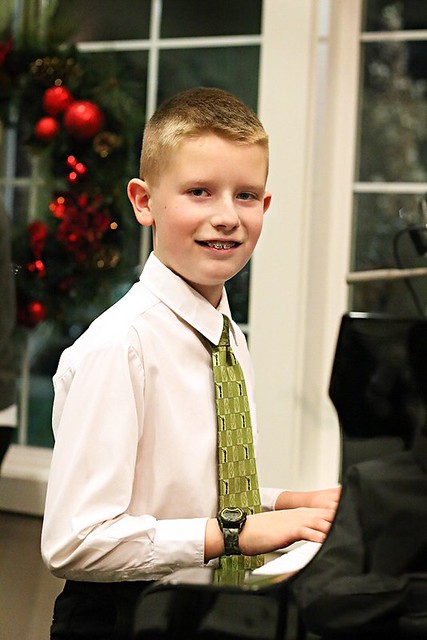 Oh, and here's something fun that I don't know if I mentioned! (Maybe I already mentioned this. If I did I'm sorry for repeating myself!) He is in choir at the middle school and they're working on a really pretty song for an upcoming choir performance. Matthew really loves the song so he came home one day and started playing it by ear. I thought it sounded great so I got him the sheet music so he could really learn it. He mentioned to his teacher that he was learning it and his choir teacher told him that if he can master it by the time they do their performance, he can accompany the choir for that song!

He's literally had three months of piano lessons and he's going to accompany a choir. I'm ridiculously proud of him! He's still working on the song but I'm confident that he'll have it down in time. It's not for a couple of months.

And speaking of Matthew, I have something fun coming up on my blog. He had to write a personal narrative for an assignment in his gifted program and he chose to write about the day we came home from Korea with Clarissa. I read his rough draft and absolutely loved it, so when he finishes it I'm going to let him be a guest poster on my blog and share the story.

And then Josh heard that Matthew was going to be a guest poster and he asked if he could write something on my blog too, so coming soon I'm going to have a post from both of them. I kind of love that idea. This blog is kind of a family journal, so it will be fun to hear from the kids. So look for that coming up in the next couple of weeks.

So that's pretty much it for today. I'm going to be late for church if I don't put the computer down and go get dressed, so look for guest posters coming soon! :)
Posted by Wendy at 12:24 PM 2 comments: