Well, today was officially the coolest day ever! It was monkey day!!

So this was this big thing I planned weeks before we came on this trip and I've been impatiently waiting to the day to arrive. It did not dissapoint!

The place we went to is not a well known tourist spot. It's in the middle of nowhere in the jungle. The tour scheduler people at the resort had never heard of it when we asked. So I was a little nervous about that because you have to find your own transportation, and I'm not kidding when I say that it's actually in the middle of the jungle!

So my plan was to make friends with a bellhop, because they always know what's up and they hang out at the front of the resort and work with transportation. They know the cabs. So our new friend Marco the bellhop hooked us up. :) He had never heard of the monkey place but we showed him where it was on the map and he said that he'd take care of it.

So this morning we met Marco in the lobby and he had a cab ready for us, and it was someone who did know the monkey place and had driven out there before. Whew.

I was really worried about driving into the jungle with a stranger, but they're super careful at this resort. There is a checkpoint you have to stop at if you leave the property and they write down who you are, where you're going and who you're going with. We have to wear an ID bracelet all week at the resort and they can track us with the number on the bracelet. So when we left the resort, they knew who was taking us and where he was taking us. That made me feel less nervous.

So it turns out it's a good thing the guy knew where he was going. It was about an hour drive from the resort and the last 15 minutes or so of the drive was on a really bumpy dirt road into the jungle. Like, complete middle of nowhere, not by a town, dirt road jungle.

But then we made it to the monkey place and it was AMAZING. Amazing doesn't even begin to explain this place. It's a husband and wife who run it. They have heavy European accents, I'm not sure where they're from, but years ago they were in Mexico and someine was trying to sell a sick baby monkey. They were horrified by the condition of the monkey, so they took it and nursed it back to health. Eventually that led to taking in another injured monkey, and then another and now they run an amazing monkey sanctuary in the jungle with probably fifty monkeys at least. They live there with the monkeys and the place is awesome. The monkeys have huge cages to swing around in. It's clean and nice and amazing. You can tell that the monkeys are extremely well taken care of.

They don't do a lot of tours because they don't want to stress out the monkeys. The only reason they do tours at all is to raise money to keep the place running, and as they told us, the monkeys aren't entertainment for us, we're there to entertain the monkeys, lol. Sometimes the monkeys enjoy the company.

So it was a small group and they give you all the rules and do's and don'ts so everyone is safe, and they only let you interact with the gentlest female monkeys, not the males, who tend to be more aggressive.

And then, the only part that was a bummer for me, was that they made us empty our pockets and take off our glasses. Monkeys tend to steal things, lol. That means you can't take in anything stealable. I am really blind without my glasses, so going in with no glasses was a bummer.

But anyway, they took us into a big monkey cage and we sat on the floor and the monkeys came over to us. They gave us treats to feed them, so the monkeys quickly examined everyone's hands to see what we were holding and we handed over the treats.

And then we basically just sat in the monkey cage for an hour and let monkeys use us a climbing toys! Sometimes they would come over and sit in our laps and wrap their long arms around our necks and snuggle. They all loved Shawn for some reason and kept coming over to sit on his shoulders. I was fascinated by their long tails, which they would wrap around our legs when they sat on us. Their tails are so strong!

It was amazing. Simply amazing. I teared up a bit the first time one snuggled with me. What beautiful, incredible  animals. I could honestly have stayed there with them all day.

But after about an hour, they were tired of us and we were out of monkey treats and they started to wander off to take a nap and it was time to go. I was sad to leave.

The cool thing is that the guy who runs the place collected everyone's cameras at the beginning and he did all the picture taking while we played. He walked around and took a ton of photos with all the cameras, so that we could enjoy the monkeys without being distracted by picture taking. So we got some fun pictures, although I hate that my glasses aren't on because I don't look like me without me glasses. But still, I'm happy for the photos to remind me of what an amazing experience it was. I don't know how anything could top it in this trip, and that's saying a lot, because we're having an amazing vacation!

This whole trip has been a magical experience. The place we're staying is super fancy. Our room is beautiful, right on the beach. The resort is gigantic. So big that it has three lobbies and there is a shuttle bus to get you from one end to the other. So there is a ton to do here. A ton of pools and restaurants and activities. It's an all inclusive resort, so the food is included and there is food everywhere! Buffets, grills by the pool, sit down restaurants, all sorts of things. There is an outdoor grill station near our room that we discovered yesterday and at dinner they grill chicken and steak and it's the best steak we've ever had. We ate there last night and again tonight. SO good! There are little ice cream shops and snack bars and it's weird to just walk in and order something and walk out without paying. We had chocolate crepes yesterday and amazing caramel ice cream this afternoon. My clothes aren't going to fit by the time we go home.

Tomorrow we don't have anything planned, so we might do some shopping or visit another resort. This resort has a few sister resorts down the shore and we can use any of them. So we can catch a shuttle bus and try out a different beach.

So yeah, this has pretty much been the greatest vacwtion of my life. We don't really take vacations like this, so it has been a totally new experience.

On Saturday we're taking a little trip to visit some Mayan ruins and then in the evening we're actually going to an REO Speedwagon concert! They just happen to be at the resort this week and they gave us free tickets. Cool!

We've talked to the kids a few times and they're doing great. I was worried that Clarissa would have a hard time, but she seems to be having a great time at her friends house. I'm glad, that makes it easier to enjoy myself here, knowing they're having a good time too.

So now we're off to watch a movie and end out the day. I hate to go to bed at night here because it means one more day of the vacation is over. Sad!! I hope the next few days pass slowly. I'm not ready to go home yet! :) 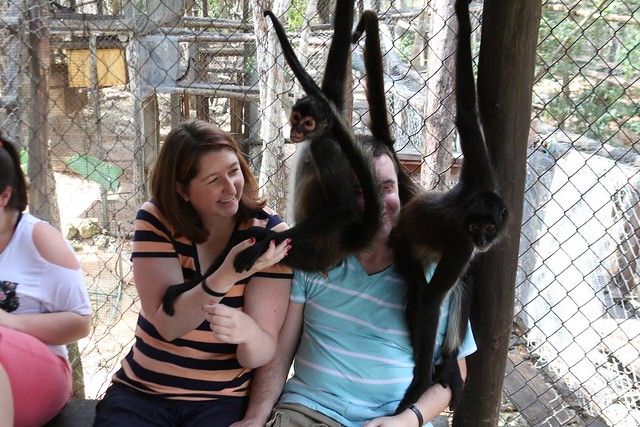 The resort you are staying at is awesome. I recognized it right away from your pictures..... we has a fabulous time! Be sure and try and hit the brazilian steakhouse. food is to die for !!! Enjoy your last few days