Well, the day has officially arrived. I sent the boys off to school for their first day this morning (Clarissa has already been in school for a couple of weeks) and I am officially home alone. I know I was sort of already home alone for part of the day last year. Clarissa was in kindergarten in the mornings last year, so I had my mornings free. But this is officially the first day I have all three kids in full time school. After 15 years of kids at home during the day, this is the first day of the new chapter in my life.

I sort of thought I would be sad about it. I'm ridiculously nostalgic about everything, especially when it comes to my kids growing up, and I thought closing that chapter would be hard after all these years. And it is a little bittersweet. But I think I'm ready for this change. I'm kind of excited to see what happens now. Knowing that I'm going into this new chapter in my life with a purpose and a plan has made this adjustment much easier. School doesn't start for me until September, so I still have a few weeks, but I'm looking forward to it! Lots of changes around here lately!

The kids seemed excited for school. Clarissa is on a different schedule than the boys, so she has already been going for a few weeks and loves it. She's figuring out how to maneuver the cafeteria at lunch time, since this is her first year eating lunch at school, and she's making new friends and seems to be enjoying the whole experience.

Matthew starts 7th grade today. Remember last year when all three of my kids were moving up to new schools? This year has been waaay easier with everyone going back to the schools they were at last year. It was fun taking Matthew to registration this year and watching him walk into the middle school with confidence, knowing the teachers, knowing the school layout, knowing how to use a locker. Last year there was a lot of nervousness with all three kids trying to figure out new environments, but this year it was smooth sailing. Matthew loves middle school and will do great.

Josh starts 10th grade today. Although, I feel bad for him because he just spent his summer doing summer school, so he never really got a summer break. He took four classes this summer. He quickly realized after they started that he bit off more than he could chew. Because of the college prep program he's in, is suggested that they take a class or two over the summer to stay ahead, but he insisted on four. I'm pretty sure he was the only kid at the school who took that many. And it pretty much kicked his behind all summer. He has worked really hard to keep up with it all. He had his finals last week. He ended the summer with straight A's, which he's really proud of, because it was harder than he thought it was going to be.

So he finished his finals last Thursday, and on Friday and over the weekend he read and annotated Farenheight 451, which was summer homework for his upcoming English class, and today he went back to school with basically no break. And I'm pretty sure that he has a test today on the book he just read. I don't know how that kid keeps up,  but I'm proud of him. The good news for him is that taking classes over the summer freed up his schedule a bit and he was able to fit in a few fun classes that he's really excited about. He's on the yearbook staff this year, which he's really looking forward to, and he's also doing concert choir. Having some fun classes in his schedule breaks up the tough academic program a bit and I think he'll really enjoy that.

Here are our annual first day of school photos! It's amazing to me how grown up they all look! Also, be sure to notice Clarissa's hair! For the first time in her whole life she got a real haircut! We have gotten it trimmed a few times, but this time we really cut it. She decided she wanted it shorter, so we had five inches cut off. It's much easier to manage at this length.

And now I'm going to enjoy some peace and quiet for a while and then work on some organizing projects that I've been putting off, now that I have the time to do them. I'm home alone all day! It's weird! 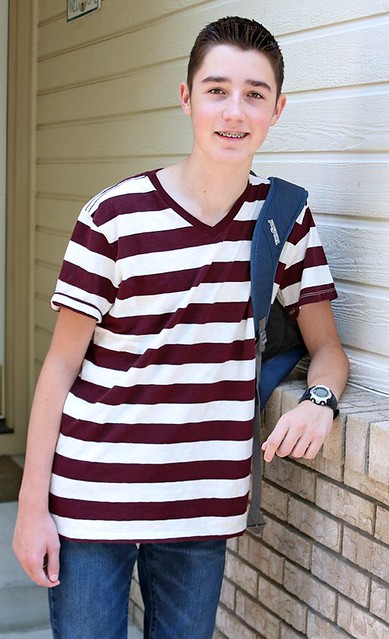 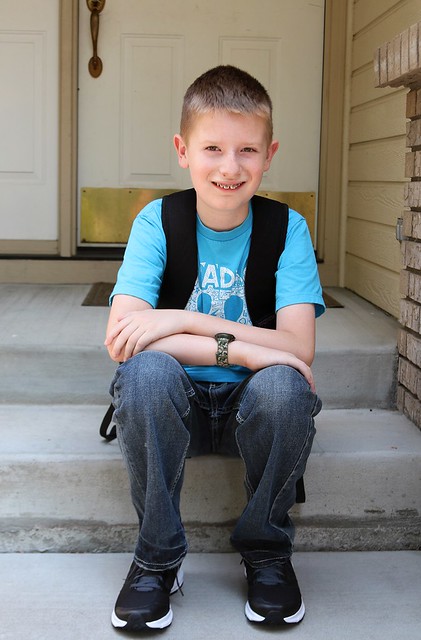 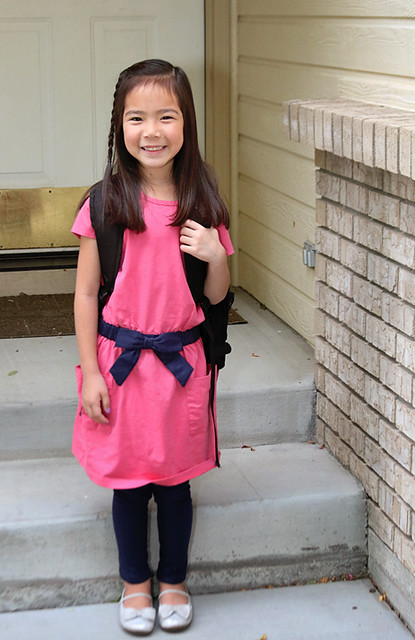