A few months ago a friend called Josh and said that she was auditioning for a play that our church was putting on and wanted to know if Josh wanted to tag along. He had nothing better to do that morning, so he said sure. He got there, auditioned, and the next thing he knew he had one of the bigger parts!

So he has spent the past couple of months working really really hard to memorize his lines and has spent a lot of time at play practice. It was a Christmas play about the birth of Christ called Savior Of The World. I honestly didn't know a whole lot about it, except that it has been taking up a lot of his time lately, so I was excited to go on Wednesday and see it.

They performed it for about 1,000 people Wednesday night. He did an amazing job! This is the first time he's ever done anything like that. The whole play was beautiful and it was so fun to see him on stage.

Here are two pictures from the dress rehearsal! 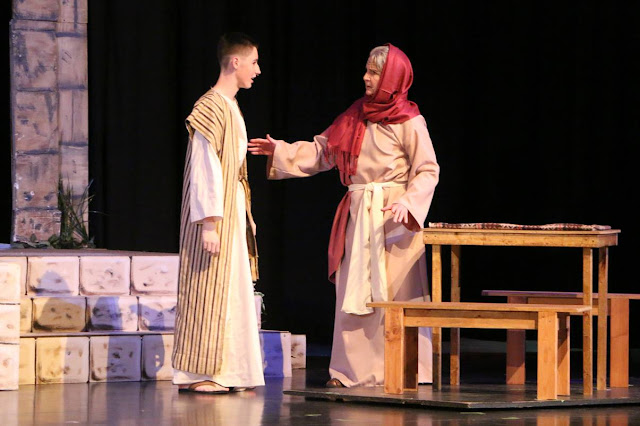 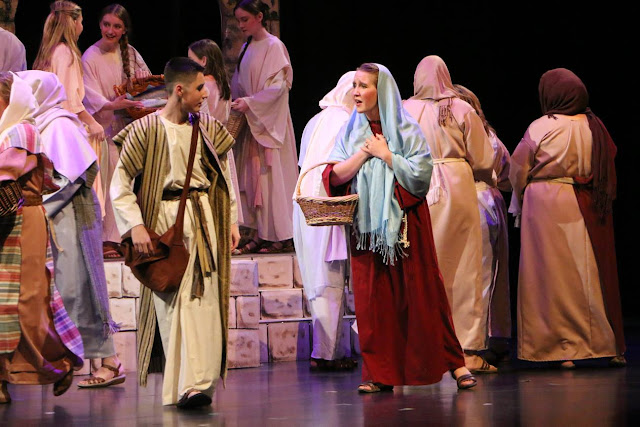 Then last night was Matthew's piano recital. He has been working on the song Let It Be, by the Beatles for a while. I've heard this song played daily for a couple of months now. The whole family walks around humming it. He worked really hard on it and it was so fun to hear it played last night. Our piano at home isn't fancy and while it sounds fine, I always get really excited to hear him play on the grand piano at the recital hall. It sounds amazing on a fancy piano! I was really proud of him for all his hard work. Here's a video of his performance!

He also performed the song he wrote, Summer Storm, last night, which was really fun. It's fun for him to be able to share his talent. He really loves to perform for people, and I love listening to him play.

So it was a fun week watching the boys perform and share their talents in public! I'm really proud of both of them.
Posted by Wendy at 10:51 AM

Wendy - your play pictures are fantastic! We've talked cameras before and upon your review, I bought the Canon 70D and absolutely LOVE it! Indoor pictures with tricky lighting are so tough! Would you mind sharing what lens and settings you used to get such great shots?

Actually, I didn't take those photos! Someone at the dress rehearsal did. But I totally hear you on taking photos in tricky lighting. Lighting is the biggest hurdle for most photographers. One thing I really love about the 70D is the ISO capabilities. Sometimes you really have to crank up the ISO in low light situations. The 70D usually does really well even at higher ISO's. Much better than my old DSLR's did. It also helps in a lot of situations to have a speedlite flash with a diffuser. I have a big diffuser on mine that looks kind of weird, but does a great job giving more light without making it too harsh. It has saved me several times.

I hope that helps a little! :)

I've been taking pictures of my daughter's choir rehearsals and I've used that as an opportunity to play with the settings a lot and using my mounted flash. I'm getting better! Thanks for the input!